A Sense of Place: Mike McCabe Runs For Wisconsin Governor

CURTISS, Wis. — It was an unusual place to be headed – down a state highway, past the half-harvested cornfields of Wisconsin on a late summer, sunny weekday morning. The ultimate destination came after a mile down a dirt road, about five miles outside the tiny town of Curtiss, Wisconsin in Clark County. For it was there that Mike McCabe, former director of the government watchdog group Wisconsin Democracy Campaign, was making his “official” announcement for his run for Wisconsin governor. 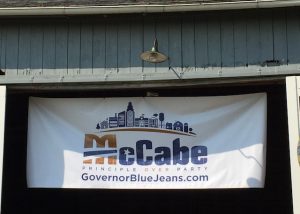 Not a likely place to hold a news conference, with members of the “big city” press having to travel multiple hours to find the old McCabe family farm. But the right place for this man at this time – to make an announcement that ultimately is geared to helping Wisconsin find its way out of its current poisoned political culture.

“First of all, this is where I grew up; this is home, so coming here feels natural to me. I grew up and learned about life here,” said the author of Blue Jeans In High Places: The Coming Makeover of American Politics. “I planted and harvested in these fields. It’s places like this that made me the person who I am. And today, it’s places like these that are treated by people who run the state capitol as though they don’t even exist. For me, there’s a special draw here (in Curtiss). I know it was unconventional choice to hold a conference down a gravel road. But for me it was important to come to where my roots are and to come to a place where no one else holds press conferences and where no one else comes and talks to people. That’s exactly why I should be here.

“People from these areas are forgotten and ignored. People in places like this don’t have lobbyists working for them at the capitol; they don’t host $1,000/plate fundraisers. People here have the common sense to know that there’s no plate of food worth $1,000,” he said. “We’re close to 200 miles away from the state capitol, but it may as well be a million miles. People here feel as though their interests are being ignored and their needs have been forgotten. And that’s why I’m running for governor. We have to have a government that works for all of us – not just the wealthy and privileged few.”

Not an easy task for McCabe, who remains an independent but who has chosen to run in the Democratic primary (in August 2018). But it’s a challenge he is embracing.

“This has been months in the making,” he noted. “I heard from people all over the state (Appleton, Green Bay, Racine), who said to me, ‘we need you to run for governor.’ They saw in me some of the qualities they were looking for, the change they wanted in leadership. And for the longest time my answer was ‘no.’

“What changed that was they wouldn’t take no for an answer. They kept pushing me and actually started a draft movement; they started up an online petition; they just wouldn’t take no for an answer. I realized as I traveled the state and talked to more people that there is a hunger out there to break the mold. They don’t want the same recipe that’s been offered to them over and over again. And I finally said to them, if you’re willing to make this journey with me, I’m willing to do it. If I had encountered ambivalence or if they had told me they were thinking of supporting someone else, I wouldn’t be here today. What I found was ‘you’ve got to do this and we’ll do this with you.’ The hunger for change is so strong.”

Nor is McCabe deterred from the fact that rural communities such as Clark County are typically a solid red block nationwide and in Wisconsin. In 2016, Clark County voted 63.8 percent for Donald Trump. However, it is McCabe’s understanding of the human condition that makes his appeal so strong. He knows the need of voters, indeed all of us, is to be heard and the need to feel as though we matter.

“When I was a kid, we elected Democrats to represent this territory,” McCabe said. “Now it’s represented solidly by Republicans. But today I believe people feel they are being ignored and left out by both parties and they are frustrated. I don’t think it makes sense for Democrats to stop listening to people and talking with people in areas that have recently voted heavily Republican. In the end what people want is for their voices to be heard; for someone to listen to them and to know someone is working on the problems they face and who can help them deal with their challenges.

“My goal is to give people a chance to be thrilled to cast a ballot for a change.”

“They aren’t bound to one party or another. I don’t care who’s been elected in the past. I want these people to feel like they have a seat at the table and authentic representation at the state capitol. For me, the idea you should campaign in one area that you can only harvest the most votes is offensive. I find that if you talk to people and listen to what’s on their mind that they respect being heard and that they respect that someone is willing to listen to them and reach out to them. And that’s what this campaign is going to be about.

“We have a political system that has been corrupted; that’s broken. It’s not working for average people. It’s a system that has become poisoned. And we have to change that. We have to challenge the political forces that have made the system the way it is today. One of the things I’m committed to in this campaign; one of the goals of this campaign is to give people an opportunity to feel good about voting for a change. Lord knows, so many people feel doomed to hold their noses and vote for the lesser of two evils when they go to vote.

And, there’s no shortage of topics on what ails Wisconsin after eight years of Scott Walker.

“Anyone you talk to, anywhere you go, people are worried about the future of our state,” McCabe said. “People are on edge. This place that I have called home my whole life is in trouble. Wisconsin has lost its way, slowly but surely becoming a shadow of its former self. It was a place known for years as a beacon of clean and honest government. Today we have watched corruption seep into the system and poison our political culture. Wisconsin used to be an industrial powerhouse and now we are dead last in the nation in business development for three years running. We were a state known for clean air and water and today you go to places in Wisconsin and there are people afraid to drink what comes out of their own water faucet. We have lakes and streams drying up in Wisconsin and we’re watching people who are looking at this state that they’ve called home and are having a harder and harder time recognizing it as the place they grew up. I’m having a harder and harder time recognizing it as the place I grew up.