We Are Not Made For War

The message hasn’t changed.  Whether you were part of the Peace Movement in 1927, the 1960s or today, the memo remains the same:  We are not made for war.

For anyone committed to a peace and non-violence, Saturday’s 10th annual Peacestock gathering at the Windbeam Farm in Hager City, Wisconsin (about an hour’s drive from Minneapolis) was like heaven.  It was also a reminder that the institutions the promote war will not simply go away.  It will take continued and sustained activism by those of us today who want an end to war. 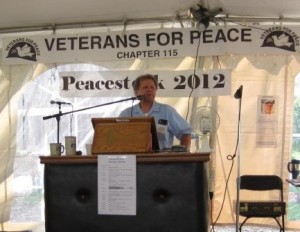 Father Ray Bourgeois: Our conscience is our connection to the divine.

Father Roy Bourgeois, peace protestor extraordinaire and peace activist and author David Swanson delighted the crowd with their talks centered on the continued need to work for peace.  Swanson, author of the book War Is A Lie, spoke eloquently about the Kellogg-Briand Pact of 1928, which was an international agreement to outlaw war and which was a direct result of the Peace Movement activities from 1927.  Don’t exactly remember the Kellogg-Briand Pact?  Swanson calls it intentional forgetfulness of history and he is correct.  But it’s all there – as Swanson noted, even on our State Department’s web site.

Swanson, who was our June Progressive Profile, powerfully concluded his speech by saying:

“We need to recognize that war is not in our genes. It’s a relatively new creation, sporadically present and absent in various societies, avoided when we choose and not otherwise. It’s not created by mystical forces of history or population or resource shortages or testosterone. It’s created by a culture’s tolerance for it, or tolerance for an unrepresentative government that engages in it. That’s our situation. War is a creation of the 1 percent that recruits members of the 99 percent to support it, as well as to do the dirty parts. War and the weapons barons and the oil oligarchs and the Wall Street banksters and the corporate media and the big business lobbies and the crowd of court jesters and sycophants in Washington who claim to be our government: they look more powerful than they are.

“They’re afraid of their own shadows. Six years ago they were secretly telling each other to end the wars before we gained more strength. Instead we switched parties and went home, while they breathed a sigh of relief. Yet, now, again they are scared of everything we do. They’re spying on every word, comprehending little. What they understand is resistance. Frank Kellogg never understood the Outlawry of War, but he didn’t have to. He just had to do what the people demanded. There are more of us in any small town than there are of them in the whole country. We need to realize our strength.”

I encourage you to read his entire Peacestock speech, which is posted at his blog here.

Bourgeois, a native Louisianian and Maryknoll priest for more than 40 years is also a Vietnam veteran turned peace activist after seeing first-hand the horrors of war in the 1960s. Reflecting back on his youth growing up in segregated Louisiana, he said.  “Our silence was the voice of complicity.” And he vowed after Vietnam never to be silent again.

In 1980 Bourgeois became involved in issues surrounding US policy in El Salvador after four US churchwomen–two of them his friends–were raped and killed by Salvadoran soldiers. He became an outspoken critic of US foreign policy in Latin America. Since then, he has spent over four years in US federal prisons for nonviolent protests against the training of Latin American soldiers at Ft. Benning, Georgia.

After the killing of six Jesuit priests, their housekeeper and the housekeeper’s teenage daughter by rebels trained at the School of the Americas, Bourgeois founded the School of Americas Watch, an office that does research on the US Army School of the Americas (SOA), now renamed the Western Hemisphere Institute for Security Cooperation or WHINSEC, at Fort Benning. Each year the school trains hundreds of soldiers from Latin America in combat skills – all paid for by U.S. taxpayers.

“It’s a new name…but the same shame,” he said of SOA today.

“If you expose injustice with peace and love in your heart, you will not fail, he told the crowd Saturday, acknowledging many from Minnesota and Wisconsin who have made the trek to protest each year.

After 22 years of a non-violent protest to close the School, after hundreds of talks around the world about the work of war and killing that goes on in the name of American people, the School remains open.  But Bourgeois noted several rays of hope netted from his relentless pursuit of non-violence.  In 2007, Bolivia pulled out of the School of the Americas and just last month Equator also announced its withdrawl.

“In a couple of months we will be going to Nicaragua and then on to Peru,” Bourgeois said.  “We are not going away.”

Lest you think Father Bourgeois concentrates only on injustice done by the US military, just ask the Vatican.  Bourgeois is an outspoken critic of the Catholic Church’s refusal to ordain women and the Church’s staunch support of anti-gay legislation.

“The root of this teaching (non-ordination of women) is sexism,” Bourgeois said.  “And having grown up with racism in a small Southern town, I can say sexism, like racism, is wrong.  It is discrimination and it is not the way of a loving god who has called us all equal.  No one can say they are superior to anyone.”

“This is serious stuff,” he said in reply to the Catholic Church’s support of anti-gay legislation making its way through state constitutional amendments.  “They are using Church money to discriminate and that is not what god teaches.”

Father Roy’s personal journey of conscious-raising is captured in his new book My Journey from Silence to Solidarity.  More information on the book can be found here.