100 Years Ago We Thought Very Differently About The Pope

Growing up Catholic I assumed everyone knew about the anti-Catholicism that raged in this country a century ago. Catholic discrimination then was fueled by anti-immigration fervor of the late 19th and early 20th centuries, the growth of the Ku Klux Klan, and fear. As a youngster, I learned about this discrimination while a student in Catholic grade school and by my parents and grandparents who had lived through it. Didn’t everyone grow up with stories about the 1928 Al Smith presidential run?

That’s why with the visit of Pope Francis to the United States this week, I am mystified that many Catholics and non-Catholics have little recollection of virulent anti-Catholic/immigrant sentiment in this country not all that long ago. The idea of the Pope speaking before a joint session of the U.S. Congress 100 years ago was absolutely unthinkable. 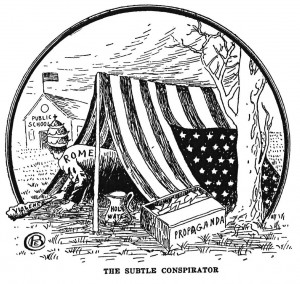 A 1926 anti-Catholicism cartoon tapped into American’s fear of the Pope.

Take for example, the following:

…One of the Klan’s major allies included Bishop Alma Bridwell White, a former Methodist turned evangelical preacher from Denver who, after divorcing her husband, formed her own church—The Pillar of Fire—in 1917 with headquarters in New Jersey. The Klan supported her because of her viciously anti-Catholic magazine, The Good Citizen, which began publication in 1913. The New York Times called her the only woman bishop in the world and Bishop White called Catholics “toe kissers” and “wafer worshipers.” Unless America fought Rome, “we shall be swept into paganism,” she wrote.

To the Klan, the pope was a bigger threat than German Kaiser Wilhelm because the pope already had “foreign emissaries” operating in the United States in the form of parish priests. Klan propaganda claimed that every time a Catholic family had a newborn male child, the Knights of Columbus donated a rifle to the Catholic Church. Another circulating story said that steeples on Catholic churches were built so high so that they could rain gunfire down on Americans when the pope declared war against the Protestants. One rumor even suggested that the sewer system at Notre Dame was actually a gigantic arsenal filled with explosives and heavy artillery. [Coach For A Nation: The Life and Times of Knute Rockne]

It’s hard to imagine today that one of the country’s foremost Catholic Universities — The University of Notre Dame — and its premier football team actually came of age during this intense anti-immigrant, anti-Catholic era. In fact, Notre Dame’s 1924 football champions (the first of their 11 national championship teams) began its football season with the goal of countering bad publicity generated from an ugly brawl in May 1924 in South Bend between the KKK and Notre Dame students. The Klan was specifically sent to South Bend with the intent to incite a riot with the “Catholic hooligans.”

The 1924 (Indiana) state political scene offered (David Curtis) Stephenson what he viewed as an opportunity to make inroads in an area in which Klan organization was weak. Stephenson and other Klan leaders decided something needed to be done in order to persuade state Republican convention delegates to accept the anticipated primary election victories of Klan-endorsed candidates as politically correct and irrevocable. Stephenson’s solution was to stage an incident during the two-week interval in May between Indiana’s primary election on May 6 and the opening of the Indiana Republican Convention in Indianapolis on May 21. He hoped that such an event would provide evidence of Catholic aggression and would solidify the hold of Klan-endorsed candidates for state office. The message from the Klan was clear: Proudly show the hooded robes of the Klan, but do nothing to incite the local populace. South Bend proved to be the likely setting for such a confrontation, and when local Klansmen agreed to host a tri-state meeting in South Bend for Klan members and their families on Saturday May 17, 1924, the stage was set. [Coach For A Nation: The Life and Times of Knute Rockne] 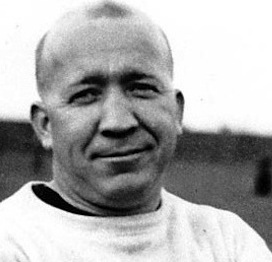 A tense two-days ensued in which the Klan used an electrical fiery cross outside of their South Bend headquarters; agitation ensued, scuffles broke out and eventually priests from Notre Dame were able to coach students back to campus. In order to combat the negative publicity from that event, Father John O’Hara, Notre Dame prefect of religion, looked to football coach Knute Rockne to help showcase how well behaved young Catholic men could been seen. Thus began a 1924 football season that would take Rockne and The Four Horsemen from New York to Los Angeles and an undefeated season much to the delight of Catholic immigrants nationwide.

Ever wonder why there was such a huge gap in the football rivalry between Notre Dame and Nebraska? The two perennial powers stopped playing in 1925 because of continued anti-Catholic, anti-immigrant harassment received when Notre Dame traveled to Lincoln for games.

The (1925) season of highs and lows ended on Thanksgiving Day in Lincoln, Nebraska, where the Irish were again subject to heavily anti-Catholic chants. This sentiment came as somewhat of a surprise to university officials who assumed the verbal abuse and harassment would wane after Notre Dame’s warm reception in Lincoln following the 1925 Rose Bowl win (after anti-Catholic sentiment met the Notre Dame team in 1923 in Lincoln). When the Notre Dame team and fans arrived in Lincoln, they were genuinely shocked by public displays of animosity against them. Anti-Catholic, anti-Irish epithets were reported from every corner of the stadium. And at halftime, a group of Nebraska students pulled a stunt that desecrated the celebrated Four Horsemen and Irish Americans in general. Four Nebraska students, each carrying a brick-mason’s hood and riding ersatz horses, galloped around the field to the delight of the partisan crowd. Their message was clear: Notre Dame football players were better suited as menial laborers than college students, and Irish Americans were similarly meant for the lowest rung of society. The stunt was stunning in its tastelessness, and it caused more of a reaction than the Huskers’ 17-0 victory that day.

Notre Dame officials were incensed over the depiction, figuring that someone in the Nebraska administration must have approved the stunt. When the team returned to South Bend, Dean James McCarthy advised President Walsh that members of the athletic board believed Nebraska should be dropped from the schedule and the series ended. Although Nebraska football coach Ernest Bearg blamed the decision to drop the series on “disgruntled gamblers in South Bend” who were tired of losing their money, Notre Dame officials decided the ethnic halftime insult could not and would not be forgiven. The game scheduled for 1926 was dropped, and all negotiations for future games ended. [Coach For A Nation: The Life and Times of Knute Rockne] 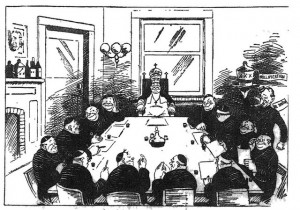 Didn’t everyone grow up learning about why Al Smith lost the 1928 presidential election?

Prominent Catholic universities and their football programs were anything but a guaranteed entity in this country just three generations ago. A Pope speaking before a joint session of Congress addressing such topics as immigration? An impossible thought less than 100 years ago becomes reality today.

Wouldn’t you love to be around 75 years from now to see what we’ve learned?

Note: Above excerpts are from the book Coach For A Nation: The Life and Times of Knute Rockne. For more information on the book, click here.

This entry was posted in Social Justice, Thoughts on Life and tagged anti-catholicism, immigration, Pope. Bookmark the permalink.