So much deserved praise these days for the Broadway hit Hamilton. A masterful success by the genius Lin-Manuel Miranda. All this talk of Broadway musicals and American history sent us back to our old favorite 1776, which premiered in 1969.

The story is based on the events surrounding the signing of the Declaration of Independence. It dramatizes the efforts of John Adams to persuade his colleagues to vote for American independence and to sign that historical document. Of the many wonderful songs in the play, Is Anybody There? reverberates in our heads these days. It’s the refrain from General George Washington as he continues to send dispatches to the Continental Congress in Philadelphia. 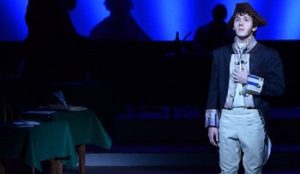 Washington, isolated from the politics of his day, pleads with this fledgling Continental Congress for action, as well as money to fight the war for Independence, and any sign of encouragement that this revolutionary idea of a break from Establishment Rule may actually happen.

A powerful scene in the play occurs when Adams, alone in the chamber, re-reads the dispatch from Washington, and echoes his words, (“Is Anybody There?”) Discouraged but determined, Adams declares his vision of his new country: “Through all the gloom, through all the doom, I can see the rays of ravishing light and glory!” Delegate Dr. Lyman Hall of Georgia unexpectedly returns to the chamber. He tells Adams “In trying to resolve my dilemma I remembered something I’d once read, ‘that a representative owes the People not only his industry, but his judgment, and he betrays them if he sacrifices it to their opinion.’ It was written by Edmund Burke, a member of the British Parliament.” Hall then walks over to the tally board and changes Georgia’s vote from “nay” to “yea”.

After our topsy-turvy 2015-16 political scene, there can be little doubt we are going through another political revolution — in essence the growing pains for the 21st century. People are clamoring for change from The Establishment Rule of our day. As the “enlightenment” of 1776 brought historical change, so too do we stand on the cusp of another political revolution positioning us to move to uncharted waters.

We ask today — Is anybody there to hear the cry of the people for the end to corporate, multi-national rule via trade deals like the Transpacific Partnership that perpetuate a race to the bottom for the working class? Does anyone care that a majority of the people wants a single payer health care system in this country? Does anybody see what I see as we see stand on the brink of a planet overheating at a record pace?

Why yes. Bernie Sanders has ignited our political revolution, and has given voice to tens of millions who say we are here and we care and we see that Establishment Rule will no longer suffice. Bernie has ripped the facade off of a Democratic Party that has wandered so far from its roots that it is basically unrecognizable to the working class and poor of this nation. He has exposed the lies of Reaganomics and the Republican Party. He has clearly called for a revolution – stating over and over and over again at his rallies that his campaign is about “Us” not him alone. “There’s a spirit out there among the people that is sorely lacking in this Congress,” John Adams utters in the play. That sentiment rings out loudly and clearly as well today.

Revolutions – whether in 1776 or 2016 – do not happen in one election cycle. To paraphrase it another way, this is a moment for the movement. Will Bernie Sanders win the Democratic presidential nomination? Will he run as an Independent? Anyone who tells you they know what will happen in just a few months is lying to you. Yes, it matters if Bernie wins the Democratic Party nomination. And no, it really doesn’t matter. Bernie has awakened the people; Bernie has shown that the power lies with the people. No different than in 1776.

If Bernie finds himself in the Oval Office in January 2017, the 21st century American Revolution will be well on its way. Should he fail to take the White House, the people’s movement cannot be stopped. Whoever occupies that space will be swallowed by a movement poised to reclaim its proud progressive history.

Similar to 1776, Establishment Politics and Rule in 2016 will not hold or will not hold for long. Politics as usual has been washed away by someone who had the courage to be there, to care and to see (and observe) the need for change