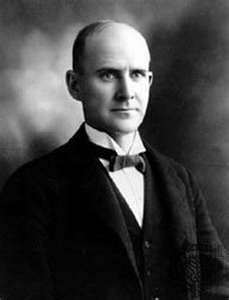 Eugene V. Debs: The grandfather of the Occupy Movement His life and words give hope to us today.

How different are the times we live in from those of past generations?  Are the challenges we face today of the 99 percent vs. the 1 percent or the overtaking of government rule by millionaires and billionaires that much different than other times in our nation’s history?

I know for me it seems that we are at a precipice unlike any I remember.  And yet for the past year or so I find myself being drawn back to a time nearly 100 years ago that has an eerily similar look and feel to what we are experiencing today. I know for me, this was one of my least favorite periods in American history. Who wanted to study Robber Barons and abuse of the working class when we were living through the hey day of a vibrant middle class with union wages and a public education system geared to support and educate all of us? Surely, this was ancient history and we would never be doomed to repeat the mistakes of that time.

Perhaps it was the Wisconsin demonstrations that started after the Koch brothers-funded election of Scott Walker and his radical anti-everything legislation pushed hundreds of thousands to the streets.  Was it just me, or did you not hear the spirit of Robert M. (Fighting Bob) LaFollette in the voices and speeches of those fighting for worker rights and human rights in Wisconsin? Few spoke more passionately for moving corporate control out of politics than the Progressive Movement’s Fighting Bob.

Wisconsin struck the first chord in a people’s movement that ultimately led to Occupy Wall Street  last fall.  We now await spring of 2012 and what many of us hope will be revitalized demonstrations that will hearken back to the man I’d like to call the original occupier – Eugene V. Debs. We are delighted to feature him as our March Progressive Profile.

Debs and LaFollette were both stalwarts of the American Progressive Movement and are both featured in my book Wisdom of Progressive Voices. The courage demonstrated in the fight against the corporate control of their time is being resurrected by a new generation struggling to keep our democracy from turning into an oligarchy.

In his book Democracy’s Prisoner:  Eugene V. Debs, The Great War, and The Right To Dissent, Ernest Freeberg describes the time of Debs’ incarceration for speaking out against the U.S. involvement in World War I as that of a conservative reaction in which people were governed more out of fear than out of hope.  Debs was 62 when he was sentenced to 10 years in a federal prison for violating the Espionage and Sedition Acts of 1917-18; laws passed by Congress to promote the war by banning anti-war speeches.  As Debs awaited his appeal to the Supreme Court, Freeberg notes:

“…Debs did not expect that his appeal would provide either liberty or justice.  The real fight for free speech he believed would not be won in lawyers’ briefs, but on street corners, public squares, and factory floors.  This was ultimately a battle, not for individual liberties as defined by the courts, but for control of the entire democratic process, at the ballot box and in the workplace.”

Our March profile provides a brief look at the man known as the champion of the working class for his work in organizing, for fighting for social justice and for serving jail time because he dared to speak out against a war he said was being fought for profit and not to save democracy. I greatly enjoyed my trip to the public library to check out books and read more on this great American hero. I urge everyone to rediscover the joys of the public library – whether via kindle or checking out a book – before the public library faces the challenge of privatization.

A look back can help us see where we are today. It also offers hope that the challenges we face will eventually lead to a brighter future. Can anyone doubt Debs’ spirit and fervor lives in the Occupy Movement of today? As he told the judge before sentencing for his violation of the Sedition Act of 1918:

“I can see the dawn of the better day for humanity. The people are awakening. In due time they will and must come to their own.”

This entry was posted in Democracy, Labor, Social Justice, Thoughts on Life, Unions. Bookmark the permalink.