A Wrong Turn Took Us Down Progressive Memory Lane

“If we value the pursuit of knowledge, we must be free to follow wherever that search may lead us. The free mind is not a barking dog, to be tethered on a ten-foot chain.”

–Adlai Stevenson, speech at the University of Wisconsin, Madison, October 8, 1952

We don’t often travel at the holidays for a variety of reasons. But we found ourselves this year on the road at Thanksgiving– mostly to reassure our two adult daughters that love can still trump hate. So shaken were the pair by the recent presidential elections, we decided hugs (literally and figuratively) were in order.

It was on our way to the site for the family gathering in Libertyville, IL, that we made an unexpected turn. After a miscue on directions, we needed to literally “turn around”; so we opted for the next available driveway as the best option. Little did we know that as we did so, the first thing we would see outside a slightly open gate around the property was a sign that read: “Lake County Historical Society” and “Welcome to the home of Adlai Stevenson.”

Turkey could wait a bit…our family of history lovers needed no prodding to venture further down the driveway. The historical home was not open on the holiday but as the solo visiting crew, we parked and took the inviting walk around the grounds. The stillness of the day was a powerful reminder – as if to say, welcome to a safe house for progressive thought. 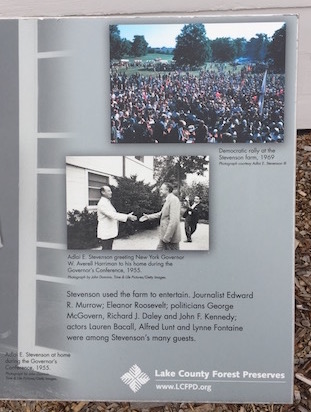 One of many informative stops along the historic home tour.

I stare daily at a framed picture my father gave to me. It is of a young man walking down a railroad track with the above quote from Stevenson on it. But even I had to admit it had been awhile since I had thought much of the former Illinois governor and two-time Democratic nominee for president in the 1950s. And what better time to remember than November 2016 on hallowed grounds that had seen the likes of the Kennedys, Roosevelts, and Harrimans walk before us.

For those who need a more comprehensive look at the life of one of the leaders of the Democratic Party in the 1950s and 60s, we invite you to click here. Stevenson was known for his wit, his intellectual speeches, and liberal political convictions. His career of “public service” began in 1933 when he first went to Washington as part of the “best and brightest” summed by President Franklin D. Roosevelt to help formulate the New Deal. For many of my parents’ generation, he symbolized a conscience in politics. How we yearn for just a fraction or thimble full of Stevenson’s character today. 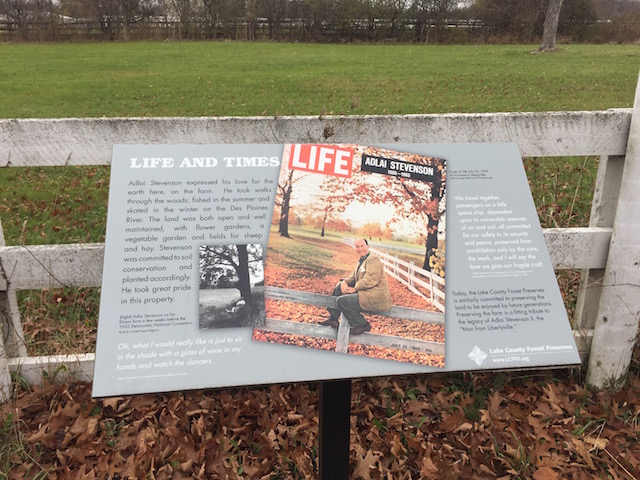 Life magazine used a photo of Stevenson at his home on its cover to honor Stevenson upon his death in 1965.

His family’s political background stretched back for generations. He was a grandson and namesake of a Vice President of the United States–the Adlai Stevenson who held the office in the second term of Grover Cleveland’s Administration. Through his mother, he was a fifth-generation Illinoisan, a grandson of Jesse Fell, who was the first to propose Abraham Lincoln for the Presidency.

Educated at prep schools out East, he graduated from Princeton before earning a law degree from Northwestern. During his gubernatorial term, which began in 1949, it was said he purchased only one new suit. A hole in his shoe, which was a trademark of his White House campaign in 1952, was another example of his frugality. His unsuccessful runs for president vs. Dwight Eisenhower (1952 and 1956) did not deter him from carrying the ideals of the New Deal forward. Journalist and political writer David Halberstam later wrote: “Stevenson [was] an elegant campaigner who raised the political discourse” and that in 1952 “Stevenson reinvigorated [the Democratic Party] and made it seem an open and exciting place for a generation of younger Americans who might otherwise never have thought of working for a political candidate.”

He served as UN ambassador for President John F. Kennedy in 1961. Stevenson is perhaps best known for his confrontation with the Soviet Ambassador Valerian Zorin during the 1962 Cuban Missile Crisis. Stevenson forcefully asked the Soviet UN representative if his country was installing nuclear missiles in Cuba, and when Zorin appeared reluctant to reply, Stevenson punctuated with the demand, “Don’t wait for the translation, answer ‘yes’ or ‘no’!” When Zorin replied that “I am not in an American court of law, and therefore do not answer a question put to me in the manner of a prosecuting counsel…you will have your answer in due course,” Stevenson retorted, “I am prepared to wait for my answer until Hell freezes over.”

After Kennedy’s assassination, Stevenson found himself at odds with Lyndon Johnson over Vietnam policy and Stevenson pondered his exit from the UN post. In July 1965, Stevenson traveled to Geneva, Switzerland, to attend the annual meeting of the United Nations Economic and Social Council. After the conference he stopped in London for several days, and on the afternoon of July 14, while walking in London, Stevenson suffered a massive heart attack, and died later that day of heart failure at St George’s Hospital. He was 65 years old.

Lest we forget…we once believed in “public servants” and “public service.” Good to know there is a peaceful spot off the road in Libertyville, IL that is there to help us remember.

“We travel together, passengers on a little space ship, dependent upon its vulnerable 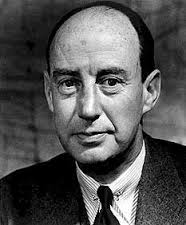 resources of air and soil for our safety to its security and peace, preserved from annihilation only by the care, the work and I will say the love we give our fragile craft.”

“My definition of a free society is a society where it is safe to be unpopular.”

“A hypocrite is the kind of politician who would cut down a redwood tree, then mount the stump and make a speech for conservation.”