An Attorney For The Damned

Today’s headlines scream of a new gilded age; worker rights and the poor are being assaulted almost daily. Now may be the time to reflect when we as a country faced similar situations and to remember there were handfuls of individuals that realized our time spent on earth should be used for something other than making money.

It was a time when conservative thinking lambasted scientific thought and reason. Immigrants were under assault. The death penalty awaited “anarchists” who dared to speak out for livable wages and against corporate rule taking over the United States.  The interests of politicians and industrialists ran in tandem.

Clarence Darrow: “It seems to me and for me that I have no right to save myself when the injustice is so great.”

It was also the dawning of the American Progressive Movement, a time in which notable individuals fought for “we the people” against the greed and power of their day. One such individual was Clarence Darrow, born in Kinsman, Ohio, on April 18, 1857, and often referred to as the “attorney for the dammed.” He earned his mark in history by defending the lost, the unpopular cases, the murderers, anarchist, the innocent, and the guilty.

The Scopes Monkey Trial could be considered Darrow’s most famous case.  In 1925 Darrow defended Tennessee high school teacher John T. Scopes who tried to teach the theory of evolution despite a newly enacted state law that forbade it. Raised in a small Ohio town by a father who was an atheist, Darrow said:  “The fact that my father was a heretic always put him on the defensive. We children thought it was only right and loyal that we should defend his cause.”

Darrow entered the Scopes Trial on the heels of his successful argument against the death penalty in the Richard Leopold-Nathan Loeb trial in Chicago that had fascinated the nation the year before. His days-long closing arguments delivered without notes won miraculous reprieves for men doomed to hang for their senseless murder of 14-year-old Bobby Franks. Darrow abhorred capital punishment, which he viewed as premeditated murder by the state. He saw it as not only morally wrong but also futile because it did not deter crime, nor did it address what he believed to be the underlying root causes of crime such as poverty, inequality, and human beings being driven by emotions they could not control.  “I am pleading for the future. I am pleading for a time when hatred and cruelty will not control the hearts of men, when we can learn by reason and judgment and understanding and faith that all life is worth saving, and that mercy is the highest attribute of man,” he said in his concluding attempt to save the young pair from the gallows. 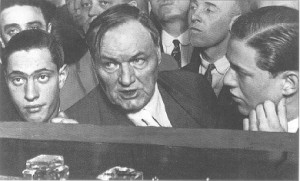 Darrow argues against the death penalty in the famous Leopold-Loeb murder trial of 1924.

But it was his rejection of the “easy life” of his times that is most notable. After practicing law in his hometown, Darrow moved to Chicago. In five short years he was a general attorney for the Chicago and Northwestern Railway. But in 1892, after earning a comfortable living representing the powerful railroad, he yearned to do something important with his life. When the workers of the Pullman Railway Company went on strike in 1894, Darrow resigned his job to defend Eugene V. Debs, the president of the American Railway Union. Debs had been arrested for contempt of court arising from the strike.

John Aloysius Farrell in his biography on Darrow describes the powerful attorney as someone who felt “guilty working for a corporation where his legal skills and his boss’ clout were employed at union busting He longed for “peace of mind.” Darrow wrote to Jane Addams, social reformer of the time and founder of Hull House in Chicago: “It seems to me and for me that I have no right to save myself when the injustice is so great.”

Over the next few years, he defended strikers, labor leaders and anarchists. By the turn of the century he was a celebrity of the “radical left” of his time. He would defend Debs again in an attempt to overturn Debs’ conviction and federal imprisonment arising from an anti-war speech Debs delivered in violation of the Espionage Act of 1917.

During Darrow’s lifetime, America made its transformation from rural innocence to the age of industrial capitalism.  Within that timeframe, Darrow stood for the working men and women who suffered from the relentless economic forces of a century ago.  He once said, “With all their faults, trade-unions have done more for humanity than any other organization of men that ever existed. They have done more for decency, for honesty, for education, for the betterment of the race, for the developing of character in man, than any other association of men.”

In a time before radio and television, Darrow would speak in crowded courtrooms with a plain but emotional conviction of the nobility of man, the frailty of mankind and the threat to liberty posed by the handful of wealthy individuals and their legal guns-for-hire. “With the land and possessions of America rapidly passing into the hands of a favored few…with thousands of men and women in idleness and want; with wages constantly tending to a lower level…with the knowledge that the servants of the people elected to correct abuses are bought and sold in legislative halls at the bidding of corporations and individuals; with all these notorious evils sapping the foundations of popular government and destroying personal liberty, some rude awakening must come.”

Darrow was a complex and puzzling individual to those who knew him. On March 13, 1938, in the depths of the Great Depression, Darrow died almost penniless in his Hyde Park, Illinois, apartment. His second wife, in an attempt to sell his library and belongings for much need cash, was stunned to discover in those Depression days just how little the estate commanded.  His ashes were scattered in the lagoon in Jackson Park, on Chicago’s lakefront.

For more on this great American lawyer, check out the following links:

The University of Missouri-Kansas City

The University of Minnesota Law Library