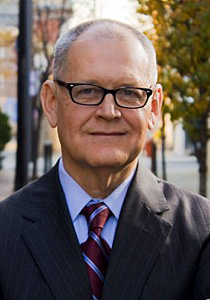 Wendell Potter: Most people are one layoff away from being uninsured.

I had the pleasure of spending time yesterday with Wendell Potter, both for a one-on-one interview and listening to him speak at the annual fund-raising dinner for Health Care for All Minnesota. Look for our July Progressive Profile to feature information and insights from my one-on-one as Potter discusses today’s health care environment and his book Deadly Spin, from which he read last night in St. Paul to a crowd of more than 200 single payer enthusiasts.

Single payer is the primary focus of Health Care for All Minnesota. Single payer is becoming a popular topic again as we await the Supreme Court’s ruling on the Affordable Health Care Act. Robert Scheer recently wrote a blog entitled: Health Care: Give The People What They Want (Medicare for all). Polls continue to show people favor single payer/Medicare for All/public options/something other than the current system. So of course that means…drum roll please…real health care reform, no matter what the Supreme Court rules, has an ice cube’s chance in hell of moving forward soon.

Why is that? Because of course, as Potter points out, the incredibly powerful influence of the for-profit insurance industry who will block any and all attempts. Potter, a former CIGNA communications executive, is one of the nation’s leading voices who speaks out about the for-profit insurance industry and its inner workings that spend enormous resources to keep its secrets away from the media and the public. He paints a deadly honest picture of what reformers are up against. He strongly urges advocates for single payer to develop a better battle plan that strategically addresses these challenges. 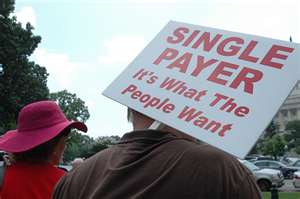 Will the people ever get what they want in health care?

“Insurance companies are going to spend enormous amounts of money in Vermont,” Potter said. Vermont recently became the first state to sign single payer into law, with implementation still as far out as 2017 – at best. “They’re doing that because they know if Vermont succeeds, Minnesota may be next.

“You’re only going to succeed,” he told the crowd, “if you start working strategically and develop a battle plan that says you know what your enemy is up to. Form coalitions. Hire people who can communicate effectively. Develop messaging that gets to people’s hearts not just their heads. Tell them why single payer is important for their families. Do some fear mongering of your own. Figure out a way to connect with conservatives. Begin to understand the importance of working strategically and reaching out and building bridges and coalitions.

“Until Americans wake up and see the corrosive effect this is having on our whole society, we can’t move forward. We have to get people to think beyond their own immediate interests. Remind them they are one layoff away from being uninsured so they start to think, ‘Wow. This makes sense.’ Everyone knows someone with a pre-existing condition…their family, their friends. People are going bankrupt because of paying health care bills. Talk to people about how this health care system impacts people everywhere.

“One of the problems we have is most people have grown up with this system and they simply don’t know a different system and they can’t believe that someone (Canada, France, Britain) has it better.”

Regardless of what the Supreme Court rules on the Affordable Care Act, Potter firmly believes the for-profit insurance companies will continue to fight back at every turn against the modest reforms made with the passage of the ACA back in 2010. He pointed specifically to a recent UnitedHealth Group tactic in which the multi-billion dollar for-profit insurance company called reporters on a Sunday night to urge them to write a story for Monday morning saying how the insurance giant was going to support the ACA even if the Supreme Court struck down the individual mandate.

“Only one of the reporters (Washington Post) realized they (UnitedHealth Group) were obscuring the reality of what they were going to do,” Potter noted.

Potter pointed out that UHG released the information and then made no official available for comment or follow-up questions. Sure, he said, UHG issued a statement that they would uphold the portion of allowing young adults to stay on their parents insurance policy until they were 26, but nowhere did they indicate that they would honor the coverage of people with pre-existing conditions or the part of the ACA that says insurance companies must spend 80 percent of their premium dollars on actual delivery of health care.

UnitedHealth Group, a current “gold member” in ALEC (the American Legislative Exchange Council) knows full well that their profits soar when they do not have to cover people with pre-existing conditions.

We are winding down the month of June – a month in which the voters of Wisconsin were bamboozled by obscene amounts of money that impacted the Walker recall. Walker went from a 58 percent disapproval rating in January to victory in June as he outspent recall efforts 7:1. Check out what happened to the California cigarette tax initiative after Big Money pumped in nearly $50 million to defeat it. The corporate-controlled Roberts Supreme Court stands poised to pile on their Citizens United ruling with a potential defeat of the modest health care reform advanced in 2010.

I know there are people who say we are just going through a yin/yang period of history. But for me, this all feels very different. Never before in my life have I witnessed such total control of money over absolutely every aspect of our lives. Where will this all end? I have no clue or answers. I have turned more than once recently to a recent article published by award winning journalist Robert Koehler. I offer it as food for thought as we wind our way to November.