We are excited on so many fronts with the recent announcement of Vermont Senator Bernie Sanders’ decision to seek the Democratic Party nomination for President in 2016. Perhaps the simplest and easiest way to understand why is that Bernie speaks for We The People and not the billionaires, the multi-national corporations, or lobbyists. We believe voters will identify with Bernie because he articulates the values of most Americans; he connects with people on their level, and his authenticity is evident because he speaks from the core of who he is. And the trust factor from voters should be off the charts because Bernie’s long-standing beliefs on economic and social justice issues have not wavered since he first began his career as a public servant. 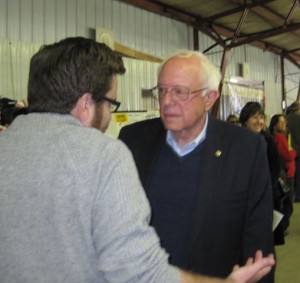 Populist candidate Bernie Sanders speaks with and for the people.

Add to that the fact Bernie has an actual agenda to help move the country forward. For more on his platform and just what he fights for, we invite to read our profile from last year when we attended a fundraiser in which Sen. Sanders was the featured speaker. At the time he sounded a wake up call for the survival of our democratic republic.

He will be able to frame the issues of today in a way that speaks to what most Americans believe — that corporations and billionaires have too much control of our government and politics; that social security should not be privatized and rather should be expanded; that income inequality has to be addressed; and that climate change is real and will impact us and our children and grandchildren.

As Matt Taibbi of Rolling Stone noted, “He (Bernie Sanders) is the rarest of Washington politicians, a completely honest person.” Or as John Nichols of The Nation reported, “He (Sanders) will create a ‘which side are you on campaign.’” And Young Progressive Voices called out, “Bernie Sanders understands that wealth inequality stands as an intersection between major issues today, including: poverty, health, education, worker rights, climate change, among others. He’s not been afraid to stand up to Democrats on issues where they have broken from the will of their base, including the Trans Pacific Partnership and domestic surveillance.” For a change-of-pace look at Bernie Sanders’ announcement and candidacy, we invite you to check out: How To Talk To Your Kids About Bernie Sanders, by clicking here.

Many of us who bring historical perspective to so many discussions these days will harken back to 1968 and Eugene McCarthy and/or Bobby Kennedy — campaigns that drove to the hearts of issues and the people. We see that same populist energy now and hope Bernie Sanders will ignite in us the hope and belief that politics and government can reclaim its proud progressive roots and values. He can re-frame issues away from right wing talking points unlike any other candidate currently in the field.

Bernie spent more than a year surveying the situation nation-wide before making his announcement. “We need a political revolution in this country involving millions of people who are prepared to stand up and say enough is enough, and I want to lead that,” he said. He believes the movement is there.

Sanders’ first official campaign stop this past weekend was to New Hampshire, where he received raucous ovations and packed audience. It was also announced that his campaign had received more than $2 million in contributions from individual small donors within the first days. The appetite is whet for an authentic candidate without ties to Wall Street, the banking industry, billionaire inheritance babies, or multi-national corporations.

I remember the first time I heard/learned about Bernie Sanders. Our local progressive radio station (AM950) in its infant days in 2006 would rebroadcast one hour of the Friday Thom Hartmann Show at 8 a.m. Sundays. That was the “Breakfast With Bernie” hour (now Thom’s famous Brunch With Bernie hour). I said to myself then, “who is this guy and why aren’t we hearing more of him?” It will be up to We The People to make sure Bernie’s issues-driven campaign breaks through the print and network corporate media walls. We finally have a candidate who will force the debate that the Democratic Party and America needs to have on a long list of issues that the billionaire class would have preferred to keep off the table.