Bernie Sanders: His Prophetic Voice Warns of Dangers to Democracy

Sunday we had the opportunity to see two of today’s wisdom voices in action. Independent Senator Bernie Sanders (VT) joined our congressional rep Keith Ellison for a fund-raiser for Ellison in Minneapolis. It was a joy — listening to these two proud progressives—for anyone looking for a ray of hope in an otherwise gloomy forecast for our democracy.

The message from Ellison (co-chair with Rep. Raul Grijalva of the House Progressive Caucus) and Sanders is fairly simple: We The People need to do the hard work of pulling back our democracy from the cliff. The recent U.S. Supreme Court decision (McCutcheon v. Federal Election Commission) compounds the already disastrous Citizens United ruling by the Supreme Court. The two combine to make the buying of our government a reality; hence say good-bye to democracy and hello to an oligarchy.

Ellison’s message was simple: Get out the vote. We here in the Minnesota 5th Congressional district have been excellent at that for the last several election cycles, but now more than ever, there can be no sitting on the sidelines in an “off year” election. And Sanders, in passionate remarks, reinforced what we all know about the Supreme Court and its decisions to allow unfettered money into politics. Overturning Citizens United and adding an amendment to the constitution that money is not speech is the only issue. There are no other issues.

“The most important issue (facing us today),” Sanders told the crowd “is not very sexy. Campaign finance reform may not be sexy but … as a result of the disastrous Supreme Court ruling (Citizens United) we now have a situation where large corporations and wealthy families like Sheldon Adelson and the Koch Brothers (Charles and David) can legally spend as much money as they want in the political process.

“What does this mean in the real world? Last year, the Koch Brothers alone saw a $12 billion increase in their wealth in one year. Sheldon Adelson increased his wealth by $11B. That’s one thing. But more frightening (than the economic inequality in our country)…in an unprecedented way…Citizens United said to the Koch Brothers and Sheldon Adelson, ‘We know you own much of the country but now you have the opportunity to buy the U.S. government.’

“That is precisely what they are intending to do. Citizens United allows them to say, ‘We’re going to spend $25 million against a Keith Ellison or $50 million in California. When your wealth increases by $12 billion in one year, what do you think $50 million or $100 million is to them. It is coffee change. They have passionate views…there is no end to the amount of money they will spend to create the kind of government and society that they want.” 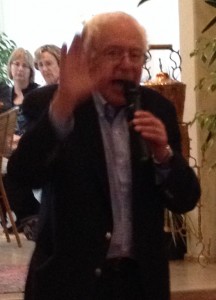 “The most important issue facing us today is campaign finance reform.”

Senator Sanders provided a provocative look at to just what the Koch Brothers oligarchy agenda looks like when he read from a staffer-researched list of what a David Koch ideas-program was when he ran as vice president on the Libertarian Party ticket in 1980. We’ll take a closer took at that frightening agenda — and what Sen. Sanders had to say about it — when we profile Senator Sanders as our May Progressive Profile. Look for that feature later this week.

“They (the Koch Brothers) have spent billions of dollars and what they have succeeded in doing is to take the ideas that 30-40 years ago that would have been considered ‘whacko’ and with the money they’ve spent they now have major political leaders echoing some of those very ideas.”

Sanders and Ellison issued a wake-up call and a warning on Sunday. It still remains up to us to make sure that the prophets’ messages of today do not go unheeded.