Bernie’s Strength & Appeal: He Really Listens To Us

Bernie Sanders “official” announcement yesterday in front of approximately 5,000 enthusiastic supporters in Vermont that he is running for President of the United States has been analyzed from dozens of political directions. Yet, there was one thing that struck me immediately as I watched that crowd of passionate followers at the waterfront park. It was the same sense I get when I watch others gathered at Bernie events across the country. 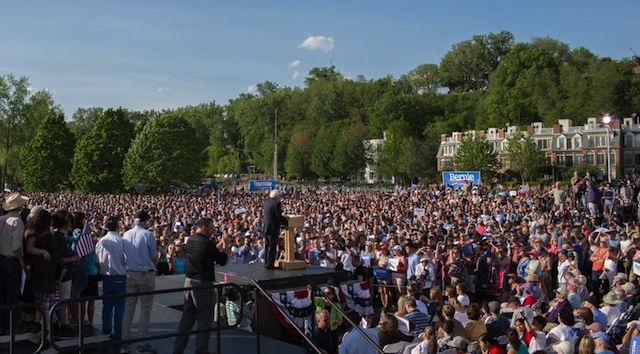 Bernie Sanders: His strength lies with his ability to truly listen to people.

What is it about the appeal of this man that resonates so strongly with so many? There’s been a recurring theme among people I talk to about what they like/admire about Bernie. People feel as though finally, someone has listened to them; listened to their concerns; and that someone finally heard them. Not a listening tour or someone who has to hone their ears to focus on what people say. It’s not lip service from Bernie. But rather people sense a man who hears from his heart and soul to the pain and frustration voiced by so many for so long.

That sent me back immediately to one of the greatest books ever written: If You Want To Write: A Book about Art, Independence and Spirit by Brenda Ueland.

And in that book, one of the best quotes ever:

“Listening is a magnetic and strange thing, a creative force…When we are listened to, it creates us, makes us unfold and expand. Ideas actually begin to grow within us and come to life…When we listen to people there is an alternating current, and this recharges us so that we never get tired of each other…and it is this little creative fountain inside us that begins to spring and cast up new thoughts and unexpected laughter and wisdom. …Well, it is when people really listen to us, with quiet fascinated attention, that the little fountain begins to work again, to accelerate in the most surprising way.”

Bernie Sanders asked us to think “big.” He said now is not the time for small ideas. I make no predictions on where this will all end; let’s follow the journey and see where it leads. But one thing is for certain: Bernie Sanders has reminded all of us how important it is to have someone listen to us. As Brenda Ueland has suggested (may I paraphrase here) – Katie bar the door on the possibilities when that energy is released.

This entry was posted in Citizens United, Democracy, Thoughts on Life and tagged Bernie Sanders, Bernie Sanders 2016. Bookmark the permalink.