In the spirit of providing a year-end review, I offer the following from 2011.  When we began our web site, the hope was to showcase the “wisdom voices” of today and to remember those whose wisdom has guided us throughout the years.  It has been our pleasure to talk to a diverse group of people in 2011 who continue to fight for the “common good” and for “We the People.” 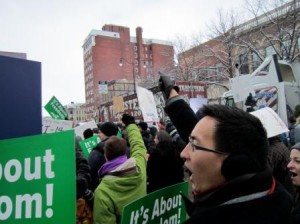 The voice of "We the People" got much stronger in 2011

There were consistent messages that emerged from those we interviewed from coast-to-coast:

In a year dominated by protests, recalls and an awakening of sorts for working class people, it was difficult to pick one person or one quote that stood above the many we presented through our interviews.

One, though, remained etched in my mind from the minute I replayed it off the taped interview from last August.  It came through the vibrant voice of Stewart Acuff, Chief of Staff and Assistant to the President of the Utility Workers Union of America (AFL-CIO).  His passion for working people and organized labor rang through loud and clear in the entire interview, which was capped with the following:

“Ultimately, we have a responsibility to stand up for human values and justice in every part of our lives”

We offer you a sampling of the great quotes we were privileged to garner this year, and we invite you to check out the full features on those listed below at The Progressive Profile.  And we look forward to the great words and insights from those we will feature in 2012.  It will be an unpredictable and memorable year.

“Let’s not forget that American democracy started with ‘We the People’ agreeing to work hard to create ‘a more perfect union.’ We’ve lost the idea that politics begins at home with what happens in families, in neighborhoods, in classrooms, in congregations. We called this democracy into being – and if we want to call this democracy back to its highest values, it’s got to be the us doing that calling. That’s not going to happen if ‘We the People’ don’t know how to talk to one another with civility and hold our differences in a creative, life-giving way.”

“It really is the grass roots groups who are doing the effective and creative work to move us into a different future.  That’s where hope really lies.  Hope isn’t rooted in the notion that we’ll elect a politician who will bring about the solution. What we need to do is activate our own potential and stop being the consumers of politics and be more the protagonists for change in what has become a really ugly system.”

“Problems come and go, and issues appear to morph over time. But they don’t really change very much at all. At the root of them all are the same human failings. Selfishness. Greed. Fear. Hatred. These need to be replaced by a sense of common good and shared purpose. And an enlightened understanding of self interest that leads us to see that we are all in this together and inspires us to think we first instead of me first.”

“For the first 200 years of our nation’s history, corporations were never defined by the courts as persons with free speech rights under the First Amendment.  Only in recent years have we witnessed this corporate takeover of our First Amendment, culminating in the Citizens United ruling.”

“One reason we find ourselves in the mess we do today is because the media have so dreadfully fallen down on their jobs over the last 10 years.  It’s beyond sad.  It’s damned dangerous.  For the last 10 years there just has been nobody home.  Yes, there were corporate takeovers of the public air waves and mergers in the news business that meant investigative staffs were let go, but still the folks who were left simply became stenographers for the powerful and it has literally killed us.  The failure of the media to do their job helped lead to wars where thousands are dead for absolutely no reason that anyone can identify today.”