Celebrating A Life of Justice, Honesty and Service

There was an amazing 50th birthday party for Jeff Blodgett last Friday (May 6) in St. Paul, Minnesota.  The in-person guests – to name a few – included:

Not quite sure who Jeff Blodgett is or why so many “dignitaries” would take time out of their incredibly busy schedules to stop for birthday wishes? 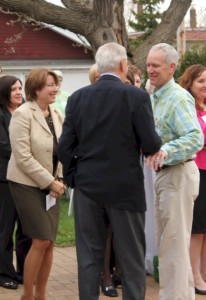 Anyone whose life has been touched (directly or indirectly) by Paul Wellstone, the great progressive U.S. Senator from Minnesota who tragically died in a plane crash in 2002, owes a debt of thanks to Jeff Blodgett.  Jeff was the campaign manager for all three of Sen. Wellstone’s elections.  Jeff was the “man behind the scenes” who coordinated Wellstone’s dramatic win over incumbent Rudy Boschwitz in 1990. That victory was considered one of the major electoral upsets of the decade.  Wellstone was outspent 7-1, and given almost no chance of winning.

Blodgett could have moved on and probably had any high-paying, prestigious campaign manager position after that remarkable victory.  Instead, he stayed with Sen. Wellstone and was leading the campaign for Paul’s re-election in 2002 when the horrific plane crash occurred.

Tears still well in my eyes when I think of that day, and I never personally met Paul Wellstone.  I can’t imagine the pain and grief that someone so close to the senator must have felt.  And then to watch for six years as Paul’s seat was held by Norm Coleman.  I’m going to bet that more than once Jeff wondered about the ironies of life.

How does someone move through all that heartache and find the strength to build a legacy for a lost friend?  I don’t know.  But Jeff did just that.  He helped to found Wellstone Action! and served as Executive Director until this past January.  Wellstone Action! keeps alive the progressive heritage of Paul and his wife Sheila (also killed in the plane crash).  Wellstone Action!’s mission is to continue their work through training, educating, mobilizing and organizing networks of progressive candidates and organizations.  Because of Jeff’s devotion and commitment, today we have the next generation of progressive politicians, many of whom have come through training at Camp Wellstone.  Congressman Tim Walz and many staffers for U.S. Senator Al Franken are “graduates” of Camp Wellstone.

Paul’s memory was very present at Jeff’s 50th birthday party; there’s no doubt about that.  I often wondered if people ever see Jeff for an individual vs. seeing him as a link to a memory of Paul Wellstone.  Although Jeff will always serve as a powerful link to the Wellstone memory, he has carved his own way and left his own indelible mark on many.

The speakers Friday were gracious and Governor Mark Dayton rocked the house with a sense of humor that should be used more often.  Each thanked Jeff in different ways.  The two that stand out in my mind came from Frannie Franken who said: “Jeff reminds us that politics isn’t about power; it’s about improving people’s lives.”

And former Vice President Mondale concluded his moving remarks by reminding all that Jeff’s life has “been about justice, honesty, and service.”

Thank you Jeff.  For keeping alive Paul Wellstone’s legacy and for sharing the great gift of who you are with so many.