Cesar Chavez: Movie Helps Remind Us Of Our Proud Progressive Past

Economic justice. Peace and non-violence. A deeply rooted commitment to the human spirit. All these words describe Cesar Chavez, one of the greatest “wisdom voices” to have lived during my lifetime. When it came time to write Wisdom of Progressive Voices, there was no question that Chavez would be included. One of the main focal points for producing that book was to help us recall the great progressives who helped to shape a world designed around something other than money, power, and greed. When we fail to tell the stories of our great progressive past, we lose the heart and soul of who we are as a people and as a country.

It is with great delight that we welcome Director Diego Luna’s movie “Cesar Chavez” to be released this Friday, March 28, just days before Chavez’ birthday on March 31. My youth was shaped in the 1960s and therefore the names of Chavez, King, and Bobby Kennedy dominated the headlines as they led marches, protests, boycotts, and campaigns focused on equality, justice, and non-violence. How and why those topics have disappeared from our national consciousness and conversations is a travesty. Our hope is that this movie sparks a reminder that we as a people can be called to think outside of ourselves and to remember we are all part of the human race. None of us is more than or less than; we are one of. 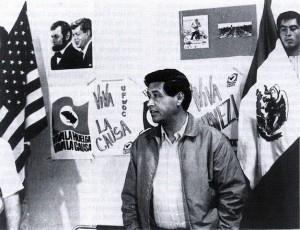 Cesar Chavez dedicated his life to the struggle for economic and social justice.

In researching Chavez’ life for inclusion in our book, it was hard to overlook Chavez’ deep-seeded faith—one founded in the great social justice values of the Catholic Church. Sometimes it’s difficult to remember that the Catholic Church once focused on issues of social justice, but they did. For Chavez, his faith is what drove his work. One of our favorite quotes from him is:

“It is possible to become discouraged about the injustice we see everywhere. But God did not promise us that the world would be humane and just. He gives us the gift of life and allows us to choose the way we will use our limited time on this earth. It is an awesome opportunity.”

Who Was Cesar Chavez?

The son of migrant laborers, Cesar Chavez was a fervent activist for migrant laborer rights and founded the National Farm Workers Association (NFWA) and later the United Farm Workers (UFW). He led a five-year non-violent boycott against California grape growers, protesting poor working conditions and the use of pesticides harmful to farm workers. Chavez was entirely self-educated. An avid reader, he was influenced especially by Mahatma Gandhi’s autobiography and, although a radical activist, Chavez adopted a philosophy of nonviolence which fit well with his deep Catholic roots. Growing up as migrant worker during the depression, Chavez experienced some of the worst America had to offer to poor minorities.

In September 1965, Chavez’s NFWA, with 1200 member families, joined an AFL-CIO sponsored union in a strike against major Delano, California-area table and wine grape growers. Against great odds, Chavez led a successful five-year strike and boycott that rallied millions of supporters to the UFW. His commitment to nonviolence was demonstrated in 1968, when, in order to avert violence in the grape strike, he went on a 25-day hunger strike that was broken at an outdoor Mass that drew thousands, including Senator Robert F. Kennedy. In recognition of his nonviolent activism and support of working people, Chavez was awarded the Presidential Medal of Freedom posthumously in 1994.

Chavez served in the U.S. Navy during World War II in the Pacific theater. After his discharge, he became active in community organizing concentrating on voter registration, citizenship classes, and helping Mexican-American communities obtain needed facilities in the barrios. His organizing and commitment to some of the poorest workers in the U.S. continued after the grape boycotts of the 1960s. In 1976, he led the UFW through a major reorganization, intended to improve efficiency and outreach. In 1984 in response to the grape industry’s refusal to control the use of pesticides on its crops, Chavez inaugurated an international boycott of table grapes. The fight continued until his death in 1993. After testifying in a court case, near his hometown in Arizona, against a large California iceberg lettuce corporation, Chavez retired for the evening at a friend’s house. Chavez died in his sleep.

Following are a few reminders of his great words and even stronger reminder to tell our progressive history lest we forget.

“We cannot seek achievement for ourselves and forget about progress and prosperity for our community… Our ambitions must be broad enough to include the aspirations and needs of others, for their sakes and for our own.”

“In the old days, miners would carry birds with them to warn against poison gas. Hopefully, the birds would die before the miners. Farm workers are society’s canaries.”

“Preservation of one’s own culture does not require contempt or disrespect for other cultures.”

“I have met many, many farmworkers and friends who love justice and who are willing to sacrifice for what is right. They have a quality about them that reminds me of the beatitudes. They are living examples that Jesus’ promise is true: they have been hungry and thirsty for righteousness and they have been satisfied. They are determined, patient people who believe in life and who give strength to others. They have given me more love and hope and strength than they will ever know.”

“We can choose to use our lives for others to bring about a better and more just world for our children. People who make that choice will know hardship and sacrifice. But if you give yourself totally to the nonviolent struggle for peace and justice you also find that people give you their hearts and you will never go hungry and never be alone. And in giving of yourself you will discover a whole new life full of meaning and love.”

This entry was posted in Democracy, Labor, Peace, Thoughts on Life. Bookmark the permalink.