“I want to be clear: Move To Amend is the biggest task I’ve ever been involved in,” said David Cobb, a member of Move To Amend’s National Leadership Team in a recent interview with Wisdom Voices. “That’s because it is the first time we (as a country) have zeroed in on not just a ‘big thing’ but on something that is a systemic/profound/root cause problem. When we win this, we will have completely shifted the power into the hands of the American people. And I trust the American people. If we go through the process, we will be able to create the culture and society based on the core values of liberty, justice and equality.

David Cobb: When we win this, we will have completely shifted the power into the hands of the American people

“Even though this is the biggest task I’ve been a part of – and I’ve been a part of a lot of big things in my history of trying to do things and being an engaged citizen, I’ve never worked on anything that’s moved faster with more success with its initial endeavor.”

Move To Amend is a coalition of hundreds of organizations and tens of thousands of individuals calling for an amendment to the US Constitution to unequivocally state that inalienable rights belong to human beings only, and that money is not a form of protected free speech under the First Amendment and can be regulated in political campaigns. AKA: getting rid of the U.S. Supreme Court’s horrific Citizens United ruling.

“I say that for two reasons. First, we recognize it’s not going to take just words, but it is going to take organizing, activism, and people willing to dedicate themselves to the effort. Second, we’ve invested time, energy and money into organizing local communities. We’re not based in DC. No social movement was ever created in or led or nurtured in DC. We’re organizing local communities to build a social movement to win.

“But I like to say he forgot to mention Step 5. That’s when everyone who said to you what you’re doing was impossible, now says, that was inevitable. The point is, today no one can fathom living in a world of human slavery, or Jim Crow segregation laws, or women not being allowed to vote. And the world we live in, that we take for granted, was the lived reality not so long ago.”

That positive energy and joy that fills Cobb throughout all of his work, is at the core of the active citizenry that has defined his life since his childhood in San Leon, Texas. Fighting for social and economic justice and the role of people vs. corporations and big money in politics runs through his veins. His community organizing and activism eventually led him to his Green Party candidacy for president in 2004. After the 2004 election, it was Cobb, not John Kerry, who demanded a recount of the Ohio presidential election, in which numerous irregularities were alleged.

It was while attending the University of Houston law school that Cobb began to see first-hand the interconnectedness of exploitation and oppression in the political and judicial systems in our country. “I learned how our system is not based on liberty, equality and justice, but explicitly promotes and protects a small ruling elite, bamboozling most of us. So I got involved in Jesse Jackson’s presidency in 1988, but then each year I realized the leadership of the Democratic Party created a primary system that essentially amounts to sending genuinely progressive politics to die.

“For all the effort you do, some corporatist, militarist gets the nomination. And we’re told as progressives to sit down, shut up and get to the back of the bus. And eventually nothing happens. In 1996, I learned about the Green Party and its four principles:

When I heard that, I said ‘that’s my politics’; it’s beyond electoral politics. It’s how I want to live my own life and how I would I’d like to engage other institutions, be they political, economical, or legal. I would like to live in a society that is transformed so that the values we hold are not just talked about (on Sundays) but are instead lived on a day-to-day basis.

Which brings us back to Move To Amend. 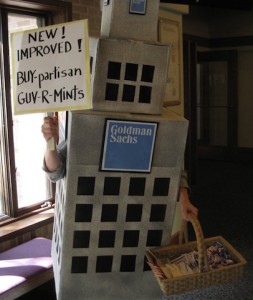 Move To Amend: The daunting task of amending the U.S. Constitution to state the obvious that corporations are not people and money is not speech.

“I saw the Citizens United ruling coming, and I knew it was going to be bad,” Cobb said. “I helped to launch Move To Amend, and it became groups coming together to say this time it has to go deeper. Corporations are not just exercising power they are ruling us. They’re making fundamental public policy decisions that are affecting our lives.”

But amend the constitution? It sounded like an almost unthinkable task when Citizens United became law. But activity to overturn it on the local, state and national level has been unceasing. We blogged about it almost a year ago. And just last week, President Obama called for a constitutional amendment to overturn Citizens United.

“On the one hand I’m surprised at how fast things have moved,” Cobb said. “But then again, I’m not because this appeals to what everyone of us believes – that the country we want to live in is not run by corporations, but rather We The People.

“We’re going to build a movement that is clear in what we are for. We’re not going to negotiate with the power structure. We’re going to grow so big and so powerful that our voices will join in such a unified chorus that we’re going to force them to accommodate us. That’s how social movements work.”

More On Move To Amend

For those who would like to take the first steps in becoming involved in this social movement, the easiest thing to do is go to Move To Amend’s Web site and sign their petition. Click here to find out more.  Want to learn more about the process of amending the U.S. Constitution?  Click here to read Move To Amend’s excellent FAQs on the topic.

And if you want to be inspired by listening to Cobb, check out the videos at Move To Amend’s site by clicking here.