Louis Brandeis, who fought so eloquently and with great passion for the common man, is our first profile.

The notion of the common good underlies most of the 20thcentury social programs we have known.  The common good is also the basis of th 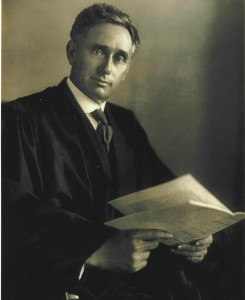 e rule of law that has served to govern man for centuries.  Perhaps no one was able to combine the wisdom and intellect of the law with the understanding of the importance of the common good better than Supreme Court Justice Louis Brandeis.

Today, more than ever, it is important to remember the story and life of Louis Brandeis.  The current U.S. Supreme Court and its Citizens United decision, which allows corporations to make unlimited financial contributions to political campaigns, is the antithesis of all that the “people’s lawyer” fought for during his illustrious career.  The idea that the government and the courts can and should regulate business and protect the citizenry is not a new or radical idea.  It is the foundation of the 20th century progressive movement, which provided solid advancements for our country.  It is also the heart and soul of Louis Brandeis.

The social and economic problems that beset our nation today are identical to the world in which Brandeis lived a century ago.  Most notable of these are the excesses of corporations and banks, business monopolies, and the plight of the average American worker. Brandeis, a staunch supporter of labor unions, believed that the large banking houses of his time were colluding with businessmen to create trusts in America’s major industries. Brandeis felt that not only did trusts stifle competition, but that they also caused businesses to operate less efficiently.

As a lawyer, jurist, economist and moralist, Brandeis fought to help shape The New Freedom of President Woodrow Wilson and fought for New Deal financial reforms of the 1930s—particularly the Glass-Steagall Act, which helped to insure financial stability for the next half-century.  This period was marked by the lowest bank-failure rate in America’s history. Glass-Steagall was undone by President Ronald Reagan and led to the savings-and-loan crisis in the 1980s.  The Gramm–Leach–Bliley Act of 1999 further repealed Glass-Steagall and was a direct contributor to the world financial collapse of 2008.

In 1914, Brandeis wrote a series of articles that were collected in book form and published under the title Other People’s Money–and How the Bankers Use It.  This marvelous collection – as true today as it was then – can be found on the Louis Brandeis School of Law at the University of Louisville at http://www.law.louisville.edu/library/collections/brandeis/node/191.

Brandeis is one of 23 progressive leaders featured in our book Wisdom of Progressive Voices (see web site for information on how to order the book).  Some of his words and ideas are featured there.  Another sampling of his thoughts and writings include the following from his True Americanism address at Faneuil Hall, July 5, 1915.

The American Standard of Living

What does this standard imply? In substance, the exercise of those rights which our Constitution guarantees; the right to life, liberty, and the pursuit of happiness. Life, in this connection, means living not existing; liberty, freedom in things industrial as well as political; happiness includes, among other things, that satisfaction which can come only through the full development and utilization of one’s faculties. In order that men may live and not merely exist — in order that men may develop their faculties, they must have a reasonable income; they must have health and leisure. High wages will not meet the worker’s need unless employment be regular. The best of wages will not compensate for excessively long working hours which undermine health. And working conditions may be so bad as to nullify the good effects of high wages and short hours. The essentials of American citizenship are not satisfied by supplying merely the material needs or even wants of the worker.

Every citizen must have education — broad and continuous. This essential of citizenship is not met by an education which ends at the age of 14 — or even at 18 or 22. Education must continue throughout life. A country cannot be governed well by rulers whose education and mental development is limited to their attendance at the common school. Whether the education of the citizen in later years is to be given in classes or from the public platform, or is to be supplied through discussion in the lodges and the trade unions, or is to be gained from the reading of papers, periodicals, and books, – in any case freshness of mind is indispensable to its attainment. And to the preservation of freshness of mind a short workday is as essential as adequate food and proper conditions of working and living. The worker must, in other words, have leisure. But leisure does not imply idleness. It means ability to work not less but more — ability to work at some thing besides breadwinning — ability to work harder while working at breadwinning, and ability to work more years at breadwinning. Leisure, so defined, is an essential of successful democracy.