Pick whatever thread you want, but they all lead down the same road.  The country’s national, state and yes, even local political campaigns today are mired in high stakes money that is drowning the concept of democracy and a government of the people, by the people and for the people.

It doesn’t matter what one’s passionate issue is.  Whether your top concern is the environment, fair labor laws or single payor health care, legislation to make effective change will not happen until the framework of campaign finance is changed from its current state.

Wisconsin offers us one shining example of people fighting to move forward against what seems like a tidal wave or insanity regarding financing political campaigns. The Wisconsin Democracy Campaign’s newest initiative is “Ending Wealthfare As We Know It.”  It is just the latest endeavor undertaking by this nonpartisan watchdog group that tracks the money in state politics, fights government corruption and works for reforms that make people matter more than money. “Ending Wealthfare As We Know It” tackles what the organization calls “legal bribery” by sharply lowering limits on the size of allowable campaign contributions to candidates for state office.

We recently talked with Mike and asked him about the continued need for campaign finance reform, the impact of Citizens United on his state and the nation, and most importantly, what we as individuals can continue to do. More on the Wisconsin Democracy Campaign can be found at their website www.wisdc.org.

Q.        With the Supreme Court decision in the Citizens United case, corporate donations to political campaigns have taken on a whole new dimension.  How has this decision impacted your organization’s efforts?

When people think of the Citizens United decision, they think of the Supreme Court opening the floodgates to even more money from corporations and other wealthy interests in our elections. That’s true enough. But another of the ruling’s equally profound impacts is that it significantly diminished disclosure of political money. It enables corporate cash to be funneled through groups that are able to keep the public in the dark about the true origins of the money. That has made it more difficult to follow the money, and has forced groups like ours to invest even more time and energy into the effort to expose where the money is coming from and how it is moving.

Citizens United also has made it necessary for reform advocates to go back to the drawing board and come up with new approaches to campaign finance reform. The kinds of laws Wisconsin and other states enacted in the 1970s and 1980s have been rendered obsolete by the courts. Even more recent reforms have to be refashioned because of how the Supreme Court has radically reinterpreted the First Amendment. Our group has put forward a new plan called “Ending Wealthfare” (www.wisdc.org/endingwealthfare.php) that breaks new ground. It is in direct response to the Citizens United decision and aims to replace the big-money plutocracy we have now with a small-dollar democracy.

Q.      The huge influence of big money on political campaigns is such an over-arching issue that impacts almost every other issue today.  Are you finding that organizations are “connecting the dots” on how financial contributions are affecting so much of what impacts our lives?

Groups working for social and economic justice have for the most part been getting their heads handed to them in the public policy arena, and the reason is the legal bribery in our political system today and the wealthfare system that is the direct byproduct. Corporations pour huge sums of money into elections. Workers and consumers don’t. Polluters are big political givers, conservationists and environmentalists aren’t. The insurance industry and the pharmaceutical companies and health care conglomerates are actively buying politicians. Your average patient isn’t. The big donors get rewarded. Everyone else pays. Some progressive groups get it, and a great many don’t. Or if they do, they sure don’t show it. They don’t act like they get it. They are terribly foolish not to. They are slitting their own throats.

Q.        What is the affect of Citizens United on Wisconsin’s state senate recall elections?

Ungodly sums of money will be spent in these races, and most of it by interest groups and party fronts, not by the candidates. The candidates will be limited in what they can raise for their campaigns, and they will have to disclose everything. The outside groups will be able to spend unlimited amounts, and the origins of most of that money will be kept secret. The candidates will be bystanders in their own elections. Outside interest groups will do almost all of the talking. This is the practical effect of Citizens United on elections.

Q.        Is there hope that more transparency can be built into campaign finance?

There is always hope. We have entered a new Gilded Age. The last time wealth and political power was concentrated in so few hands, it inspired a progressive movement that banned corporate campaign contributions and election spending, took politics out of the back rooms and gave power to the people through election reforms, all of which led to things like workers compensation, unemployment compensation and the progressive income tax. And set the stage for the New Deal, the creation of Social Security and so much more. What we are living through now will provoke a similar popular uprising. I don’t have a good enough crystal ball to know when, but once we sufficiently expose and ultimately criminalize today’s legal bribery and do away with the resulting wealthfare benefits, that’s when we will get single-payer health care reform. That’s when we will see a serious effort to break our addiction to fossil fuels, build a new green economy and arrest global climate change. That’s when promoting the common good will become less uncommon.

Q.        Can you talk a bit about the drive to amend the Constitution as it relates to corporations and money in financial campaigns?

Citizens United will not stand the test of time. The U.S. Supreme Court once ruled in the Dred Scott case that people can be property. In Citizens United the court ruled that property can be a person and that property has even greater free speech rights than living, breathing, flesh-and-blood persons. They effectively took the “r” out of free speech. They aim to make speech no longer a right but rather a privilege that has to be purchased at great expense. They will fail in the long run. Citizens United will one day go the way of Dred Scott. It will happen in one of two ways – either through an eventual change in the makeup of the Supreme Court, with the new majority overturning the Roberts court, or by constitutional amendment. Amending the constitution is devilishly difficult, as it should be. But it has been done 27 times before, and it can be done again. It certainly should be attempted in this case. Even if a 28th amendment cannot be won, the fight for it will hasten the day when Citizens United will join the Dred Scott ruling in the trash bin of American history. In the meantime, we not only need to push to amend the constitution but we also have to fight for legislative reforms that repair some of the damage done by Citizens United.

You can exercise all five rights granted to all of us by the First Amendment. Those rights are worth a thimble full of spit unless they are used. So you can speak up. Enemies of democracy are seeking to commercialize speech and make political participation prohibitively expensive for all but a few, making it more important than ever for us to be creative and find ways to make our voices heard. 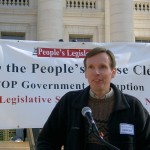 "We can take comfort and draw inspiration from our progressive heritage."

Maybe you can’t afford to buy television air time, but you can text and you can tweet and you can blog. At the same time, it’s important to remember the First Amendment doesn’t only guarantee the right to free speech. It guarantees freedom of the press. With newspapers dying and other traditional media increasingly falling under the control of a handful of plutocratic masters, it is essential that we create our own means of spreading the word and engaging each other in the conversation of democracy. The right to assemble and petition your government is guaranteed. You can do those things. We’ve seen a lot of that lately here in Wisconsin. Freedom of religion is guaranteed. You can worship as you see fit, or you can reject worship altogether. As the forces of theocracy assert themselves in our government, it is all the more important that we exercise freedom of religion, which includes fighting against any state establishment of religion.

More than anything, you can do what Cesar Chavez advised us all to do: Talk to one person. We’re all taught at a young age not to discuss two things in polite company – religion and politics. We need to talk politics with one another. That takes courage. But it is where real change begins.

Q.        How do you stay motivated and focused in what seems to be such a long, uphill fight?

I confess. I am a lifelong Chicago Cubs fan. I was born with the affliction. That’s where my undying optimism must come from. Seriously, it helps to remember that fighting for social justice is an ongoing battle. There are no ultimate victories or permanent defeats. It is a continuous struggle. Fighting Bob LaFollette said “democracy is a life.” It sure is. It is a living thing, and like all living things it will die without constant care and feeding. Here in Wisconsin it helps remembering that we don’t face anything that hasn’t been encountered and overcome before. We can take comfort and draw inspiration from our progressive heritage. We don’t have to make history. We only have to repeat it.

Q.        You’ve been working on a true progressive agenda for so long?  Do you sense that people’s views of what can be described as “people’s issues” have changed over the years?  If so, how?

Problems come and go, and issues appear to morph over time. But they don’t really change very much at all. At the root of them all are the same human failings. Selfishness. Greed. Fear. Hatred. These need to be replaced by a sense of common good and shared purpose. And an enlightened understanding of self interest that leads us to see that we are all in this together and inspires us to think we first instead of me first.

There are always forces of good and bad pushing against each other. What matters most is which side you are on, which way you are pushing. We are living through a new Gilded Age, and this moment in time will be remembered as a dark period in our political history. For the moment, the forces of evil may appear to have gained the upper hand. But current conditions are producing an awakening and will eventually usher in a new progressive era.