“Ultimately, we have a responsibility to stand up for human values and justice in every part of our lives”

The discussion of workers’ rights, the assault on organized labor, and the conversation of what it all means has never been a hotter topic as we approach Labor Day 2011. 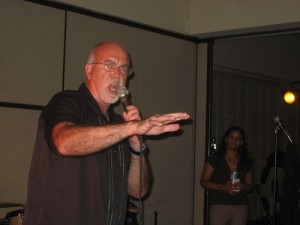 Wisconsin mesmerized us for months as union and non-union workers alike came together to galvanize a movement, a state, and a nation unlike anything we’d seen in years. Ohio voters – more than 1.3 million strong – signed petitions for a referendum on Senate Bill 5 that would strip collective bargaining rights from Ohioans. Even Indiana workers rallied to keep a union stripping bill from coming to the floor. But what does it all mean for labor, workers, and ultimately our democracy?

“When you look at labor today, we’re in trouble,” said Stewart Acuff, Chief of Staff and Assistant to the President of the Utility Workers Union of America in a recent interview at the Democracy Convention in Madison, Wisconsin. “We have this all-out assault against us by corporate power and by right wing state governments, but on the other hand, what I know having been an organizer for 35 years is that people will struggle for their dignity, their respect, and for justice. People who can be in the most unimaginable circumstances will still struggle for their dignity…and that’s what we have going on today, just like we have throughout all of history. At the end of the day, the willingness of average people to fight for their dignity and respect is what’s going to save the American Labor movement.”

Acuff is a veteran labor union organizer and strategist who can be found traveling the globe speaking, writing, blogging, and yes, even showing up on Fox News to discuss labor and workers’ issues.  He started union organizing in 1982 as the Service Employees International Union coordinator in Texas where he and his team organized 12 nursing homes in two years. In 1985, he went to Georgia, where he founded SEIU Local 1985 and built the union up to 3,000 members. In 1990, he became president of the Atlanta AFL-CIO where he organized and led the historic campaign to unionize the 1996 Olympics, labor’s biggest victory ever in the South. In 2000, he went to work for the national AFL-CIO, where he served as organizing director from 2001-08. His recent books include Getting America Back to Work, which he co-authored with economist Richard Levins and the soon-to-be released Playing Bigger Than You Are, a reflection on his 35 years of organizing.

“I know that as bad as it may seem today, and it may get worse, there will be a time when good people, average people, unite and turn it around,” Acuff says. “That’s what’s happened in the course of human history and American history. Every generation has struggled to make this species more fair, more free, more just and history is riddled with two steps forward and one step back.

“We don’t get to choose what epoch we are born into.  The only thing we can do is to choose where we take our place in the historical context and whether we fight for rights of people, freedom and democracy or whether we sit it out on the sidelines.  That’s the fundamental choice.

“The struggle right now is to save our democracy from this monumental transfer of wealth from the poor and middle class so that now the one percent of the financial elite at the top of our society has more money than they ever had. It’s gone from a crisis of the working class to a crisis of the middle class to a crisis for our democracy. We face an unemployment rate that is really closer to 20 percent; we have a politicization of our country’s ability to pay its debt; and we have a political party that has been totally captured by the radical right wing, which consists of an ugly amalgam of the financial elite, know-nothing right wing populists and right-wing political forces.”

Acuff puts the recent Citizens United U.S. Supreme Court decision squarely at the center of the current crisis. He called the decision an affront to our intelligence and a rebuke of our nation’s founding fathers. His biggest fears focus on democracy for sale and that democracy on the auction block bought by the Koch Brothers, Karl Rove or Grover Norquist is neither freedom, nor democracy.

But Acuff is not one to become discouraged easily.  He stresses a two-fold strategy as 2012 approaches: a strategy of action and a focused, explicit strategy. “All of us have to act and no action is too small. First, it requires us to involve ourselves in organizations that stand for the values of fundamental human rights, whether that is a community organization, an environmental organization or certainly a labor organization. Whatever it is that allows for common action is critical.  Second is to communicate in every way possible. I mean responding to blogs, writing a letter to the editor. We need to be communicating values. This is less a right/left issue than it is a human rights issue. All of us have a responsibility to engage in that…Ultimately we have a responsibility to stand up for human values and justice in every part of our lives.”

The explicit strategy, Acuff points out, is more of a political strategy, which he says differs locally and nationally. “For example, in Wisconsin we fought to get control of the state senate. We fell one race short, but look at the incredible movement that developed in Wisconsin. I’m convinced we’ll win the ballot initiative on SB 5 in Ohio and I was on Fox News three times in one week to talk about organized labor putting together a SuperPac to compete with corporations. All of these are real and serious strategic initiatives.

“Workers are still fighting to organize,” Acuff said.  He specifically called out the work of the Farm Labor Organizing Committee (http://supportfloc.org/default.aspx) in North Carolina and the Coalition of Immokalee Workers (http://ciw-online.org/index.html) in South Florida).  “The reality is those elements of our society that are most likely to be progressive are growing and right wing elements are declining.  That’s just a demographic fact.  Which is why Democrats have to struggle to think not just about the next election, but about teaching and staying true to their principles.”