He spoke for the disaffected, the impoverished, and the excluded

One of my true heroes was born today (November 20, 1925).  Although far from perfect – like all of us – his genuine compassion for people and his belief that government could make a positive difference is people’s lives has never been duplicated since his tragic death on June 6, 1968.

Bobby Kennedy offered hope to a divided country in 1968 that the progressive spirit would once again resurrect in full force.  For those of us who lived through the assassination of John F. Kennedy – that anniversary just two days from now – it was Bobby’s run for president during a time of war that made the prospect for peace and justice a possibility.  During a time of division, he suggested a way for healing. 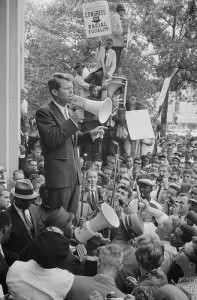 His fervor for Civil Rights, and his commitment to racial equality, was rooted in a firm sense of social justice.  As Senator, Kennedy visited apartheid-ruled South Africa and at the University of Cape Town he delivered the Annual Day of Affirmation speech. A quote from this address appears on his memorial at Arlington National Cemetery.

“Each time a man stands up for an ideal, or acts to improve the lot of others, or strikes out against injustice, he sends forth a tiny ripple of hope.”

He spoke forcefully in favor of what he called the “disaffected, the impoverished, and the excluded.”  Where were those topics in this past presidential election?

For those of us old enough to remember the 1960s, November can be a tough month – with the birthdate of Robert Kennedy and the anniversary of the date that was a defining moment for a generation/era (November 22, 1963).  For all their imperfections, the Kennedys reminded us that we could think outside of our self-interests and that traveling the road of possibilities for good was the far better road to be on.  Both are featured in our book Wisdom of Progressive Voices.

In honor of Bobby’s birthday, here are a few of his great quotes.

“As our nation—and its problems – have grown, we seem to have grown apart from one another.  We seem, through no fault of our own, to look only the short distance; to turn away from the far horizon; to work, each of us, on building a piece of our country.  And the pieces do not match…We became separated from one another, treating those of different races, or religions, or calling, as adversaries instead of allies…the first step in this task is to remember what our government should be…a reflection of common effort, a means of aspiring greater individual opportunity to our citizens.”

“I have seen the people of the black ghetto, listening to ever-greater promises of equality and justice, as they sit in the same decaying schools and huddle in the same filthy rooms, without heat, warding off the cold and warding off the rats.  If we believe that we, as Americans, are bound together by a common concern for each other, then an urgent national priority is upon us.  We must begin to end the disgrace of the other America.”

This entry was posted in Peace, Social Justice and tagged Bobby Kennedy. Bookmark the permalink.