It Didn’t Used To Be Like This: A look back to when a U.S. Senator campaigned on $200 total

Perhaps it was reading Wisconsin-native Mike McCabe’s great new book Blue Jeans In High Places (a look at the failure of our current two-party system and what needs to be done to change it) or maybe it was the constant sinking feeling in the pit of my stomach as I read story after story about the literally millions and millions of dollars pouring into races for everything from U.S. Senate to local school boards. But, I keep finding myself saying over and over, “It didn’t used to be like this.” And the thing we tend to forget in our 24-hour news cycles, and instant living pace of today is that indeed — it wasn’t that long ago when the insanity released by the U.S. Supreme Court’s disastrous Citizens United decision was not the norm. 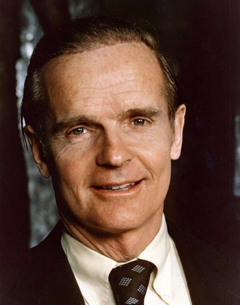 Senator Bill Proxmire: One of the basic tenets of the progressive faith is that political leaders have a primary obligation to inform their constituents. This springs from the progressive doctrine that the people are sovereign.
–Pictures courtesy of Wisconsin Historical Society

Remember U.S. Senator William Proxmire? He was the Wisconsin Democrat who served for 32 years and often spent less than $200 on his campaigns, with some of the money used to buy stamps to return donations sent by constituents. Throughout his career, he wore inexpensive suits, and paid for his own plane trips. That’s how we used to run campaigns. Many a time my father would report seeing the Senator at the factory gates of A.O. Smith Corporation in Milwaukee, where my dad worked. The Senator was there to greet workers at 7 a.m. with the changing of the shifts.

So in November 2014, when dark money, billionaires, and non-stop TV and radio ads are the norm, we thought it would be an appropriate time to take a look back on this great Wisconsin Senator, who once said: “I think fully two-thirds of the senators could get re-elected without spending a penny.” Between 1958 and 1982, Proxmire consistently won re-election by wide margins despite refusing to spend large sums on his campaigns.

It may be hard for some to realize that Wisconsin used to be known as a state that produced progressive Democrats with roots that went back to Robert “Fighting Bob” La Follette. But they did; and Proxmire was no exception. A native of Illinois, educated at Yale and Harvard, Proxmire said La Follette was his idol. Proxmire moved to Wisconsin to be a reporter for The Capital Times in Madison in the early 1950s. According to Proxmire, “They fired me after I’d been there seven months, for labor activities and impertinence.” Proxmire failed in his attempts to become governor of Wisconsin in 1952, 1954 and 1956, but he was elected to the Senate in a special election in1957 to fill the vacancy after the death of Wisconsin’s other famous son, Republican Joseph R. McCarthy. Re-elected in 1958, Proxmire went on to overwhelming victories in 1964, 1970, 1976, and 1982.

Proxmire was a strong supporter of Civil Rights. In his first term he clashed with the Senate majority leader, Lyndon B. Johnson, because Proxmire thought Johnson was blocking civil rights legislation While in Congress, Proxmire championed human rights, consumer rights, and honest government while opposing federal waste and corruption. For more than 20 years Proxmire never missed a roll call vote.

“He was 100 percent always on the side of the little guy,” recalled former colleague Rep. David Obey (D-WI) on the death of Proxmire on December 15, 2005. “He hated government waste, and he hated abuse of power.”

Proxmire chaired the Senate Banking, Housing and Urban Affairs Committee, and the Joint Economic Committee. He also served as subcommittee chair on the Senate Appropriations Committee. Besides banking, Proxmire also worked tirelessly on the Federal Communications Commission’s Fairness Doctrine, ratification of the international Genocide Treaty, supporting Great Lakes shipping and Wisconsin agriculture, and opposing the Supersonic Transport plane (SST), the B-1 bomber and other military spending he considered unnecessary.

Proxmire refused many perks and privileges of his position, such as reimbursement for travel expenses or limousine service. Over the years he returned more than $900,000 from his Senate office allowances to the U.S. Treasury. During his last two campaigns for re-election he refused campaign contributions.

In 1975, Proxmire began awarding a Golden Fleece each month as an example of government excess. Recipients included the Commerce Department for a $28,000 study of the best surfing beaches in Honolulu, and the Economic Development Administration for spending $20,000 to build a replica of the Great Wall of China in Indiana.

Called the “legislator’s legislator” by Ralph Nader, Proxmire, in Nader’s words, was the go-to Senator against big corporate welfare proposals, such as the federal bailout of Lockheed, as well as being against corporate tax loopholes, and for measures to protect consumers financially with legislation such as the truth-in-lending law.

Proxmire often spent no more than $200 total for his re-election campaigns — as recently as 1982.

Upon Proxmire’s death, Nader wrote: “Senator Proxmire was good for consumer protection, the environment, worker safety, small farmers, fair taxation and efficient government. At times he would rebuff labor unions and women’s rights groups because of honest disagreements with them. He could be that because he believed that the folks back home were his “bosses,” as he called them…”

Former Wisconsin Democratic Governor Tony Earl remembered Proxmire (upon his death) this way: “He made the case that personal contact and keeping in touch with the voters was a lot more important than how much money you had. We could sure use a lot more of the frugality today.”

Perhaps a foreshadowing of what we now experience in the unfettered world of money in politics after Citizens United, came back in 1957 when Proxmire penned the following (as newspapers were the campaign vehicle of their day):

“The current Republican (Senatorial) primary contest is a perfect example of the dire need for Wisconsin election spending laws to stop the buying of elections…Present Wisconsin laws limit the amount that a candidate and his can spend in an election for the U. S Senate to $10,000. Yet one Republican candidate has publicly stated that he and his supporters are spending $14,000 every week of the primary. The two leading Republican candidates have received the support of business committees that are driving for spending goals far in excess of $10,000. This is all legal because Wisconsin law sets no limit on voluntary committee spending.

“Money has become a more potent force than ever in winning elections. The expensive mass media offer the quick, easy, magic way to every voter. No political figure in Wisconsin today can draw a crowd of more than a few hundred to hear a personal address, and any candidate with the money can command a guaranteed audience of several hundred thousand on television any time he puts up the money.

“Big money can reach every home with direct mail, huge newspaper ads, a constant stream of radio plugs, until the big money candidate has become securely identified, with the voter in just the way big money desires it. This campaign by checkbook is sure to hurt the Wisconsin farmer, worker, small businessman— all Wisconsin citizens, in fact, except the well-heeled few seeking a special interest.

“The remedy is clear: A reasonable limit on all campaign spending and enforcement by making the candidates responsible for money spent in his behalf and by penalties against violating contributors as well as candidates and wide publicity for all campaign contributions in advance of the election. And full identification of contributors including the interests they represent.””

And for those dismayed by the current state of politics after the 2014 mid-terms, it may be good to remember what Proxmire wrote after the 1958 elections:

“From what I have heard in countless conversations with the people of Wisconsin—at the factory gates, on the street corners, across the store counters, in farm yards, and in meeting halls, I am convinced that the progressive spirit has truly awakened in my state. The people are deeply troubled by the depressing drift and lagging impetus of the American economy. They are disturbed by the deterioration of integrity and morale in public service. They are frightened by the loss of our supremacy to the Soviet Union in scientific advances and weapons technology. They are angered by the Administration’s lackadaisical response to these problems. All of these factors—and I am confident that they are causing widespread concern throughout our land—have led to a deep- rooted resurgence of progressivism. One of the basic tenets of the progressive faith is that political leaders have a primary obligation to inform their constituents. This springs from the progressive doctrine that the people are sovereign.

“Another fundamental of progressive doctrine is a belief in social justice. Though the term goes back to the turn of the century, it still fits today’s concern for civil rights, individual liberties, and economic justice. Democracy to progressives means not merely the absence of political tyranny, but a positive exercise of the will of the people over the whole range of the problems that confront them as citizens— economic and social, as well as political. Out of this conception, of the people as sovereign and of government as the instrument of the people, arises what is often called the “Wisconsin Idea.” It is an ideal of public service through the agency of government. It demands the highest standards of integrity. It commands aggressive championship of the people’s interests against conflicting private interests. It accepts as the obligation of government a duty to attack social problems, to promote the general welfare, and to do for the people those things that they cannot do so well, or at all, by themselves.

“Wisconsin state government, under a series of stand-pat Republican governors, has frittered away its financial reserves while schools, welfare institutions, highways, and other public programs have gone steadily down hill. And all this while the burden of taxes upon homeowners and farmers has steadily increased. The people of Wisconsin are now turning to the progressive, alert, and capable young leaders of the Wisconsin Democratic Party for solutions to long-neglected problems. I am confident that very much the same thing is happening throughout other areas of the Midwest that have for so long been considered ‘solid Republican.’”

To read more about this great Senator, check out the Wisconsin Historical Society page by clicking here. To check out a great C-Span interview with Proxmire, click here. To hear the Senator in his words check out the video below.