John Dear: My vision of nonviolence comes from seeing every human being as our sister and brother

Sit with the word for just a moment and ask yourself what does it mean to you?  Have you ever taken a moment to stop and think what nonviolence would look like in your own life, in the life of your local community or as a citizen of the world?

For John Dear, S.J., the word nonviolence is at the heart of his work and his life.  Dear, nominated in 2008 by Archbishop Desmond Tutu for the Nobel Peace Prize, is an internationally known voice for nonviolence and peace. A Jesuit priest, pastor, peacemaker, organizer, lecturer, and retreat leader, he is the author/editor of 28 books, including his autobiography, A Persistent Peace and his most recent Lazarus Come Forth (see sidebar).  He also writes a regular column for the National Catholic Reporter.
For Dear, nonviolence is not a mere thought but a way of life that has washed over him for more than 30 years.  The best way to appreciate the breadth and depth of his writings and his lifelong journey on the path of nonviolence is via a trip to his web site.

“I’ve seriously studied Martin Luther King, Jr. and Mahatma Gandhi for 30 years,” Dear said in a recent interview with Wisdom Voices.  “Both of them talked about nonviolence morning, noon and night.  They didn’t talk as much about ‘love,’ ‘truth’ or ‘peace’ because they said that our language has failed.  Many people speak of peace, for example, as if it means you can still be for war and nuclear weapons. So they used a whole new word ‘ahimsa’ (a Hindu word that means nonviolence).

“They saw nonviolence as a whole new way of life.  And it begins with the boundary line that there is no violence.  You don’t kill people.  You don’t support the killing of people and you don’t harm people and prepare to nuke people.  It’s about the force of love that seeks the truth of our common humanity that allows God to disarm our hearts and that reconciles with everyone.  It actively resists all destruction and violence with this one bottom line:  There is no cause, no matter how noble, no matter what anyone says, for which we will support the taking of a single human life.

“My thinking of nonviolence after 30 years is that it’s a spirituality not just a methodology. It comes from a vision that sees every human being as your sister and brother. That’s the key to the whole thing. That we’re all one and we are already reconciled. Once we enter the truth of our common unity, then we realize we can never hurt anyone again or be silent when 30 wars are raging, people are starving, nuclear weapons are poised to strike or global warming is threatening our sisters and brothers.

“Nonviolence is an active way of life.  You’re giving your whole life in universal love for the whole human family.  And it’s very, very tough.  And nonviolence is a better word than love or peace because it means you have to be nonviolent to yourself, nonviolent in all of your relationships and you have to be part of the global movement of nonviolence to disarm the world.  Along the way we learn that nonviolence is more powerful than violence.  It works because it’s the work of God, as Gandhi said.”

Dear’s daily dedication to the mission of nonviolence is beyond question.  His work has taken him literally around the world as he has demonstrated for and spoken about nonviolence and peace to more than a million people.

Dear has taken his mission to El Salvador, where he lived and worked in a refugee camp in 1985; to Guatemala, Nicaragua, Haiti, the Middle East, Colombia, and the Philippines; to Northern Ireland where he lived and worked at a human rights center for a year; and to Iraq, where he led a delegation of Nobel Peace Prize winners to witness the effects of the deadly sanctions on Iraqi children. He has run a shelter for the homeless in Washington, DC; taught theology at Fordham University; and served as Executive Director of the Sacred Heart Center, a community center for disenfranchised women and children in Richmond, Virginia.

The more than 30 years of preaching, writing, and activism for nonviolence has led to more than 75 arrests and more than a year in jail.  He has been mocked by the New Mexico National Guard, who harassed him outside his parish home and he has withstood the wrath of audiences and parish members who have disagreed with his anti-Iraq war stance. 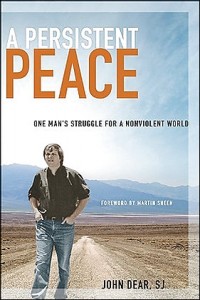 A Persistent Peace: One man's journey to lead us toward nonviolence and peace

“You can’t live and practice nonviolence and at the same time seek success or results or try to be effective.  On the one hand, you give your entire life to it and on the other, you have to let go of it.  There is a very old Hindu/Buddhist/Christian teaching that talks about the detachment of results.  It says you do the good because it is good; you seek what is right because it is right.  It is very difficult work because ultimately we’re talking about the abolition of war.  Yet, there have been a lot of amazing victories in the last 30 years.”

His Christmas Eve message citing the end of the war in Iraq highlights a list of other recent world-wide activities aimed at peace.  Not to be forgotten, he also notes are:  the end of the Vietnam war; the fall of the Berlin Wall; the end of apartheid in South Africa and the election of Nelson Mandela; the people power movement in The Philippines; and the three Liberian women whose never-ending activism to end the war in their country earned them the 2011 Nobel Peace Prize.

“Those women showed post-doctorate Ghandism,” Dear said. In his book Lazarus Come Forth, he writes about the three:

“…in doing the unimaginable, they have so much to teach us.  About faith and nonviolence, prayer and struggle.  About giving our lives for justice and disarmament.  About vision and imagination.  About changing the world.  In sum, about raising the dead and leading them into their new lives of freedom and peace.”

“You could make the case that over two-thirds of the human race is involved in nonviolent movements in the last 30 years.  I think about that every day.  We just don’t see it in the U.S. because we are in the belly of the beast.  We are the empire.

“That’s what Dr. King called for: Accepted suffering, love in pursuit of truth becomes redemptive and transformative and can lead to breakthroughs that couldn’t happen otherwise.”

This “radical” message of peace and nonviolence is often met by hostility at many of the venues in which Dear speaks.  Say the word “peace” to people and it can make them “fighting mad.”

“I think very, very, very few people are interested or committed to nonviolence,” Dear said.  “Everybody is for peace, I always joke, but deep down, there’s always someone we want to get.  Everybody’s for killing Osama bin Laden or Gaddafi or Saddam Hussein.  When I talk, I usually face hostility.  Even when I speak to peace groups, I face hostility because they want to know why I’m bringing up the religious/spiritual aspect of all of this.”

Dear was in New York City, and even scheduled to have breakfast at the World Trade Center, on September 11, 2001 before plans changed.  Later, he ministered side-by-side with others to families of victims of 9/11. Yet nothing has swayed his belief that there is no room for revenge or a “just war.” His descriptions in A Persistent Peace of speaking out against the war in Iraq to many audiences clearly articulate the struggle and lonely road that awaits one who preaches nonviolence to a culture enmeshed in military patriotism.  His description of the anger and hostility he faced at one evangelical Christian college in Pennsylvania on the eve of George W. Bush’s re-election in 2004 is especially poignant.

Hundreds walked out, and the rest of the crowd started to chant, “Bush…Bush…Bush” and Dear ended his speech. “There was incredible hostility,” he said. “I never saw so much hatred. But those students had never heard that argument in their lives. They were so brainwashed that they did not know that Jesus was nonviolent and that Christians are likewise supposed to be nonviolent. That speech affected the whole school and it may have changed lives. But change doesn’t often happen the way you think. Look at what happened to Jesus. He was killed, but his life has changed the world.”

So how does the life of nonviolence intersect with today’s political world?  “I don’t have any particular solutions for what any individual should do,” Dear said.  “But you have to try to do something public and active through your nonviolence.  Everyone has to wrestle with that question – “What should I do?”  I think everyone has to have one foot in the global movement for peace and justice.  I think all issues are connected.  I like to think that every one of us is Rosa Parks.  I always quote Archbishop (Oscar) Romero (archbishop of San Salvador, El Salvador assassinated in March 1980) who said literally minutes before he was shot:  ‘Nobody can do everything, but everybody can do something.’

“That’s my motto. Everyone has to pick a cause and do something to help improve the world. I think the political system in this country is completely broken. We’ve become a full-fledged empire. We have 750 military bases around the planet. We need to push for the ideal of a nonviolent democracy with a nonviolent culture in which everyone has enough food, a house, a job, healthcare and education. And we need to demand this for everyone on the planet. That was the goal that Martin Luther King spoke of and what all great religions teach. So that’s why everybody has to be a part of the growing global movement of nonviolence. This is what wisdom and the spiritual life demand.”

To hear John Dear in his own words: