November provides us the perfect month to pause and reflect on the life of Jose Hobday, who spent most of her days providing wisdom and spiritual guidance on how to life and enjoy a simple life.  As the Occupy Wall Street movement continues to focus on the greed that permeates our culture and shines a light on the divided economic reality in our country, it’s good to remember the life and words of this Native American spiritual teacher who enjoyed life to its fullest by living simply and loving largely. 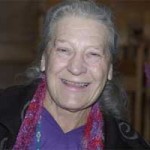 "Simplicity requires that we decide what we want to accentuate in life," said Jose Hobday.

Hobday, a Franciscan nun, used her Native American insights about love of the earth, family, community and the simple life to inspire others to live a more authentic life of prayer, simplicity, poverty, peace and wonder. Dorothy Day, Cesar Chavez, Henri Nouwen, and Mother Teresa were her contemporaries.

Born January 4, 1929 in Santa Anna, Texas, to a Seneca-Iroquois mother and a Southern Baptist father, Hobday became a full time lecturer and for decades gave workshops across the country on prayer and spirituality. She used her Native American roots and its tradition of storytelling to inspire and teach.  She traveled as many as 150,000 miles a year and her wit and wisdom dazzled audiences worldwide, whether she spoke to small retreat groups or to the United Nations.  She once sent a Valentine’s Day card to the Vatican and received a reply from Pope John XXIII:  “Thank you for the Valentine.  First one I ever received,” the pope said.

Hobday was once described as “one of the greatest teachers of downward mobility.”  She embraced voluntary simplicity and exemplified selfless service and a profound respect for all religions and cultures. In her classic book, Simple Living, José writes that to achieve free-wheeling love, compassion and joy, we have to let go of power and control. Downward mobility and voluntary poverty, she said, “not only remind us of our need for God, but counter the current reliance on corporations, fueled by greed, Wall Street values, and first-world consumerism.”  In a passage from her book, she said:

One of her favorite stories, which she told most audiences, was that although she lived out of a suitcase three out of four weeks each month, a simple lifestyle allowed her the freedom to travel lightly. “Two dresses and a sewing kit” are far better than a satchel full of clothes, she always said.

She understood and lived within the hierarchical, male-dominated Catholic Church, but she was a staunch supporter of ordination of women and once proclaimed:

“I say to the bishops, ‘You still don’t know that God is a woman?’ If I don’t see girls on the altar I complain. My mother said that institutions move a hundred times more slowly than the people do, so I stick with the people.”

Hobday held degrees in theology, English literature, architecture and space engineering, but considered herself a “student of life” and took her ministry to the poorest diocese in the United States.  She was a member of the Blessed Kateri Tekakwita Native American Parish in Tucson, Arizona, when she died on April 5, 2009.

A remembrance of her life is nicely summarized by John Dear, S. J.