July 4, 2015: We Are Once Again Called To Reclaim Our Democracy

For the history lovers among us, the July 1 appearance by 2016 Democratic presidential candidate Bernie Sanders in Madison, Wisconsin, before 10,000+ at the Aliant Energy Center awakened the comparison of Sanders to Wisconsin native son and Progressive Party presidential (1924) candidate Robert M. (Fighting Bob) La Follette. 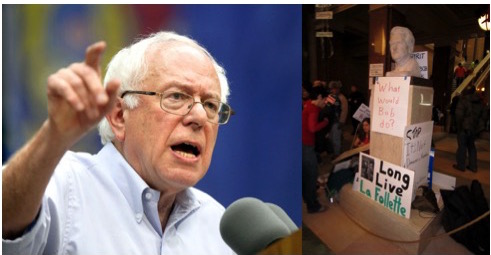 There is no denying that Bernie Sanders is the 21st century “Fighting Bob.” Somewhere Robert La Follette is begging us to listen.

La Follette, considered the father of the American Progressive movement, founded The Progressive magazine and spent his entire life battling corruption and big money in government. The links to what is now described as the 21st century Gilded Age can be traced back to identical conditions a century ago. Perhaps had we not dropped civics and state history from our public schools, Wisconsin (and other states) would never have fallen for the twisted gobbledygook peddled by snake oil salesmen and current Wisconsin Governor Scott Walker, proudly owned and operated by the billionaire Koch Brothers.

La Follette, one of 23 featured in our book Wisdom of Progressive Voices, ran in 1924 on a platform that called for government ownership of the railroads and electric utilities, cheap credit for farmers, the outlawing of child labor, stronger laws to help labor unions, more protection of civil liberties, and a referendum before any president could again lead the nation into war. 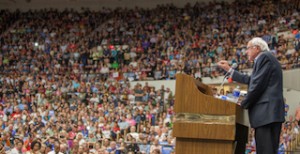 Bernie Sanders runs on a 12-point program that includes transforming our energy system from fossil fuels to sustainable energy, providing equal pay for women, breaking up the big banks, and providing a Medicare For All single payer health system that guarantees Americans join the rest of the educated world in providing health care as a human right.

If you missed the incredible Bernie speech in Madison on July 1, we invite you to click here. Bernie starts at approximately the 50-minute mark.

Then we invite you to read below an excerpt from a speech given by Fighting Bob on July 4, 1897 on the “Dangers Threatening Representative Government” considered by some to be one of the greatest speeches in American history.

July 4, 2015 and we stand on the brink of losing our representative democracy again. Bernie Sanders is calling us to fight back and not let that happen. A great Jesuit once asked, “Where do we think it is that our dead have gone? Do we think they are just buried in the ground? Or do we think that their spirit resurrects for us?” 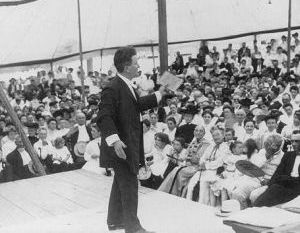 Listen and read. The prophetic voice of Fighting Bob begs us again — via Bernie Sanders—to connect the dots and understand what’s at stake. There’s no better day to reflect on that than on July 4th.

“The basic principal of this government is the will of the people. A system was devised by its founders which seemed to insure the means of ascertaining that will and of enacting it into legislation and supporting it through the administration of the law. This was to be accomplished by electing men to make, and men to execute the laws, who, would represent in the laws so made and executed the will of the people. This was the establishment of a representative government, where every man had equal voice, equal rights, and equal responsibilities. Have we such a government today? Or is this country fast coming to be dominated by forces that threaten the true principle of representative government? Since the birth of the Republic, indeed almost within the last generation, a new and powerful factor has taken its place in our business, financial and political world and is there exercising a tremendous influence.

“The existence of the corporation, as we have it with us today, was never dreamed of by the fathers…The corporation of today has invaded every department of business, and its powerful but invisible hand is felt in almost all activities of life . . . The effect of this change upon the American people is radical and rapid. The individual is fast disappearing as a business factor and in his stead is this new device, the modern corporation . . . The influence of this change upon character cannot be overestimated.

“These corporations and masters of manipulation in finance heaping up great fortunes by a system of legalized extortion, and then exacting from the contributors, — to whom a little means so much – a double share to guard the treasure! . . . So multifarious have become corporate affairs, so many concessions and privileges have been accorded them by legislation, – so many more are sought by further legislation, — that their specially retained representatives are either elected to office, directly in their interests, or maintained in a perpetual lobby to serve them. Hence it is that the corporation does not limit its operations to the legitimate conduct of its business.

“Oh, men! Think of the heroes who died to make this country free; think of their sons who died to keep it undivided upon the map of the world. Shall we, their children, basely surrender our birthright and say: ‘Representative government is a failure? No, never, until Bunker Hill and Little Round Top, sink into the very earth.’ Let us here, today, under this flag we all love, hallowed by the memory of all that has been sacrificed for it and for us, dedicate ourselves to winning back the independence of this country, to emancipating this generation and throwing off from the neck of the freemen of America, the yoke of the political machine.”

You may also enjoy this vintage clip of Fighting Bob as he “mass communicated” in his day. Remember “talkies” had not yet come to Hollywood in 1924.