Like many, I have spent some time reflecting on Labor Day and what it has meant to me and my family over the year and how the state of labor in this country has changed over the course of my life time.

I recently uncovered both my father’s union cards – one from the International Association of Machinists and Aerospace Workers and the other from the Milwaukee Teachers Union.  I remember the wonderful middle class life he was able to provide for us and how he paid of his 20-year mortgage ahead of schedule.  He wasn’t particularly frugal, but the wages and benefits he earned from both jobs allowed him to provide food, clothing and shelter for his family while my mother stayed at home to raise three children. How and why we lost sight of all of this and why labor unions have been so eviscerated, I’m still not sure.

Labor unions, like any institution, are neither perfect nor all bad.  However, there can be little doubt that labor unions improved the lot of workers and working families throughout the 20th century.  To ignore that fact disrespects the thousands who fought so hard for what we take for granted today:  child labor laws, the 40 hour work week, paid vacation, and other basics that could be summed up with the words “dignity for the worker.” 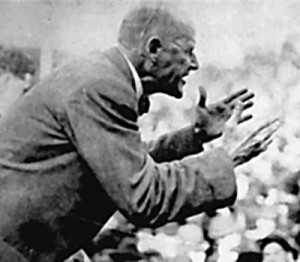 Learning more about Eugene V. Debs was one of the things I most enjoyed in writing my book:  Wisdom of Progressive Voices.  His unwavering commitment to the American worker, and his incredible hard-fought battles in struggles with the corporate powers of his time make him one of the strongest and most articulate advocates for workers’ rights that ever lived.  Here is one of my favorite quotes from him:

“I am opposing a social order in which it is possible for one man who does absolutely nothing that is useful to amass a fortune of hundreds of millions of dollars, while millions of men and women who work all the days of their lives secure barely enough for a wretched existence.”

And to think, he never heard of the word derivatives when he said that.

I urge everyone to take a moment on this Labor Day to take a quick refresher course on the American Labor Movement and its storied history so as to remember the plight of the working class before the toil and sweat of those who fought to create labor unions and a better working world for us today.

One of my favorite articles that I read on this topic was from (of all places) the Diocese of Madison Catholic Herald:  http://www.madisoncatholicherald.org/eyeonthecapitol/2471-huebscher.html

A good reminder for religious leaders of all faiths on the important tie between the teachings of Jesus of Nazareth and working people.  Or as Eugene Debs would say:

“Jesus was the grandest and loftiest of human souls…He had the majesty and poise of a god, the prophetic vision of a seer, the great, loving heart of a woman, and the unaffected innocence and simplicity of a child. This was and is the martyred Christ of the working class, the inspired evangel of the downtrodden masses, the world’s supreme revolutionary leader, whose love for the poor and the children of the poor hallowed all the days of his consecrated life, lighted up and made forever holy the dark tragedy of his death, and gave to the ages his divine inspiration and his deathless name.”