“Some people see things as they are and say why? I dream things that never were and say, why not?”

Fifty years ago (July 30, 1965), Medicare helped lift a generation of seniors out of poverty, and it continues as this nation’s gold standard in providing health care through a single-payer model. In 1965 before Medicare was passed, nearly half of the elderly in the United States lacked health insurance coverage. Today, more than 50 million Americans go to bed each night knowing medical care will be there if needed.

With low administrative expenses, all-inclusive philosophy and unrestricted choice of providers, Medicare is the most popular medical insurance system in the nation – and the most efficient.

There are celebrations all over the country this Thursday to mark this historic date. Click here to find out more about Medicare and an event near you. It is indeed a reason to celebrate. There have also been reams of articles written on this anniversary, one of the best coming from Robert Reich. Click here to read his account on how Medicare is not the problem, but the solution to our on-going health care delivery problems.

However, as we celebrate, it is also a time to reflect on just how far short this country falls in providing health care as a human right to its citizens — both in its government-run Medicare program as well as the Republican Heritage Foundation idea now known as the Affordable Care Act. Health care reform activist Wendell Potter provides a fabulous history lesson on the struggle to enact Medicare legislation and his caution about the perils at hand now that private health insurers have taken a stronger hold even in Medicare via the “Medicare Advantage” portion of the law. Click here to read his account.

Ah, yes, Medicare Advantage — a chance for the “for profit” insurance companies to make a buck off of the government. You know — Stephen Hemsley (UnitedHealth Group CEO) and his friends who mooch off the government and taxpayers on their way to making millions of dollars in profits. We agree totally with Mr. Potter’s assessment that before we can bring about a “Medicare For All” single payer system in this country, we need first to get the “for profit” insurers out of the Medicare business altogether.

Have you read about the recent mega merger between Anthem and Cigna? Wonder why it’s happening now? Mr. Potter offers an easy explanation: “One of the reasons the insurance industry is now going through another wave of consolidation – Aetna is proposing to pay $37 billion for Humana and Anthem has bid $48 billion for Cigna – is the desire by the acquiring companies to boost their presence in Medicare Advantage. If regulators approve the deals, UnitedHealthcare, Aetna and Anthem will have a collective market share of almost 50 percent.”

There really are great big health care dots that are easy to connect.

And while we celebrate Medicare turning 50, let’s not forget there are millions of people under the age of 65 struggling to access affordable health care. Make no mistake; the Heritage Foundation’s ACA idea did lower the uninsured rate in this country. That’s the good news. The bad news: For many who now have a health insurance card, the reality is, they can’t use it. The other way Stephen Hemsley and his cohorts make millions of dollars of profit? They have crafted a product they overprice and they know people will not be able to use. Ah, Yankee ingenuity at its best?

Check out a recent Star-Tribune article in the home city of UnitedHealth’s Hemsley that again documents how for-profit insurance companies sell people a product they can’t use because of high deductibles and copays. From the article: “In the past year, Minnesota’s main hospital and clinic groups filed nearly 9,000 lawsuits against people with large or long-standing medical debts — a sharp increase since 2005, according to a Star Tribune analysis of court records.

“Once a leading cause of personal bankruptcy in the United States, medical debt was widely expected to decline as more Americans got health insurance following federal health reform. Instead, shifts in the insurance market are pushing more people toward high-deductible policies that can require them to pay as much as $7,500 before any insurance benefits kick in.

Why do we remain so willfully ignorant about how health care is delivered in this country? A question I’ve never been able to answer. 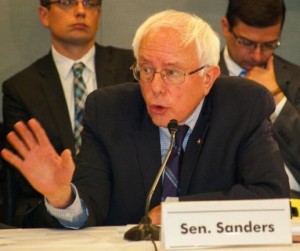 Bernie Sanders: A forceful voice for “Medicare For All” single payer.

As the Medicare celebrations end this week, many will continue on with the struggle to bring health care as a human right to people of this country. There are organizations and individual legislators who won’t stop until we adopt a single payer health care system. When you hear a politician such as Jeb Bush talk about “phasing out” Medicare, remember he’s doing the bidding of the billionaires such as Stephen Hemsley who continue to profit over the misery and suffering of millions. And you should also remember that there are presidential candidates such as Bernie Sanders who continue to speak loudly and forcibly about the need to create a “Medicare For All” single payer health care system in this country.

Through which set of ears will you process the future of health care in this country?