The panel energized the gathering by elaborating on the simple theme of this tour:  Make America work for those who work for a living.

Rep. Grijalva talked about changing the conversation of the last 12 years which “has been about dividing America.”  He said that the division has been “driven by factors that have nothing to with traditional American values” and that “the consequences of that division are that our priorities have been warped.”  He talked about returning balance to the discussion and working for the “common good for the greater good.”  And most importantly, returning the American dream to what it had been for years.  “We need to put the dream back…that my kids will have a better life than what I had…that dream has been shattered by failed policies.”

Ellison acknowledged that the Republican controlled House of Representatives has no intention of promoting legislation for a jobs bill.  “We have the bills,” he said.  “We don’t need any more bills.  What we don’t have now is the big push to make the Republicans do anything with the bills.”  That, Ellison noted, was the main force behind the tour – to build the energy generated from each stop along the tour into action that leads to good American jobs with wages and benefits. “Why don’t we believe we can create the fastest high speed rail in the world and make that a reality?” Ellison asked. 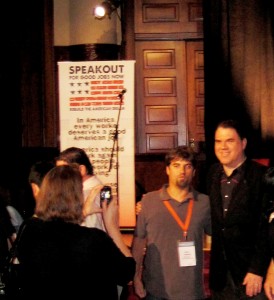 But it was Grayson who spoke with his usual passion and flair that sparked the crowd.  He listed the five things necessary to be part of the middle class:

A key component of the tour is the commitment to “listen” to what Americans have to say.  The handout for those who attend includes all the ways citizens are urged to “Get Congress On Track to Rebuild the American Dream”.  Information on how to text, write, call, or share a story is provided.  And the tour provides a microphone to anyone in attendance who wants to share a personal story.  Those from Minneapolis were poignant and gut-wrenching.

They included a woman who had gone to work at Walmart as part of a “welfare to work” program.  She had been told it was a “career path.”  Three years and two promotions later, she described her job as “dead end” with a wage of $9/hour.  Another 56-year-old woman talked about outsourcing and how it had taken away her job of 30 years.  A professor from a state university system reminded the representative of the generation coming of age in a society that offers them no work.  He talked about the young, smart and eager graduates who want to take their talents and energy into the world and how there are no jobs for them.

“This tour is about reminding people outside the Beltway that there are people in Congress standing with them,” Ellison said.  “We care about the future of our country and its people.  This is now an issue of will and we have to organize to get the Republicans to do the right thing.  We need to convert this energy to action.”

For a complete list of the tour stops, check out the link below:

The site also offers information on how you can text, write or call to show your support.  This is a call to action and a chance for people to unite for American jobs to keep America working.

Don’t underestimate the hard work needed to get the word out and continue to turn energy into action.  The Sunday (Minneapolis) Star-Tribune, the home city newspaper of Rep. Keith Ellison did not carry one word about the gathering.  Instead it featured a story on a rally held in Minneapolis the same afternoon attended by former Republican Governor Tim Pawlenty and Minnesota Republican Congresswoman Michele Bachmann.

“The power of corporate money can be overcome,” Ellison reminded the crowd.  The hope, he said, is that the tour to Speakout for Good Jobs Now starts that process.