Marching Against Voter Suppression In Minnesota

With the words and memory of Dr. Martin Luther King, Jr. invoked, I joined more than 100 Minnesotans Sunday afternoon to march from the Sabathani Community Center to the Martin Luther King Jr. Park on the city’s south side. The march brought together community organizations, civic leaders and citizens angered by the voter suppression amendment due to be on our November ballot as a constitutional amendment.  Yes, we here in Minnesota are being asked (thanks to our Republican controlled legislature) to amend our constitution with something that one Minnesota Supreme Court judge has already hinted may be unconstitutional. 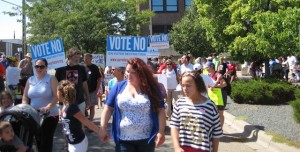 Minnesotans marched Sunday to protest a voter suppression amendment due to be on the ballot this November.

Through the streets of Minneapolis we marched after being energized by speakers who reminded us that it was our turn to follow Dr. King’s example of always speaking truth to power.  And the truth of the Minnesota ballot initiative this November, if passed, is that it will forever change how Minnesotans cast their vote and it could keep up to 500,000 eligible Minnesotans away from the polls.  We here in the Land of 10,000 Lakes led the nation again in 2008 in voter turnout thanks in part to our civic pride and a wonderful thing called same day voter registration, which allowed more than 540,000 individuals to cast ballots on election day in 2008.

Our amendment (also an unfunded mandate with the cost of implementation due to fall to property tax payers) is falsely labeled as “voter photo ID.”  In reality, it would eliminate same day registration and completely jeopardizes absentee voting.  In its place would come provisional balloting — something Minnesota has never had.

As one speaker reminded the crowd before we took to the streets, “Jim Crow has come to Minnesota.  By putting this on the ballot in November, they have shown us where their vulnerability is.  If we vote, they lose. They know that if they keep us away from the polls – even by just a small percentage, that they control the power.”

A Native American speaker from Wellstone Action (an organization that promotes the legacy of former Minnesota Senator Paul Wellstone) proudly showed her tribal nation ID, which she said allows her to board a plane, but which would not allow her to cast a vote if the amendment passes.

Minnesota’s voter suppression law takes on a slightly different flavor from others that hit after the 2010 elections.  Although Republicans gained control of our state legislature by the smallest of margins, Democrat Mark Dayton was elected governor.  His veto of any proposed law, forced the Republicans to bypass Dayton and put the initiative on the November ballot as a constitutional amendment.  The Republican controlled legislature also pushed through a constitutional amendment on gay marriage for this November, even though the state already has a law that defines marriage as between a man and a woman.  There was no stopping our legislature when it came time to implementing ALEC “cut and paste” legislation here in Minnesota. 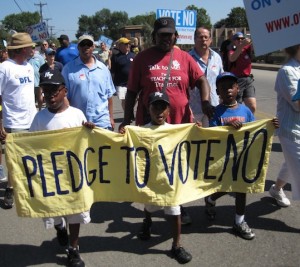 The young and the old marched against voter suppression laws.

And so we marched.  Many in the crowd asking, “haven’t we already done this?” in reference to the 1960s civil rights marches that finally granted full voting rights to African Americans.  One female marcher even donned a costume from turn-of-the-20th-century America in honor of the suffragette movement, carrying a sign that asked, “Is this 1912?”

Our Supreme Court is due to make a final ruling on this amendment perhaps as early as this week.  The amendment is before the Court because of the “bait and switch” nature of the language as it currently stands.

If the Supreme Court lets stand the ballot initiative as currently written, Minnesotans will not know the deep, hidden nature of what the changes will entail.  The initiative currently states:

And so we marched…and so we talked to others…and so we will continue to talk to our neighbors and fellow citizens.  Our democracy is under attack here in Minnesota, just as it is in other state throughout the land facing voter suppression laws.

From the words of Dr. King to a park named in his honor, we marched to remind people in Minnesota and everywhere:  The real power belongs to ‘We The People.’ It’s up to us to once again do the work to reclaim it from those who seek to take it from us.