A wise Jesuit—no not Pope Francis (Jesuits have a long tradition of nurturing wisdom) once asked: When you walk into a room of people do you think of yourself as more than the rest of the group?  Less than the rest of the group? Or one of the group?  A profound question that has remained with me for years and resurrects in my consciousness more and more as our nation refuses to consider the least among us as it plots strategy to keep our government shut down and send the world economy into uncharted territory.

It has been well-documented that the poor and disadvantaged have been severely hit by the sequester cuts, the federal government shutdown and the recently-passed Republican farm bill that strips billions of dollars from the food stamp program. How and why is it that we somehow think of ourselves as “more than” the disadvantaged in our midst? Do we forget that people are people? Can we not see the human faces—that those struggling today are somehow not one of us? Do you see the human face of those who fall into the category of poor or working poor? Everyone—whether it is someone struggling with addiction, mental illness, lack of education, physical disability, a disintegrating family life, an unplanned pregnancy, physical/sexual/emotional abuse or exploitation—is still capable of experiencing all the same human emotions that we do: happiness, sadness, anger, trust, jealousy, joy, gratitude, etc.  Do we forget our human connectedness? 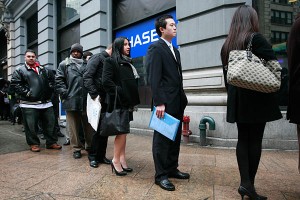 Do we see the poor among us?

Daniel Goleman, in a recent OpEd in the New York Times entitled “Rich People Just Care Less” noted: “Turning a blind eye. Giving someone the cold shoulder. Looking down on people. Seeing right through them. These metaphors for condescending or dismissive behavior are more than just descriptive. They suggest, to a surprisingly accurate extent, the social distance between those with greater power and those with less—a distance that goes beyond the realm of interpersonal interactions and may exacerbate the soaring inequality in the United States.”

That Jesuit I referenced would also ask us on many occasions if we had any poor people in our daily lives? And if not, why not? Not just the once-a-month trip to help at the food shelter, but less advantaged people who personally touched our lives—the senior living on a fixed income in a federally subsided housing project, a working single mom, an immigrant, etc. When people’s lives touch our own, it can change attitudes and behaviors unlike anything else. I think of someone named Jesus of Nazareth who told his audience that he had come to give sight to the blind. Do we really think that this man who spoke in parallels was talking only of physical blindness? Are we blind to the poor among us?

My youngest daughter, after college graduation in 2009, spent a year of service with the Jesuit Volunteer Corps Northwest. It changed her life forever—especially in terms of how she “sees” other human beings. She recently told me that a lot of people who receive services HAVE jobs, but that they don’t earn enough money to make ends meet. Or, they do the jobs that you and I would never dream of doing (working an overnight shift sorting through trash at the processing center; doing a dangerous welding job; holding signs by the side of roads; food service; etc.). And the assumption that people WANT to just have things given to them is wrong. Most people, with whom she interacted, when given the choice would much rather have the freedom that a job and wages provide. Real life experience smashes pre-determined “blind” thinking.

Sojourners’ Jim Wallis (one of 23 progressives featured in Wisdom of Progressive Voices) has written and spoken on multiple occasions about how a budget is a moral document. His recent commentary, “Why The Government Shutdown Is Unbiblical,” is profound in its bluntness. A question or two to ponder as we await the outcome of the disaster that we now call Washington politics: Do we allow our elected representatives to enter budget discussions thinking they are more than, less than, or one of the rest of us. When you peel away the onion that is this current budget and financial crisis we face, it’s all very simple. We have allowed greed and fear to blind our eyes to the plight of those who are “one of us.”