On, Wisconsin: The Legacy of “Fighting Bob” LaFollette 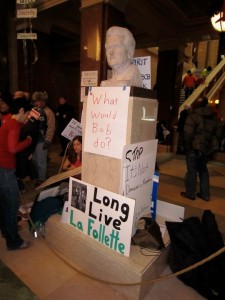 What has transpired in Madison, Wisconsin, this past week is nothing less than amazing, astounding and inspiring.  The nation, and the world, has watched as tens of thousands of marchers and protesters fight Governor Scott Walker’s union-busting attempts.  As a native Wisconsinite, I am not surprised.  For the rest of the nation, perhaps a brief history of the strong union and progressive roots of the Badger state is in order.

Wisconsin’s rich progressive history is best exemplified by Robert “Fighting Bob” LaFollette.  It is his spirit and voice that are alive in the protests and marches of 2011.  This new generation has grasped what “Fighting Bob” so fiercely fought for nearly a hundred years ago.  If you don’t know who “Fighting Bob” is, I urge you to find out more.  Here’s a brief history on this incredible man who shaped Wisconsin politics (and the nation’s) in the early 20th century.  We all owe much to Bob LaFollette.

He served as Wisconsin’s governor, U.S. Congressman and Senator before running for president in 1924 on the Progressive Party ticket.  His party platform called for government ownership of railroads and electric utilities, cheap credit for farmers, the outlawing of child labor, strong laws to help labor unions, and protection for civil liberties.  He strongly fought against U.S. involvement in World War I.  He advocated for women’s suffrage.  He is considered the father of the American Progressive Movement and he spoke passionately for the “common man.”  His supporters included laborers, farmers, small businessmen, professionals and intellectuals disturbed by how powerful business interests controlled access to political power.  He was once described as a man who knew no fear.

His ideals helped Wisconsin lead the nation in progressive causes that ranged from the 8-hour work day, the 40-hour work week, worker’s compensation and unemployment insurance.  His name is revered by working-class Wisconsinites and every year in September, the “Fighting Bob Fest” is held outside Madison, bringing together many who are fighting for today’s progressive causes.  Listen to what he said in a speech from 1897:

“The existence of the corporation as we have it with us today was never dreamed of by the fathers (of this country)…These corporations are masters of manipulation in finance heaping up great fortunes by a system of legalized extortion…So multifarious have become corporate affairs; so many concessions and privileges have been accorded them by legislation; so many more are sought by future legislation, that their specially-retained representatives are either elected to office directly in their interests or maintained in a perpetual lobby to serve them.”

What’s happening today in Wisconsin is a repeat of corporate dominance of government.  And Wisconsinites know this.  Governor Scott Walker’s budget crisis is a fake. Walker, bought and paid for by the Koch brothers and other corporate interests, does the bidding of the next generation of corporate rulers wanting to take over our government.  That point has been proven over and over again by countless reports that discredit Walker’s speeches about budget shortfalls.  This is not a fiscal matter.  This is union-busting.

I’m guessing that Scott Walker forgot his history lessons about “Fighting Bob.”  The tens of thousands of Wisconsinites in the street this past week have not.  Those marching and protesting are the children and grandchildren of Wisconsin union members who made the state a bastion of middle class America.  The parents and grandparents of the 2011 protesters were proud union members who worked for many of the manufacturing giants of Wisconsin:

These were the companies that shaped Wisconsin in the 20th century.  All with union labor.  Those marching today in Madison benefited from the toil of their union ancestors and they will not easily forget and allow that heritage to be so easily stripped by a corporate-funded Republican party.

Our best hope is that the voice of Fighting Bob LaFollette continues to be brought back to life.  His story is alive in the streets of Madison.

“The basic principle of this government is the will of the people,” he once said.

On Wisconsin! And long live the spirit and wisdom of Fighting Bob.