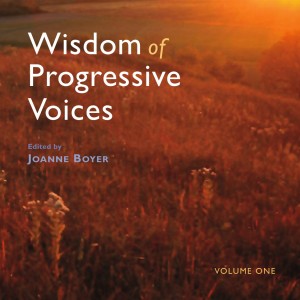 “When you are weary, when you are beaten down by the forces of intolerance, injustice and ignorance….pick up Wisdom of  Progressive Voices, for the words of these  gifted, courageous men and women will lift you up.  They will help you get back into action, fighting for the progressive way.”

“Wisdom of Progressive Voices is an incredible collection of the words of leaders who have advanced social, economic, political, and environmental justice.  This book is an inspirational resource for anyone, especially those working to advance the progressive movement.”

“This wonderful compilation reminds us of the strong progressive tradition of our country and how the wisdom spoken by those before us is as true today as ever before.”

–Janet Robert, President, AM950 – The Voice of Minnesota

Read a review of Wisdom of Progressive Voices at http://prairieprogressive.com/2011/08/22/book-review-wisdom-of-progressive-voices-edited-by-joanne-boyer/

Listen to Joanne Boyer interviewed by Matt Rothschild of The Progressive (June 15, 2011).

The first edition in The Wisdom Voices Book Series, Wisdom of Progressive Voices presents biographical sketches and important quotations from some of the most inspirational figures in our history.

Wisdom of Progressive Voices reminds us that progressives today should see themselves as the next generation of an American bloodline of progressivism that began with our parents, grandparents, and even great-grandparents in this country. This book provides an historical perspective on those wonderful progressives who have fought the good fight from the advent of the American Progressive Movement onward.  Readers can enjoy profiles on many of America’s most articulate leaders who never lost sight of the struggle for social justice, workers’ rights, a clean environment and a world in which peace – not war – is the norm.  Those profiled in this first edition of Wisdom of Progressive Voices include: