Our Movement Moment Of History Is Here: Move To Amend

“We are at a movement moment in history, said David Cobb, National Projects Director of Democracy Unlimited and lead speaker on the Midwest Barnstorming Tour of Move To Amend. Cobb’s stop in Edina, Minnesota, Sunday drew a packed crowd of well over 100 people on a glorious summer Sunday afternoon.  “We are at a point where people are engaged and ready to take back control, and these are exciting times because it’s time for us to do what other movements have done in the course of history and say ‘this is our country.’ ”

Move To Amend: Fighting Back Against Citizens United

Move To Amend is a coalition of hundreds of organizations and tens of thousands of individuals committed to social and economic justice, ending corporate rule, and building a vibrant democracy that is genuinely accountable to the people, not corporate interests. Cobb’s Midwest Barnstorming tour is focused on getting individuals at the local level to become involved with the monumental – but doable – task of amending the U.S. Constitution in wake of the horrific U.S. Supreme Court Citizens United decision that allowed unlimited corporate money to flow into political campaigns. The tour continues this week with stops throughout Wisconsin and culminates this weekend in Milwaukee with the Midwest Regional Convergence. Information on specific tour stops and the weekend gathering can be found here.

Anyone can go to Move To Amend’s web site and sign their petition that says: We, the People of the United States of America, reject the U.S. Supreme Court’s Citizens United ruling, and move to amend our Constitution to firmly establish that money is not speech, and that human beings, not corporations, are persons entitled to constitutional rights.

But for those lucky enough to be on the Barnstorming tour stop, Cobb’s artful and engaging presentation offers those in attendance an invaluable history lesson on the role of corporations in U.S. history, dating back to that famous tea party in Boston, when colonists threw overboard only one kind of tea – tea from the East India Company, the major British corporation of its time.

“If we spend some time studying history and digging deeper, we’ll find that the American Revolution was not just a rejection of a monarchy, but also a people’s rebellion against the illegal corporation of its time,” Cobb said.

Cobb reminds the audience that the colonies were actually set up as “charters” with an appointed royal governor (CEO) who was tasked with the legal responsibility to plant crops, to rule and to govern in the name of the king so as to benefit the king and the other “stock holders” of, for example, the Massachusetts Bay Company.

“Let’s not forget,” Cob said, “that it was the unfair laws being written by Parliament – a Parliament that was 100 percent invested in stock in the East India Company that led to the American Revolution. What caused the colonists to stop groveling to the king, asking the king to become more socially responsible? It was the magic of the social movement of its time. 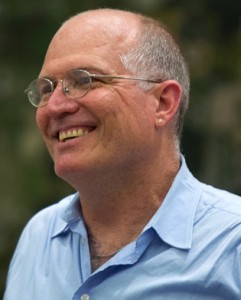 David Cobb: We are living in a movement moment

“Today, there is justifiable anger again in the United States. I call it righteous anger and I use that word carefully, because I am the grandson of a Baptist preacher. Righteous anger only comes from anger over injustice or exploitation and it requires action. Righteous anger is what provoked the abolitionist movement, it’s what helped the women come together in Seneca Falls, and it was what was behind the trade unions and the civil rights movements. And we are at that moment again.

“It’s what transforms your anger into joy, helping create a society with a just system. That’s a joyful experience…working in solidarity with good men and women who share those values. You don’t just stay angry when you engage in the work of change.”

And what work there is to be done. Amending the constitution is no easy task, but as Cobb reminds the audience, 500 years ago, people believed in the “sovereign” authority of a king to declare how society was run.  “500 years ago that’s all there was (sovereign kings), and 500 years is nothing more than a blink of an eye (in terms of history),” Cobb said. “When people say it’s too hard (amending the constitution), they haven’t been paying attention to history. Profound changes happen when people commit to change. People started acting and thinking differently in the colonies and things changed. If it’s true that they (the power elite of today) have hijacked our country, then we need to think and act differently today. And we are starting to do that.”

Cobb concludes his presentation by reminding people that it was a supreme act of judicial activism that allowed 5 individuals to tell 300 million people that corporations are people.  “It was an illogical and stupid idea,” Cobb said.  “Corporate personhood is how the ruling elite stole the country from us and they used our legal system to legitimize the theft.  It’s time for us to do what other movements have done and say, ‘This is our country.’

How can individuals affect change and be part of the social movement underway? There’s no better way to start than by perusing the Move To Amend web site, digging into their FAQs, signing the petition and getting involved with a local chapter of Move To Amend.  And, always feel free to say, “No, that’s not true” to anyone who says, “Corporations are people, my friend.”

Wisdom Voices will be featuring Cobb, also the Green Party candidate for president in 2004, in September.  Look for our Progressive Profile on this energetic activist next month.

To listen to David Cobb in his own words see below.