Our Shared Humanity: Can We See Ourselves In Today’s Refugee Crisis?

“No one chooses to be a refugee. It’s something that happens to you.”

We re-connected with David Dvorak M.D., M.P.H., who until recently practiced emergency medicine in Edina, Minnesota. We had met David, a proponent of single payer and a member of Physicians for a National Health Program (PNHP), at several health care action functions over the years.

David had just returned from his second stint as a medical volunteer with Boat Refugee Foundation, a Dutch organization providing emergency aid and supplies to boat refugees now in camps on islands off the Turkish coast.

“It was in the face-to-face meetings I had with the refugees…when I heard their stories of suffering and the fact they risked their lives get their families across the sea in smugglers’ boats that was so profound for me,” Dave said.

After two trips to the island of Samos, where he provided primary care services for those in the camp, and before his next visit in March, David spoke of his experiences, and – how, through a recently released song and video, he hopes to help others to better understand the humanitarian crisis that exists with this refugee crisis.

Although the Syrian war and the instability in the entire region is a complex issue, David veers from political talk to focus instead on the current humanitarian crisis caused by the bombs, destroyed cities, and the destruction everywhere. Too often the individual suffering is lost amid screaming headlines and 24-hour news cycles.

David hopes that through his song, “Refugee Lullaby”, and video, others may gain a clearer focus on our shared humanity, and in the end, have a softening of hearts and a lessening of fears as the world tries to deal with what has been described as the worst refugee crisis in decades. The song also serves as a fundraising vehicle for the work of the Boat Refugee Foundation.

“I wanted to help people see our shared humanity and to understand that these people are not dangerous. They are just like us,” he said. “This situation transcends religion and national borders. This is a humanitarian crisis on a mass scale. The refugees are victims of geo-political disputes and they are desperate and they are suffering.

“I felt the best way to convey the situation was to portray it in song through the eyes of a refugee father trying to protect his son.

“With this song, I hope to appeal to us as human beings to understand their plight. We are so wired to be afraid of terrorism…there’s so much anxiety and fear (in our lives today). I wanted to do what I could to help people choose compassion over fear.

David worked on Samos Island, situated one mile off the coast of Turkey. It is a Greek government-sponsored camp that houses Syrian, Iraqi and Afghanistan refugees who travel across Turkey and then by boat to the islands/camps. This particular camp, built for a maximum capacity of 800, houses approximately 2,400 people. “You can imagine the overcrowding, the poor sanitation, the flimsy tents that don’t really protect them from the elements,” he said. David provided primary care services for those with chronic diseases as well as medical support for any acute problems that arose.

Boat Refugee Foundation also supplies non-medical aid (distribution of food and diapers in the camps) as well as teaching children English and providing activities such as art classes. “They are staffed by wonderful, dedicated volunteers working to preserve the human dignity of the refugee people,” David said of the organization.

“It was in the face-to-face meetings I had with the refugees…when I heard their stories of suffering and the fact they risked their lives get their families across the sea in smugglers’ boats that was so profound for me,” he said. “They are engineers, doctors, lawyers, professionals who want to go home. Only, there is no home to go back to. It has all been destroyed. They are fleeing war in their home countries.

“These people are applying for asylum and the world is turning its back on them. So, when I returned I wanted to write something that expressed this experience that was so overwhelming. I wanted to put that experience into words and decided the best way to do it was through a song.” 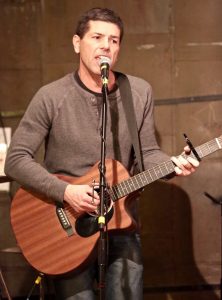 All proceeds from the sale of Dave’s CD go to support Boat Refugee Foundation.

Together with local music producer Don Strong, David put together a solo album, which featured the song “Refugee Lullaby.”

David realizes that not everyone can follow the path he chose to help. He does hope, however, that the song and an awakening to the humanitarian plight of the refugees will move others to donate to Boat Refugee Foundation. He also notes, there’s much we can all do right in our own communities to help breakdown the walls of fear that surround too many of us today.

“We need to get out and do something instead of just sitting inside and watching cable news. We need to be with other people…those who are different from us and try to understand our shared humanity. You don’t have to fly overseas to do that. There’s so much that can be done in everyone’s own communities. There’s a magnet on my refrigerator at home that says: ‘Life begins at the edge of your comfort zone.’ Make the change you’re capable of making.”

All proceeds from the CD sales go to the Boat Refugee Foundation. To purchase Dave’s CD click here:

To listen to David’s song and to find out more, click below.

PBS Frontline recently aired “Exodus,” a documentary that combines video filmed by refugees and migrants themselves with footage already in hand from PBS director James Bluemel. Viewers meet Hassan, an English teacher from Damascus, Syria; Isra’a, a young Syrian girl from Aleppo; Ahmad, who worries about his wife and daughter who stayed behind in Syria; Alaigie, a Gambian man who dreams of lifting his family out of poverty; and Sadiq, who fled Afghanistan to escape the Taliban.

For more information on the Boat Refugee Foundation, click here.