Progressive Democrats of America: Doing The Everyday Hard Work for The Common Good

No one said it was going to be easy – being a progressive that is.  Social movements, simply stated, are hard work that takes time.  Patience.  Fortitude. Perseverance.  Those are hardly the buzzwords of our 21st century, 24-hour news cycle environment.  But the old saying that anything of value has a price tag attached to it certainly is true of today’s progressive movement.  And the price tag of hard work, grass roots community building and determination are exactly what marks the work of the Progressive Democrats of America (PDA). 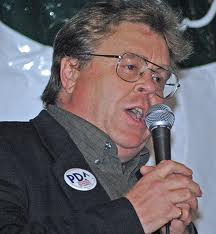 “The overarching benchmark is that we are organizing a community of activists that are willing to do the work and believe we can build a passionate and progressive government.”

PDA was founded in 2004 to transform the Democratic Party and to seek to build a party and government controlled by citizens, not corporate elites with policies that serve the broad public interest, not just private interests. PDA’s “inside/outside” strategy is guided by the belief that a lasting majority will require a revitalized Democratic Party built on firm progressive principles.

“We were active in the national arena in 2004,” said PDA Executive Director Tim Carpenter. “Howard Dean and Dennis Kucinich were active at that time trying to unite the party around issues such as single payer and reduction of military spending.  We began with the dream that we could elect a progressive president.  Although that didn’t succeed, now nine years later we have put together an organization that is committed to those issues.  We’re working at the grass roots level, by Congressional District, working inside and outside of the Democratic Party.

“What makes PDA unique as an organization is that we believe you have to work both inside to remind the Democratic Party of our progressive ideals as well as outside the party.  Every great social movement whether it was the women’s movement that began in Seneca Falls in 1848 and ended outside the White House with demonstrations that led to the 19th Amendment or the Civil Rights movement when Rosa Parks (in 1955) refused to move that resulted in the signing of the Civil Rights bill in 1964 – every social movement has a uniting of the “inside and the outside.”  And that’s what PDA is about – building a larger progressive social movement.”

The focus areas for PDA are no small task.  They include:

“As I reflect on the last nine years, I think it’s important to realize we’re still here,” Carpenter said. “It’s been years since we were just an idea and now that idea has taken shape. There are activists working around the country on the inside and outside strategy.  I think the measure of PDA and whether or not we’re effective is to look at benchmarks. Whether it’s raising money or generating letters, those are all very important.  I think we will reach all of those.  But the overarching benchmark for PDA as I’ve stated is that we are organizing a community of activists (inside and outside) that are willing to do the work and believe we can build a passionate and progressive government.

“The measurement is not only that we survived but also that we’re growing and building a movement. Whether we call ourselves progressive democrats five years from now or whatever the group of people who are building and growing this community is called will ultimately stay sustained and active and relevant and current. I think that is the most measurable thing.”

Recent PDA activity included a strong push for the Progressive Caucus’ Back To Work Budget, which included letter drops and educational efforts at Congressional offices.  Although the vote ultimately failed, Carpenter says it represents a start.  84 votes for the Back To Work Budget and 33 signers to Rep. Alan Grayson’s letter to President Obama stating there will be no cuts to Social Security, Medicare or Medicaid. “That’s our foundation, Carpenter said. “There’s long way to go, but at the same time, we’re on our way.”

What is it in Carpenters’ DNA that keeps him and the organization focused and optimistic?  An early organizer in one of the most conservative areas of the country (Orange County), Carpenter also worked on campaigns in the late 1960s-early 70s for Jerry Brown, Tom Hayden and George McGovern.  “I struggle like everybody else today, but I also believe it is our responsibility to keep moving and pushing and to stand on those shoulders that brought us to this point of a progressive community.

“At an early age I had serious health issues (degenerative arthritic condition and cancer as a young adult).  I had to make decisions early in my life on what was important and what wasn’t and that altered my viewpoint at a young age.  I think that, coupled with the fact I grew up in a very Irish Catholic family. I went to Catholic grade school; learned from the Jesuits. I took very seriously the social justice gospel and from there began to chart out my course.

“Who are the heroes for me? The obvious ones that stand out like Dr. Martin Luther King, Dorothy Day, and Michael Harrington. But it’s really the folks who do the day-in and day-out work of our communities.  The people who read the blogs and who everyday try to make a difference; the people who stand up against the main stream and hold to a vision that healthcare is a human right and we can reduce military spending. There are thousands and thousands of people who get up everyday and do the work — whether it’s an individual who writes a member of congress or organizes house parties to help educate others. At the end of the day, those are the people who make a real difference in our lives. I often like to think of Margaret Mead’s quote that says, “in the end it’s small groups of dedicated people who bring about change.”

“Sure, we run into naysayers. But at the same time, it’s important and essential to acknowledge the little victories along the way. At the end of the day it’s going to be about the journey. Most of the work we’re doing, we’re not going to see the end results in our lifetime. But it’s important that we reach those markers and celebrate the victories like passing a bill, or getting more co-sponsors to a bill. It’s by pulling together that we have those major victories, whether that’s finally talking about getting our troops out of Afghanistan.  We’re finally out of Iraq. We’re on the horrible 10-year anniversary of the invasion, and it was pretty hopeless during a lot of that build up. But we organized and put pressure on our government to get the troops out. Those are the marker that we acknowledge and celebrate.”

Hopeful signs that Carpenter sees daily in his work with PDA include the passion and energy the “younger generation” has for progressive causes. “It’s there,” he said about the work of the next generation.  “Not in the way we sometimes look at it from the old ways of organizing, but I can say unequivocally in the work I’m doing with PDA and the cities I’m visiting that the youth are engaged and active.  I point to a group called I Matter. They have a group of 10-11 year olds who are organizing their grade schools and high schools for a better planet that they will inherit from us.  We haven’t done a very good job when it comes to climate and global warming and I Matter is at the forefront in really organizing and speaking out to create a community that understands the imperatives and the perils we face right now on climate change.

“We took a group of kids from I Matter to Congress last year and it was one of the most inspirational works that I did…that’s where inspiration for me come from. We have to remember this generation is meeting on Twitter and on Facebook. They don’t like to go to meetings. Think of when we grew up. We would wait all day for a half hour of Walter Cronkite. It’s a much different world that we’re living in and organizing in, but yes, the younger generation is very much engaged.”

In addition to the continued push for the Back To Work Budget, PDA will also be focused on key events in April that include Rep. Keith Ellison’s re-introduction of the Robin Hood tax as well as the awaited decision on the Keystone Pipeline.

“The Environment.  Many are already saying it’s simply too late,” Carpenter said.  The next couple of months will be crucial with the tar sands and the Keystone Pipeline. We need to stop that pipeline and deal with a larger strategy that deals with the climate, carbon tax, green jobs and getting rid of nuclear power.

“Long term we have to hold to our vision that health care is a human right and to reduce the amount for military spending.  We need to move that money out of the Pentagon and into the work at that needs to be done at home.”

One of the best ways to stay abreast of what’s happening on progressive issues is to stay connected to PDA.  And, the best way to learn more about PDA is to visit their web site by clicking here. Like them on Facebook and you’ll get reminders and invitations to all of their topical monthly conference calls. You’ll have the opportunity to connect with people from literally around the country who are concerned about the progressive issues for which PDA fights. Their eNewsletter is another great way to learn and “click” your way to more action.

The following links provide more information on Carpenter and what motivates him:

To hear Tim in his own words, check out his recent interview with talk show host Thom Hartman:

You can donate directly to PDA by clicking here or by checking out our special offer.  We are donating portions of every individual copy of Wisdom of Progressive Voices directly to PDA. The memory of Bob LaFollette, Dorothy Day, Rachel Carson and all of the progressives featured in our book owe a thank you to PDA and their continued work.