Really Paul Ryan? There Was Another Choice Besides Ayn Rand

There are times in today’s political discussions when I just want to yell: “My head hurts from the insanity. “ Today’s Excedrin Headache #100 comes from this past weekend’s announcement that Wisconsin Rep. Paul Ryan would be the Republican vice president candidate. Of the multitudes of headaches that stem from Ryan being on the ticket, I am going to focus on just one.

Ryan, a Roman Catholic, insists his “mentor” was Ayn Rand, the atheist and prophet of individualism. Does anyone but me have the tune, “one of these things is not like the other” ringing in their heads? 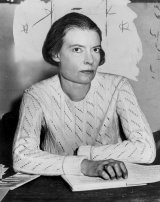 Of all the people to whom Ryan could have gravitated as a baptized Catholic, I wonder how it is he missed the teachings of Dorothy Day, the founder of the Catholic Worker Movement and considered by many to be the most significant, interesting and influential person in the history of American Catholicism. Both Day and Rand are contemporaries and yet Ryan chose to embrace the teachings of an atheist vs. a woman who serves as a courageous witness for peace and who led an extraordinary example of the Gospel in action.

Day is one of 23 individuals featured in my book Wisdom of Progressive Voices. She didn’t make caring for the poor and oppressed a choice of either individualism or government programs. Rather, she challenged those who lived through the Great Depression, World War II and the Cold War, by example, to bring the words of Jesus of Nazareth to life with actions. Her motivation was love, forming relationships with those she served and working, as she said, to make the world, “a little simpler for people to feed, clothe, and shelter themselves as God intended them to do. Love and ever more love is the only solution to every problem that comes up. “ And my personal favorite, “Those who cannot see Christ in the poor are atheists indeed.”

For Ryan to claim roots to Catholicism yet embrace policies that devastate the poor and struggling while his policies push for yet even more for the wealthiest among us flies in the face of all that is Catholic Social Justice teaching.

Ryan also misses the point that Day so wonderfully embraced – that not only is all life sacred, so too is all life broken, whether you live in the poverty of a slum or the wealthiest suburbs. Someone’s brokenness can manifest itself in abject poverty, yet others can suffer from divorce, addiction, and/or loneliness. We all struggle in life and it is only by recognizing the face of Jesus of Nazareth in everyone we encounter (When Lord, did we see you sick?) that our brokenness can be made whole.

Or as Day said:

“How often we invite Our Lord into worse places than the stable. We offer Him the dung of our natural affection for objects; we offer Him the straw of frivolity, the ox of stupidity, the ass of selfishness. So we must ask for forgiveness and faith for our mind, hope for our heart and charity for our will.”

“The poor often are poor all around. They can be poor in gratitude. But they are not put in our way to be judged, only that we may purchase heaven for them.”

“The social order which depends on profits, which does not consider men’s needs as to living space, food, is a bad social order and we must work to take that kind of society where it is easier for men to be good.”

Sister Simone Campbell, who led the Nuns On The Bus tour, had a face-to-face talk with Paul Ryan at the end of the tour. She said he told her that he talks about individualism because “the other side” only talks about community. Sister Simone countered with a “not so fast my friend.” She told Ryan, “I talk about individualism. We all have an individual responsibility to build community.”

Linda Stamato of NJ Voices expressed much the same frustration of Ryan’s anti-Catholic Social Justice teachings in a brilliant piece from last May. She concludes by saying, “It looks to me like Dorothy Day was inspired to create a path to social justice in America. Paul Ryan is doing his best to cut it off.”

Renowned author Parker J. Palmer phrases it slightly different: “Even if one believes that religion and politics don’t mix, there is still a strong reason to believe that Christians should concern themselves with public life. For the church preaches a vision of human unity which means very little if not acted out in the public realm.”

Caring for people is not an either/or choice. We care for people as individuals but more importantly, anyone who follows the teachings of Jesus of Nazareth or was raised in the Catholic tradition of social justice, cannot ignore the pain and suffering that is alleviated when we as a society (via government programs) decide to say, we can do better.

What motivates Paul Ryan? I can’t claim to know that, but I can challenge his understanding of Catholic teaching when he chooses to align himself with an atheist vs. a modern day saint who formed the Catholic Worker Movement. A person who claims to be “better than” or “more than” the poorest of the poor rather than “one of” the many who suffer in this world, can take his talk of “magestrarium” right to the Pearly Gates and see how far that gets him there.