There is a sense of sadness that surrounds the writing of our October Progressive Profile. 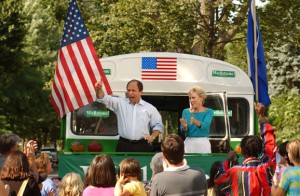 Paul and Sheila Wellstone and the famous green bus. Their legacy remains strong thanks to Wellstone Action.

This month marks the 10th anniversary of the plane crash that took the life of Minnesota Senator Paul Wellstone, his wife Sheila, their daughter Marcia, and several key staff members (Tom Lapic, Mary McEvoy, and Will McLaughlin).  The pain 10 years later is as real as it was that awful overcast, cold, rainy day on October 25, 2002 when the news first broke.

The brilliant progressive voice, the joy that emanated from everything he did, his willingness to fight for the people, the honest-to-goodness belief that government and politics could make people’s lives better.  The loss of Paul Wellstone can never be measured.  How much different would the U.S. Senate be today had he lived?  Of course we’ll never know.

Wellstone is one of 23 great progressives featured in our book Wisdom of Progressive Voices.  He never shied away from being a progressive.  He trumpeted the cause of labor, farmers, the rural poor, and the environment.  A man of powerful convictions, he was a dissenting voice in the early votes to go to war with Iraq in the fall of 2002.  He was in a hotly contested senate re-election bid when he came out firmly against the invasion.  Common Dreams back in 2002 captured the essence of his commitment. At the time, Wellstone said:

“I know the conventional wisdom among Republicans is that this is the issue that will do him in,” Wellstone said, speaking of himself. “But I think people want you to do what you think is right. I think people want to support the president, but they’re very worried about doing it alone . . . I think people in Minnesota have the same concerns that I have.”

His green bus became famous as he took to the road in 1990 running for U.S. Senate against incumbent Rudy Boschwitz.  It was as though the Minnesota DFL party said, “Let’s nominate this Wellstone fellow because we don’t have a chance of winning.”

A political science professor at Carleton College in Northfield, Minnesota, Wellstone focused on questions of economic justice and poverty and was heavily involved in local community organizing projects. Although outspent 7-1 (back in 1990) by the Boschwitz campaign, the green bus and Wellstone never stopped campaigning among the people and eventually he won the seat.

The passion and joy of Paul Wellstone: We could use it in today’s political scene.

The Wellstone legacy is carried on through the dedication and work of those at Wellstone Action, a non-profit established after Wellstone’s death. It was founded under the care and watchful eye of Jeff Blodgett, Wellstone’s former campaign manager and close friend.

Wellstone Action is the largest training center for progressives with a national center for training and leadership development for the progressive movement through educating, mobilizing and organizing.

On this 10-year anniversary of the Senator’s death, their site is filled with tributes and memories of one of the greatest progressive leaders to come from a state with a strong progressive heritage.

A visit to their site (and a contribution to their cause) is the best way to remember the life and legacy of this incredible individual who graced our lives with his presence for far too short a time.  In addition, we at Wisdom Voices, will donate $10 from every individual sale of Wisdom of Progressive Voices purchased during the month of October to Wellstone Action.

A few of our favorite Wellstone quotes:

“The people of this country, not special interest big money, should be the source of all political power. Government must remain the domain of the general citizenry, not a narrow elite.”

“I think we ought to remember what Emerson wrote: ‘The true test of civilization is not the census or the size of the city or the crops, but the kind of man (and I’d add women) the country turns out.’  The kind of national goal we ought to be thinking about is way beyond national product – it is how do we as a nation help our children be the best kinds of people they could possibly be?”

“We need a new kind of citizenship, so that we can see citizens as themselves earning the rank of patriot because of their involvement in their community affairs….We as a society need to be encouraging people to focus not just on individual wants but on serving the larger community.”