The scene was all too familiar for someone who was in Madison in February to watch and partake in the demonstrations against Wisconsin Governor Scott Walker and his right wing non-budgetary crisis budget that he was attempting to pass. 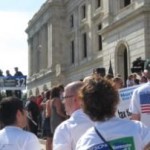 Minnesota protesters rallied in St. Paul for "fairness" in the budget discussions.

State Capitol steps filled with speakers, protestors, hand-made signs, banners held by standard bearers held high on the concrete pillars surrounding the steps, and protestors booming out the chorus of Woody Guthrie’s “This Land Is Your Land.”

This time, however, the scene was in St. Paul, Minnesota.  In the midst of a governmental shutdown in which the Republican controlled legislature refuses to raise taxes on two percent of the state’s total population, the workers, the “average folks” were out to protest for “fairness” in the approach to how the state governs.

The deep divide within Minnesota’s state government is mirrored elsewhere and, most notably, in Washington, D.C.  The issues are all too familiar no matter where the spotlight falls.  As I stood in the unrelenting sun of a Minnesota July afternoon on the steps of my Capitol and watched and listened, I spent more time in reflection than I did in clapping, singing and protesting.

I thought back to the optimism that ran through many Democrats in early November 2010.  The hope was that with a Democratic controlled House and Senate, if Mark Dayton could be elected, think of how we might be able to “turn the ship around” after the tenure of former Governor Tim Pawlenty.  The words “single payer” were even being said in quiet tones.  Then the morning after the election, the surprise no one had anticipated.  The Minnesota House and Senate had flipped Republican.  The state senate on less than 900 votes total.

Had people forgotten how important local elections are?  How could any “independent” voter not have known that a vote cast for Republicans would lead to what we now have in St. Paul?  How could traditional Democratic voters have stayed away?  My favorite quote is still from a “socially responsible” and “fiscally conservative” friend who voted Republican because, “we have to do something about this budget.”  When I asked her if she was prepared to deal with anti-abortion legislation and gay rights amendments, her comment was, “That would never happen.”

The Republican-controlled legislature spent most of the spring session not on budget issues but instead debating putting an anti-gay marriage constitutional amendment on the state ballot in 2012 (even though Minnesota already has a law that says marriage is defined as between a man and a woman). In the 11th hour before the shutdown on June 30th, the Republicans inserted voter ID and anti-abortion legislation into the budget.  Ah, yes…fiscally responsible Republicans.

How could Minnesotans, who had elected Hubert Humphrey, Eugene McCarthy, Walter Mondale, and Paul Wellstone have fallen for this hard-line Republican hogwash?  How could my native state of Wisconsin have tossed aside Robert “Fighting Bob” LaFollettte’s legacy as if it were nothing but paper to be ripped up and shredded?

I, of course, have no blanket answers.  I know for myself, I have reflected on what more could I do to help push the conversation back to “common sense.”  I will continue to pass on the stories of our great Progressive American history as often as I can.  Did “we” as a whole forget so quickly?  I will continue to vote in my local elections and encourage everyone I know to do the same.  I will continue to attend my “town hall” meetings with my state representatives.  I will continue to stay informed on issues and ask questions of those running to represent me.  And I will never give up hope that we can return to an understanding that government is not a business.  It does not run on a “for profit” business model.  It is here to serve the people.  All of the people.  Not just some.  In the past we have figured out how to make that happen.  If we learned that once, we can learn it again.

There are no “miracles” that will transform Minnesota, any other state or Washington, D. C. back to a functioning, sane government.  It will take hard work on the part of many people.  The miracle of transformation remains with each of us.  No one can change the mess we’re in but each of us.