Single Payer — It Remains The Only Answer

Single payer – it remains the only viable option for the health care crisis this country faces and will continue to face after implementation of the Affordable Healthcare Act (ACA).

That’s the message that came through loud and clear at the Labor Campaign for Single Payer Healthcare’s National Strategy Conference held last weekend in Chicago.  Although everyone agrees that the ACA (aka, Obamacare) takes an incremental baby step in addressing the problems of our for-profit insurance health industry, the only workable option that brings real health care to all Americans is the continued push for single payer.

The title of a recently-released study by the National Research Council and the Institute of Medicine just after the first of the year confirmed what all at the conference already knew: “U.S. Health in International Perspective: Shorter Lives, Poorer Health.”  And speaker after speaker reaffirmed that the ACA does little to address the crisis.

“There was a strong consensus that the Affordable Care Act will not solve the health care crisis,” said Martha Kuhl, an RN from Oakland, California, and secretary-treasurer of National Nurses United.  “The broad support from so many labor leaders and union activists reaffirmed labor’s unique position as a strategic force to win real solutions that will provide quality care for all working people.”

“We could solve our fiscal problems if we cut out the private insurance companies and paid far less for health care like most other industrial countries,” echoed Jeff Johnson, President of the Washington State Labor Council, AFL-CIO.

The Labor Campaign for Single Payer Conference speakers and attendees passionately articulated the simple message of single payer:  Everybody In…Nobody Out. Multiple speakers showed charts and graphs from source after source that indicated how for-profit insurance based “solutions” (which is still what the ACA is) will never be the answer.  And the great union organizers – who have been the backbone of support for social movements everywhere – know that labor has to take the lead in the fight for single payer.

“Labor has to lead the fight for single payer and has to be doing more,” said Mark Dudzic, National Coordinator for the Labor Campaign for Single Payer in his opening remarks before the more than 200 gathered. “That’s been our mission and our mandate.  The reason we have more people in the room today (even after passage of the ACA) is that the crisis is still there. As long as health care is treated as a commodity vs. a right, the crisis will remain. Ultimately, this is a fight against corporate power (the insurance companies).  And people united in the communities is the only way to fight corporate power.”

The conference attendees were treated to powerful speeches by Karen Lewis, head of the Chicago Teachers Union, who successfully led last fall’s strike to push back against the privatization of Chicago’s public schools.  Her message was simple:  Connect with the people in the community – build bridges of support.

Rep. John Conyers, who introduced HR 676 (the Expanded and Improved Medicare For All Bill) was treated to a standing ovation as he told the crowd:  “I see my job as taking all of what you are doing and seeing how to translate this into a Congress that is in fact getting more Democratic but also has to become more progressive. We have to do something better than just count numbers and think something serious is happening.  We are committed to hold hearing on HR 676 in the 113th Congress, and let me append that to say if we don’t hold them inside the Congress, we will hold them outside the Congress.

“We have to match your depth of understanding with the people who make the laws.  And we have to get President Obama to listen to the progressive voices inside and outside the Congress – they are the ones who elected him.” 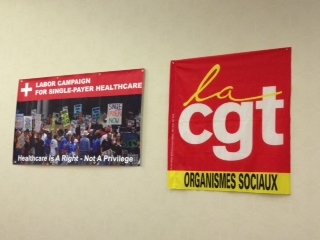 But perhaps most inspirational was the translated talk from Nicole Bernard, a member of France’s GT (General Confederation of Labour) who brought the message of international solidarity to the U.S. fight for single payer.  The French workers are facing a fight to “privatize” parts of the French national health care system.  A general strike is set for Feb. 7, in which French workers will strike to protect their current system.  Administrative cost of managing France’s nationalized health care system is less than 3 percent of benefits vs. the 20-25 percent administrative cost built into the current for-profit insurance based system in the U.S.

Kay Tillow from the All Unions Committee For Single Payer summed it up best:  “We need to tell the truth about the ACA. So many people have been afraid to say how much it will fail. Now that the election is over, let us tell the truth.  It will not bring us care (millions will remain uninsured with implementation of the ACA); our crisis will continue to escalate.

“With profit at the core we cannot make it work. The truth is what the rest of the world knows – there is a way to cut the cost and expand the care.  That’s by using a publicly funded program.  Even (Bill) Clinton said it in 2012, ‘If the U.S. adopted the health care system of any of the other industrialized countries, we could save a trillion dollars a year.’  We can’t solve anything else until we bring health care costs under control.

“Under our profit-making health care system you cannot cut costs without cutting care. Period. The only way to control cost is to remove the profit from the system.”

The move toward single payer starts with education and motivation.  I am still astonished by how many Americans know so little about single payer, the benefits of a single payer system and the inherent flaws within our current for-profit insurance driven system that puts money ahead of people’s health and well-being.

We at Wisdom Voices remain committed to promoting, educating and helping to energize the single payer movement in 2013.  Look for more in the coming weeks that builds upon the incredible energy exhibited at this national conference – from the front-line views of the nurses who see the worst part of the current health care system to the legislative action taking place at the state and national level.  And most importantly – what we as individuals can do.  Once again, the real work falls to “We The People.”

Single Payer:  Everybody In.  Nobody Out.