I woke up this morning feeling as though I had a hangover (no, I was not drinking last night).  But my head hurt and my heart ached.  What’s happened in my native state of Wisconsin has evoked in me the feelings of anger, inspiration, sadness and hope.  To put it mildly:  There’s been a lot going on in Madison this past month.

So many have written and spoken with eloquence these past days and weeks:  Michael Moore, Jim Hightower, the 14 Wisconsin state senators who deserve the John F. Kennedy award for Profiles In Courage.  Today, I feel as though I can add very little to what’s already been said.

But I can relate a story of what happened to me yesterday when my husband and I went out to eat breakfast as a local, independently owned café.  It’s the kind of restaurant where the tables are so close together you can’t help but hear another person’s conversation.  At the table next to us two men sat down and one said to the other:  “The unions took over the capitol building in Madison.”  I spoke right up and said:  “No, people went in to protest at the capitol building last night.”  And he responded, “You’re entitled to your own opinion.”

I was stunned.  How can one have an opinion as to whether people are people?  When we use words like “union” instead of people, it becomes easier to vilify and to demonize.  We are all people, all part of the human race.  We have a Supreme Court that has ruled a corporation has “personhood” but we can’t see the people in the streets of Madison as people?  My, oh my how far off course we have come.

Our Wisdom Voices site is dedicated to remembering the words of great people who have moved the human race forward, one day at a time.  After my encounter yesterday at the café, I can’t help but remember what Dr. Martin Luther King, Jr. said:  “We must all learn to live together as brothers–or we will all perish together as fools.”

Despite the setback the workers received from Governor Scott Walker, I remain optimistic and hopeful at the positive signs that have emerged from Wisconsin:  young people becoming engaged, people joining together, peaceful protesting and an energized 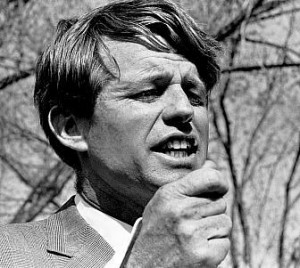 spirit that can sweep this country.  Or, to quote from Robert Kennedy: “Each time a man stands up for an ideal, or acts to improve the lot of others, or strikes out against injustice, he sends forth a tiny ripple of hope… and crossing each other from a million different centers of energy and daring those ripples build a current that can sweep down the mightiest walls of oppression and resistance.”