Have you noticed the rips in the very heart of our democracy have gotten larger and deeper in the last few years? We here in Minnesota stitched up our piece of the quilt with some of the strongest thread possible in 2012, but the whack-a-mole called voter suppression has continued to send rips and tears throughout the rest of the country. Voter suppression laws spread like wildfire after 2010 when Republican-controlled state houses and governors introduced and signed American Legislative Exchange Council (ALEC)-sponsored “cut and paste” legislation demanding voter ID laws.

In Minnesota, DFL-elected governor Mark Dayton would have vetoed any legislation that was introduced by former Minnesota Republican Secretary of State and state ALEC chairperson Mary Kiffmeyer. So instead the legislation was forced into a constitutional amendment initiative. That meant Minnesota had several months to educate citizens about what voter ID is all about. And in 2012—united behind Republicans and Democrats who spoke out against voter ID—we beat back that constitutional amendment.

Voter Suppression: Keeping people away from the polls only strengthens the corporate control already in place for our elections.

In a nutshell voter ID is nothing more than 21st century Jim Crow laws. And yes, it has been proven time and again that voter ID laws suppress proportionately more Democratic-leaning voters. The great Brad Friedman (who does more than just about anyone to fight to keep voting as the foundation of our democracy) profiled a recent study from the non-partisan Government Accountability Office that said: “Republican-enacted polling place Photo ID restriction laws in states such as Kansas and Tennessee resulted in lowered voter turnout among African-Americans as well as younger and recently-registered voters. The study will likely serve as yet more important evidence to rebut the disingenuous, cherry-picked claims by Republicans over the years that Photo ID voting restrictions do not affect minority participation.”

But voter ID laws stop all eligible voters from casting their ballots no matter what their political affiliation—and therefore by its very nature is a threat to our democracy.

Perhaps the worst violators of keeping eligible voters away from the polls in the 2014 elections come from Republican-controlled legislatures and governorships in Wisconsin, North Carolina, Ohio, and Georgia.

Three Republican judges on the 7th U.S. Circuit Court of Appeals upheld the Wisconsin voter ID law just eight weeks out from the election, throwing Wisconsin’s entire voting process into chaos. So now, early voting ballots that have been cast are no longer valid; Department of Motor Vehicle offices are mostly closed in rural areas denying people the option of even applying for a state-issued “valid ID;” and the state has allocated zero dollars to enforce the law. Estimates range as high as 300,000 eligible voters who thought they could vote on November 4 being blocked from doing just that.

In North Carolina, the Supreme Court on Wednesday allowed the state’s restrictive voter ID to stand law just weeks before the election and just days after an appellate court said the law was unconstitutional. Chaos anyone? 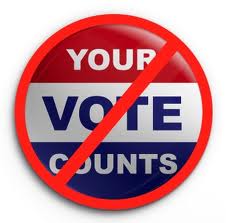 We as citizens of a so-called democracy should be outraged—and fighting back with all our might—to turn back these blocks to voting. Am I the only one who wonders what the great civil rights activist John Lewis must be thinking right now? He came within inches of losing his life during the Civil Rights demonstrations of the 1960s to fight for voting rights. And here we are, back again, limiting voting access to minorities and those whom some consider to be “other.”

The breadth and depth of voter suppression should alarm us all.

The Advancement Project is one of the country’s leading advocates to protect our right to vote and they have been at the forefront of this battle for years. As they have stated:

“The right to vote is the most important right granted to a U.S. citizen, as it is preservative of all other rights. Yet our nation’s history has involved one discriminated group of Americans after another, having had to fight for their rightful place in our democracy…In the absence of an explicit right to vote in the Constitution, states may adopt any voting laws that legally discriminate – as long as they are for reasons besides race, gender, age or ability to pay a poll tax. This is why voting discrimination remains a continuing, frequent, and growing problem in America.

“The Right to Vote initiative is a national campaign that seeks to build a broad movement that will move America to safeguard every American’s right to vote. Through partnerships and deep engagement with local community organizations, we seek to win local, state, and federal legislation leading to a Constitutional Amendment enshrining an affirmative right to vote.

“Our democracy is failing too many communities, as the cynical whims of politicians defy the collective will of the people. Advancement Project and our partners are bringing more communities together to strategically move democracy forward through the Right to Vote initiative. We the people must stand up together for fairness and justice, and dedicate ourselves to see our democracy not only as an unfinished project – but as a movement.”

In addition to state voter ID laws, let’s not forget that the U.S. Supreme Court by a 5-4 decision (June 2013) struck down key provisions of the 1964 Voting Rights Act that had been used to fight back at voter ID laws. Justice Ruth Bader Ginsburg issued a wide-ranging dissent on behalf of herself and Justices Stephen Breyer, Sonia Sotomayor, and Elena Kagan, justifying the continued vitality of the Voting Rights Act’s preclearance provision. She said, “The sad irony of today’s decision lies in its utter failure to grasp why the VRA has proven effective. The Court appears to believe that the VRA’s success in eliminating the specific devices extant in 1965 means that preclear­ance is no longer needed.”

In its simplest form any attempts to keep eligible voters from casting their ballot have always been steeped in fear. And while we cannot eliminate the human element of fear from everyone’s life, we can work to keep eligible voters from being denied access to the ballot. Here are some basics you can do to stop the conversation—either in your own head or with people you meet—that says, “Yeah, what’s so bad about voter ID?”

First, if you’ve bought into the notion that voter ID is necessary to protect against voter fraud, you’ve played right into the false narrative of voter fraud. Proven time and again that it doesn’t exist, just ask yourself —or go google it—why was it that George W. Bush’s Attorney General (Alberto Gonzales) was forced to resign? Remember him? Was it because of torture or human rights violations? No. It was because he fired U.S. Attorneys General who would not prosecute non-existent voter fraud cases. Massive voter fraud in this country does not exist.

Second, we always hear “I have an ID; how hard can it be?” It’s not just ID – it’s the restrictive government-issued ID that’s required and designed to keep people from the polls. For example, most states imposing voter ID laws are forbidding student-issued photo IDs to be used. We wrote extensively about “not everyone’s life is just like yours” when the Minnesota fight raged here two years ago. “The moral of this story is yes: Not everyone is like you. Not everyone has internet access, a car, a bus pass, disposal income for public transportation, flexible job hours, friends or family members to ask for help, an address, or a bank account. But don’t all these people still have the right to vote?” Plus you have to show ID of some sorts in order to be registered to vote. You’ve already proven who you are.

Third, voter photo ID is an antiquated way to address any voter ID issue. As the League of Women Voters wrote: “True election integrity does not come from band-aid solutions like photo ID – solutions that offer no additional level of integrity and create barriers for some voters. Instead, it comes from improving our processes for registering voters and maintaining our lists, from recruiting more election judges and ensuring that they are well-trained in current law, and from making sure that felons who have had their right to vote taken away know when and how they get it back.”

Fourth, what about who pays for this? If you can’t agree that voter ID is really voter suppression, what about your tax-payer pocketbook? Who pays for enforcement of these unnecessary laws? You do!

And finally, never forget what ALEC co-founder Paul Weyrich said years ago: “I don’t want everyone to vote.” If this video doesn’t motivate you to fight against voter suppression, nothing will.