Thank You: The Best Response

It’s taken me a day or two to just drink in the beauty of what happened here in Minnesota on Election Day 2012.  Lost in all the (legitimate) whoops and hollers of joy that resonated nation-wide, we here in Minnesota did something amazing.

Not only did we turn back a constitutional amendment on defining marriage as between one man and one woman, we romped and stomped on the “voter ID” amendment that was authored by a Republican legislator who is the Minnesota chairperson of the American Legislative Exchange Council (ALEC).  What happened here in Minnesota is nothing short of a victory of, by, and for the people.  Never have I seen such hard work by a group called Our Vote/Our Future.  Minnesotans could never repay the debt of gratitude that is owed them. 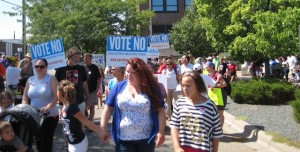 This “voter ID” constitutional amendment registered an 80 percent approval rating when it was first “introduced.”  Over the months that followed and especially in the closing 6-8 weeks, this fabulous organization worked its collective butt off – hundreds of thousands of phone calls, door knocking, organizing and never, ever giving up hope that this horrible amendment could be defeated.

By the weekend before the election, the favorable rating for the “voter ID” amendment had dropped from 80 percent approval to 46 percent approval and it failed when Minnesotans went out and voted it down.

And as great as the work of this one organization was, the individual work of former Republican Governor Arne Carlson cannot go unrecognized.  He was relentless in his efforts to educate Minnesotans about what this voter suppression amendment was all about.  He traversed the state and gave unselfishly of his time and energy.

The individual and group efforts reminded me of something Sister Simone Campbell (Nuns on the Bus) said during an interview with us earlier this summer.

Boy, did we prove that here in Minnesota.

Thank you to every individual and community group who worked for the betterment of all in the state of Minnesota.