The bittersweet reality for a native Wisconsinite living in Minnesota (which I have for more than 30 years now) is to rejoice with all the progress DFL Governor Mark Dayton has brought back to the Land of 10,000 Lakes while wincing in horror at what Scott Walker has done during his tenure in Badgerland.

Most observers knew after Walker’s re-election in November 2014 that public education would be first in the line of 2015 attacks brought on by the Koch Brothers’ king puppet. Privatization of everything has been Walker’s agenda from the beginning. Attacking public employees and the destruction of unions in 2011 was the prelude to his on-going assault on “the commons” in that state. However, I’m not sure many were expecting quite the frontal assault Walker directed at the University of Wisconsin this week. 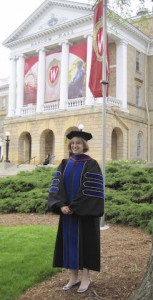 A recent PhD graduate from the University of Wisconsin. How will research at this premier university be jeopardized after Scott Walker’s $300M cuts?

To Walker, he has the ideal solution to address his state’s projected $2 billion deficit. Decimate public education much to the tune of the preverbal right-wing ditty that goes shrink it until you can drown it in a bathtub. Walker, this week, announced a 13 percent cut to the UW system — approximately $300M. This on top of cuts from the last budget, which also included a freeze on tuition. The crown jewel of the Wisconsin system and one of the nation’s premier research institutions—the Madison campus—will be hit unlike anything anyone can imagine. And not far behind it will be my alma mater, UW-Milwaukee, a vibrant public institution that is the lifeblood of that city. UW-M committee members said bluntly: These “fundamental” changes could cause UW-Milwaukee damage that would take decades to undo. The Walker budget would imperil the ability of families to afford to send their children to UWM and is unprecedented, they said. Layoffs could number as many as 40 faculty for one college alone, one member estimated.

It doesn’t take a PhD to connect the dots to what Walker is doing. This is all about privatizing PUBLIC education. Give tax breaks to the top one percent, create a budget deficit and then bleed the state’s public educational system. Freeze tuition hikes; cut the funding and the universities will find only one other avenue in which to bring money into the university—corporate funding from the likes of the Koch Brothers. And then your PUBLIC educational system will be primed to do the bidding of the one percent rather than the people of the state. Or will Wisconsin students now be turned away in favor of out-of-state applicants who pay higher out-of-state tuition?

Think this is just coincidence that defunding of public education is happening everywhere — just with a vengeance in Wisconsin? Think again. As we wrote nearly a year ago, Senator Bernie Sanders outlined what has been the Koch Brothers agenda since David Koch ran as vice president of the Libertarian Party in 1980. As Sen. Sanders tells it: “Remember, they (David Koch and the Libertarian Party) ran against Ronald Reagan because they thought he was much too liberal,” Sanders said. “Now, think of what the Paul Ryans, Rand Pauls and Mitch McConnells (and we would add Scott Walker) are saying. It’s the same thing. This (the Libertarian Party platform of 1980) is their agenda for the future. This is from the 1980s but nothing has changed. I’ve not heard one word that they’ve changed their beliefs on the America they want.” Sanders then ran the 1980 platform agenda, including what it said about education:

“We advocate the complete separation of education and state.” “Government schools?” Sanders asked. “You know what government schools are? Some of us call that public education. They believe government schools lead to the indoctrination of children and interfere with the free choice of individuals. They believe ‘government ownership’ and subsidies of schools and colleges should be ended. That means – and this is what they believe in their heart of hearts – they’re not going to run 30 second commercials on this but this is what they believe, that if you want to send your kids to school, find a private school. And if you don’t have the money, then that’s too bad. But surely you don’t want the big, bad government teaching your kids.”

How and why did we forget the benefits of public education—especially in Wisconsin, the birthplace of the “Wisconsin Idea,” a progressive philosophy more than a century old that was embraced by the University of Wisconsin System. “The boundaries of the University shall be the boundaries of the state,” it was proudly proclaimed,” by University of Wisconsin President Charles Van Hise in 1904. Van Hise declared that he would “never be content until the beneficent influence of the university reaches every family in the state.”

The Wisconsin Idea holds that research conducted at the University of Wisconsin System should be applied to solve problems and improve health, quality of life, the environment, and agriculture for all citizens of the state. Just how is that going to work with drastic cuts to the public university? And if the gaps are to be filled with funding from corporate heads like the Koch Brothers, just what will be the point of the research? And one would ask, what will be cut? We will visit the importance of the humanities in another blog.

How have citizens in so many states forgotten that whether they attend a public institution of higher learning or not, that benefits for all is what comes out of a public educational system? We are supposed to be a Democratic RePUBLIC, are we not? They are supposed to be the RePUBLICan party. The public good, the commons, we are in a society that encompasses all. We have a government—a PUBLIC entity—charged with not making a profit but with protecting the commons, what we all share.

And perhaps most sad to observe is the belittling of education. I have told the story on countless occasions: I was raised in a household in which my father, a foundry worker in Milwaukee and a Milwaukee public school teacher, never ceased to tell his children, “education for education sake. Education is something no one can ever take away from you.” Sure, he would tells us, education will lead to a higher paying job, but more importantly he stressed that the educated mind enlightens and calls us to think and reason.

As the months go by and I watch from afar at the destruction of so much of the public, the commons in Wisconsin (from selling of public assets, to the destruction of public lands, to now the dismantling of what was the envy of many public institutions across the land), I realize I cannot save Wisconsin from what it brought upon itself. I can only continue to write and talk and share my personal narrative that we once in this country held a belief that PUBLIC education was a thing of value. If we are ever to reclaim our voice in our government (our PUBLIC voice), now is the time and we are the people to do it.