Other than the Supreme Court’s Citizen’s United ruling, there are few issues that tear at the basic fabric of democracy as much as the current assault by Republican-controlled state houses to enact voter photo ID laws. These laws, which have been written by the national American Legislative Exchange Council, and then “cut and pasted” into different state legislation are aimed solely at restricting and suppressing eligible citizens from casting their vote.

Recent news about estimates of more than 758,000 eligible voters in Pennsylvania being unable to cast a ballot this November has shed a spotlight on what this law is all about – restricting access to the polls for eligible voters who tend to vote Democratic.

Does anyone remember what caused former President George W. Bush’s Attorney General Alberto Gonzales to finally resign? It was for the scandal surrounding the firing of eight U.S. Attorneys for their refusal to prosecute non-existent voter fraud. The Republican Party tried desperately to make “voter fraud” an issue from 2005-2010 and it simply could not be found – anywhere. Not in any state in the nation.

Then in 2010 the Republicans took control of multiple state houses and POOF, like magic, back came voter fraud. The Republicans couldn’t make it happen through the courts and the U.S. attorneys, so they found a much easier way. Get Republican controlled legislatures to pass ALEC legislation. Since 2010, 10 Republican-controlled states passed voter ID laws (Alabama, Kansas, Mississippi, Pennsylvania, Rhode Island, South Carolina, Texas, Tennessee, Virginia, and Wisconsin).

The reality is voter fraud is a rarity in the United States, and voter impersonation at the polls, the only incident that could be prevented by these restrictive voter ID laws, is virtually nonexistent. Most instances of improper voting involve registration and eligibility issues, none of which would be prevented by a state photo ID restriction. One academic study found photo ID restrictions would prevent less than one fraudulent vote for every 1,000 legitimate voters who would be excluded from voting by the requirement.

Simply put: If you buy into the need for voter photo ID, you simply have fallen for the lie of voter fraud. 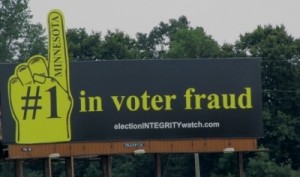 Billboard displays the lie of voter fraud. Will Minnesota fall for it? (Photo courtesy of mnpACT).

This ugly assault on democracy has made its way to Minnesota, where I reside, in a slightly different format. Although the 2010 elections brought a Republican controlled state senate and house to the Land of 10,000 Lakes, Democratic Governor Mark Dayton survived a recount vote – without either side alleging voter fraud – to take the governorship.

Running on that all too familiar jobs, jobs, jobs agenda, the Republicans turned immediately to trying to pass a voter photo ID law in 2011. Dayton vetoed it. After a shut down of the state government in July 2011, what was the first plan of action as the Republican legislature convened in January 2012? Voter photo ID again. This time though, they chose to bypass the governor’s veto and put it on the ballot in November as an amendment to the state constitution.

Minnesota – who continually leads the nation in voter turnout – now faces the possibility of limiting voter rights and forcing estimates of more than 500,000 eligible voters from casting their vote if this initiative is allowed to stand as written.

The law currently is in the hands of the Minnesota Supreme Court based on court challenges that contend the language does not represent the full impact of the constitutional amendment.

The current language as passed by the Republican-controlled state legislature states:

The Minnesota League of Women Voters does a magnificent job explaining what will really change and what’s not mentioned in the amendment language. Click here to see the document.

The BRADBlog provided one of the most in-depth analyses of how the amendment changes forever Minnesota’s rich tradition of voter turnout. Click here for more information.

2.) All voters: This would incorporate absentee ballots, forcing those who vote via mail, including many in rural areas, to be in jeopardy of casting their vote.

4.) The cost: Nowhere are voters informed of the cost of the implementation of the new system. State officials estimated the overall first-year costs to be $32.9 million statewide, the bulk of that, $29 million, going toward new poll books that would be available at polling places, according to a Humphrey Institute study. About 85 percent of the cost would be paid by local governments. The report suggests there may be hidden costs, too. It notes that Indiana expected to spend about $700,000 for additional ID cards when it enacted its law but ended up spending $10 million. 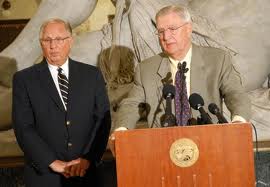 The most noteworthy opposition to this voting rights limitation amendment came from former Republican Governor Arne Carlson and former Democratic Vice President Walter Mondale. The two elder statesmen from opposing political parties came together for a joint new conference to articulate their concerns over its potential effect on Minnesota’s election system. The two penned an editorial in the state’s largest newspaper (The Star Tribune) in which they noted:

“The overall goal of this amendment is largely to eliminate election-day registration, directly affecting more than 500,000 Minnesota voters. The new law will require a government-issued photo ID listing a voter’s home address. This can be challenging particularly for students, the elderly, the military, absentee voters or anyone who moves.”

They also called out the obvious partisan nature of the bill and identified another major rub on this amendment. Legislators are elected to legislate – to do the work of bi-partisan bridge building to create laws. In their editorial, Carlson and Mondale said:

“We in Minnesota lead the nation in voter turnout, and our elections are the most honest. We have recently gone through two very close elections (U.S. Senator Al Franken and Governor Mark Dayton) and recounts without a single case of fraud.

There is a reason why — our insistence that election laws be designed in a bipartisan fashion. That is key. No party should have an election advantage.

Unfortunately, the voter ID constitutional amendment was passed by the Legislature on a strict party-line vote. Not one Democrat in either the House or the Senate voted for it. Not one.

Further, this proposed amendment does not have its origins in Minnesota, nor does it come about as a result of legislative studies of recent elections. It is a product of an organization known as ALEC, which is the creation of the Koch brothers, who amassed their fortunes in oil and who live in Florida. The goal of ALEC is to influence legislators across the nation.

Our preference is for a return to a legislative process that studies a problem first and then creates a sensible and affordable bipartisan solution. This amendment falls short on all counts.”

Anyone who supports these current ALEC-funded voter suppression bills has forgotten our strong history of expanding the vote for everyone. We dishonor the Civil Rights Movement of the 1960s and the Suffragette Movement of nearly 100 years ago by even considering bills or state constitutional amendments to limit eligible voters from casting their ballots. There should be something deep within everyone’s patriotic soul that is repulsed at partisan activities that seek to keep eligible voters from the polls.

In Minnesota, our strong hope remains that the Supreme Court will toss out the language as insufficient for truly representing what the amendment would do. If they do, it will be up to the 2013 legislature to revisit the issue. Whether Democratic or Republican controlled, or split, voter photo ID laws should never see the light of day in a country calling itself a democracy.