Just how much has changed in 100 years in this country? How common is human behavior, no matter what the era? For history lovers, it’s always fascinating to look back — even to just a relatively short time ago like 100 years — to see the old adage come true: the more things change, the more they stay the same. Or as George Santayana is famously quoted so often: “Those who cannot remember the past are condemned to repeat it.”

Over the weekend I read a friend’s blog entry. He’s a lover of sports history and the author of Coach For A Nation: The Life and Times of Knute Rockne, which recently won a national award. In his blog he acknowledged the 100th anniversary of the famous Notre Dame football coach’s graduation from the South Bend institution. And while it is a tip of the hat to the great coach, I was most struck by the references to the speeches given at the 1914 commencement ceremonies.

He writes: “The 70th commencement of the University of Notre Dame opened on Saturday evening, June 13, 1914, when the Honorable Eli Watson, former U.S. congressman from Indiana, “delivered a powerful and eloquent oration” decrying the perceived ills of socialism. At Monday evening’s final exercises, the commencement speaker, U.S. Sen. Joseph E. Ransdell of Louisiana, spoke at great length, and with great force, about the scourge of divorce in American society.” 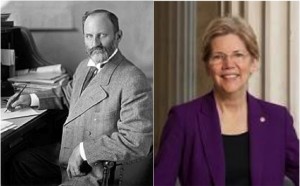 A quick check on the Honorable Mr. Watson indicates he was anti-labor in an age of the first robber barrons; was the Republican house “whip”; and after his stint in Congress became a lobbyist for the American Manufacturers Association. Sound familiar as we listen today to the constant cries from many about the socialist in the White House? And Ransdell, although credited with creating the National Institute of Health, appears to have been taken aback by the women’s movement hitting its stride in early part of the 20th century. He introduced legislation in the Senate to create a constitutional amendment to prohibit divorce. In his speech, given to an all-male undergraduate audience, he called divorce the greatest threat to the nation. So 100 years later, we still see women fighting the heavily male dominated and conservative state and federal legislatures seeking equal pay, health care autonomy, and a living wage to support their families.

Today it’s sometimes difficult to remember that the Catholic Church had a strong commitment to social justice 100 years ago as it served an emerging immigrant population struggling with economic insecurity in a new country. Yet, the church often rose to the occasion to promote the public good and the common man. Most notably is Monsignor John Ryan’s “ Living Wage” doctorate thesis.

It was at this commencement address a century ago, that the Rev. Francis H. Gavisk of Indianapolis moved the discussion to a higher plane than did his fellow speakers. The speech was noted for “the excellence of his address, its practical character, and significant appropriateness.” As noted in the blog, at one point, Father Gavisk intoned:

“See how social service can be ennobled by Christian motives of action. The Catholic young man should, moreover, recognize his debt of gratitude to all that went before him, to his parents, to his teachers, to his University, to his community – all the complex factors that have made his opportunities possible. He is the heir of the accumulated treasure of public good that has been amassed for him, and his ambition should be to add to that store all that he can to make for better civil, social and religious life. This is the true public spirit. All perhaps can not take a leading part in public life in the commonwealth and in the Church, but all should have the spirit of public service, to make the world in which he lives a little better for his having been in it, to make the Kingdom of God in his own environment all the stronger and more glorious for his part in it. No man worthy of the day can sit idly by and be self-centered in his own private interests. The truest ambition is so to employ life as to be of the greatest service to others.”

Who wouldn’t love to see Father Gavisk read that speech today to Paul Ryan and others who embrace Ayn Rand’s Atlas Shrugged and the adoration of individualism. It’s people today such as Senators Elizabeth Warren and Bernie Sanders who passionately speak of a society in which we’re all in this together and what we do is built on the shoulders of those who walked before. We have quoted from the great Parker Palmer on multiple occasions: “…As important as it is to attempt to influence the government, it is even more important to renew the life of the public. Without a public which knows that it shares a common life, which is capable of feeling, thinking, debating, and deciding, politics becomes a theatre of illusion, with everyone watching the drama on stage, hoping to play some part, while the real action goes on backstage in the form of raw and unrestrained power.

And from the spiritual or organized church setting, we now have the brilliant voice of Pope Francis front and center making headlines since last year’s Apostolic Exhortation Evangelii Gaudium and his condemnation of consumerism, trickle down economics, and his critique of the modern capitalist economy. From that encyclical has come a quote making the rounds on Facebook and Twitter memes:

“One cause of this situation is found in our relationship with money, since we calmly accept its dominion over ourselves and our societies. … The worship of the ancient golden calf has returned in a new and ruthless guise in the idolatry of money and the dictatorship of an impersonal economy lacking a truly human purpose. The worldwide crisis affecting finance and the economy lays bare their imbalances and, above all, their lack of real concern for human beings. …”

Sometimes it’s helpful to remember that this isn’t the first time we’ve gone through what appears to be a totally upside down political and social environment. And yet, I often wonder, how is it we so quickly forget our past; forget to tell our proud progressive history; to share with our families and friends the ideals of a society working for the betterment of all.

More than 100 years ago this country struggled with changing social demographics. There were those then who spoke about fear and condemnation and yet there were calming voices that reassured us about public service and common ground. One way to cut through the noise that divides us is to find those today who speak to the better sides of ourselves. It’s not to late to listen to the voices over the last 100 years who knew that public service vs. greed was the path we should pursue. Imagine if corporate CEOs and local, state, and federal politicians would remember the commencement address 100 years earlier: “The truest ambition is so to employ life as to be of the greatest service to others.”

This entry was posted in Religion and Politics, Social Justice, Thoughts on Life. Bookmark the permalink.