The Movement Is Afoot 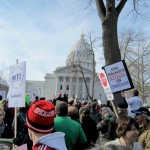 From Madison to Occupy Wall Street

There has been so much written in the blogosphere since the Occupy Wall Street Movement started that one’s head could almost literally begin to spin.  I believe most of us are so excited that we can hardly sit still as we finally watch action take place to turn this country back from what can simply be described as insanity and greed.

I know for me the last two years have been difficult to process.  Like many, I thought the election of Barack Obama would be an instant wipe-away of 30 years of a continued move to the conservative right.  But such was not the case.  The reminder for us is that the more-than-30 years of creating problems will take some time to fix.  It will not happen overnight.  But at least we now have a sense that the turnaround has begun.

In the last six months, I’ve had the pleasure to interview those at the forefront of today’s progressive battles; I invite you to read some of these Progressive Profile features as a reminder that there are many working diligently to help reclaim democracy for ‘We The People.’

A sampling of their wisdom includes this from Parker Palmer, recently named one of Utne Reader’s 25 People Who Have Changed the World:

“When we generate utopian visions and hope to make them happen soon – when we elect Barack Obama and expect all our problems to be solved, and solved quickly, by his presidency – the outcome is both predictable and tragic. That is not the way to engage social change in a democracy. And it is not the way to help democracy itself survive and thrive. Democracy is a non-stop experiment. Each generation must help sustain it, which means being in it day-by-day for the long haul.”

I’ve watched and admired the hard word done by Mike McCabe and The Wisconsin Democracy Campaign.  Here’s what Mike had to say in July:

“There is always hope. We have entered a new Gilded Age. The last time wealth and political power was concentrated in so few hands, it inspired a progressive movement that banned corporate campaign contributions and election spending, took politics out of the back rooms and gave power to the people through election reforms, all of which led to things like workers compensation, unemployment compensation and the progressive income tax. And set the stage for the New Deal, the creation of Social Security and so much more. What we are living through now will provoke a similar popular uprising. I don’t have a good enough crystal ball to know when, but once we sufficiently expose and ultimately criminalize today’s legal bribery and do away with the resulting wealthfare benefits, that’s when we will get single-payer health care reform. That’s when we will see a serious effort to break our addiction to fossil fuels, build a new green economy and arrest global climate change. That’s when promoting the common good will become less uncommon.”

Where will the Occupy Wall Street movement lead?  Of course, no one knows.  But once a movement like this starts, it will never be bottled up and put back on the shelf.  For those of us history buffs, this is another reminder that it is our generation’s turn to carry the progressive torch.  Too often we forget our proud progressive history and the stories that came from it.

Am I the only one to have seen the spirit of Fighting Bob LaFollette resurrected in the Wisconsin protests of last winter and spring?  Can’t you hear Howard Zinn and Daniel Berrigan urging on the protesters in all of the Occupy sites around the country?  Or listen to the great wisdom of that wonderful activist Grace Lee Boggs who at 96 still sees great possibilities to come.  She articulated this vision a few years back:

“I believe that we are at the point now, in the United States, where a movement is beginning to emerge. I think that the calamity, the quagmire of the Iraq war, the outsourcing of jobs, the drop-out of young people from the education system, the monstrous growth of the prison-industrial complex, the planetary emergency, which we are engulfed in at the present moment, is demanding that instead of just complaining about these things, instead of just protesting about these things, we begin to look for, and hope for, another way of living. And I think that’s where the movement — I see a movement beginning to emerge, ’cause I see hope beginning to trump despair.”

One of the reasons I wrote, edited and published Wisdom of Progressive Voices was to help us remember our great American Progressive past.  I invite you to browse through the book (link), consider ordering copy to help support the Recall Walker efforts underway in Wisconsin and mostly to inspire us as we move forward.  Or as E.J. Dionne told Rachel Maddow recently:

“The Tea Party has done a good job of rewriting the American story to make us an entirely individualistic, anti-government nation.

“We progressives have defaulted by not celebrating our own history, and grabbing our own history and saying, ‘No, this is not who we are as Americans.’ Americans have always seen that cooperation and individual success go together.

“So there has been this concerted effort to rewrite the history books and to change our politics so we give up these partnerships which have actually made us a great country.”