The Next Generation of Progressive Leaders

Did you ever wonder where the next generation of progressive leaders was?  Did you think that once Dennis Kucinich and Bernie Sanders retired that the progressive voice on the national stage might be stilled?

After talking with Andrew Gillum, director of the Young Elected Officials Network, (YEO) one doesn’t need to speculate any longer on the viability of strong leaders committed to progressive political action.  The enthusiasm, passion and commitment exhibited by Gillum in his work to unite newly elected young officials provide a source of encouragement for all. 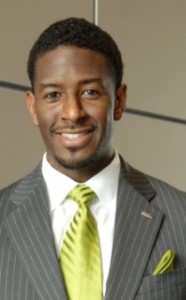 “Educational inequalities, criminal justice inequalities and a range of other issues that exist helped provoke the recent activism (the Occupy Wall Street movement),” Gillum said.  The generation of policymakers that I work with in the Network understands the inequality that is systemic and endemic throughout the system.  They are up to speed on many issues.  They get it.  Even on the issue of the Supreme Court and its Citizens United ruling…it has incited this generation of young people activists, organizers and elected officials to say, ‘something has to be different.’

“I interact on a regular basis with people who are living “hope and change” in a very real way.  It’s not being broadcast on CNN or the networks.  Yet, the work they are doing is happening in discrete corners of the country where the grassroots people are.

“My colleague in Missoula, Montana was able to get a ballot initiative passed saying corporations were not people.  These are the moments that reveal ‘yes, not all is well in our country, but that there are leaders who are willing and prepared to stand up and to try and make things right for the future.’  And that’s why YEO is so important.  We can take the example of what happened in Missoula and broadcast it to a network of 700 elected officials around the country that then sparks actions in communities nationwide.”

The Young Elected Officials Network is a program of People For the American Way Foundation that began six years ago when 64 newly elected young officials were brought to Washington, D.C.  Think back to 2004-05.  Not exactly the period of enlightenment for progressives.  But it was in that framework that a “safe haven” began to help newly elected young progressives.

“We wanted to let them know they were not alone in this work,” Gillum said.  “Secondly, we wanted to help them with their own professional and personal development and training…to recognize that what we didn’t have in age and experience we needed to learn.  We had to figure out what tactics would help us be more effective.  And lastly, we needed to gain tools that would give us access to the policy resources that are so important to help us implement the change we know needs to happen.

“What’s unique about working with young elected officials is the fact that they are new to the process.  They tend to be more courageous whether that’s through sheer courage or naiveté.  They are willing to take positions that are sometimes outside of the mainstream.  Our goal is to lasso that creative energy dispersed randomly throughout the country in a more synergistic way so that we can see those efforts and realize that it doesn’t just happen ‘here’ but that we can learn from the experience of others and proliferate it around the country by building stronger and stronger momentum toward good public policy.”

Although a 700-member strong organization is a great beginning, Gillum is quick to point out that it’s not representative of the percentage of the 35-and-under population in this country.  “Almost a third of the population fits into that category and yet we are less than five percent of the elected officials,” he said.

And which issues does Gillum see today as “generational” rather than political or philosophical as these next young elected officials begin their political futures?

“I would point to energy, LGBT rights, and marriage equality, as the hallmark generational issues,” Gillum said.  “There are people in my generation, be they conservative, liberal, Democratic or Republican who recognize the need to do something about green energy and global warming.  Yet, we have a generation of politicians who are still debating the ‘truth’ of that issue.  It’s such a different world.

“The idea of marriage equality for my generation…well, it’s as common to us as breathing air.  The fact that there are gay, lesbian, transgender people …they are our friends, our family members, our church members.  The fact that we still have a culture war for the political mainstream about equality among sexual orientation is again, a huge disconnect from where this generation is.  It gives you a stark contrast between the generational divide.  And so the leaders that we are helping to support, to encourage and to develop…they will one day be members of congress or governors of states or maybe even a president of the United States  Those will be the battles of yesteryear.”

Andrew Gillum, the youngest person elected to the Tallahassee, Florida, City Commission, serves as the director of the YEO Network.  As one of seven children, whose mother was a bus driver and whose father was a construction worker, Gillum says his life serves as an inspiration for the work he now does. 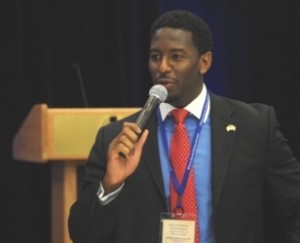 For me, it is so fundamental to understand where government picks up and the need in this country for a strong social infrastructure as well as a strong federal government and a strong private sector and policy that helps close this wealth divide that exists today.

“My parents had to work 2-3 jobs and they were still not able to make ends meet in this country,” Gillum said.  “They did everything in their power to provide for their family and it just wasn’t enough.  For me, it is so fundamental to understand where government picks up and the need in this country for a strong social infrastructure as well as a strong federal government and a strong private sector and policy that helps close the wealth divide that exists today.

“A worker’s rights agenda to me would be an agenda of the household I grew up in.  It is fundamental to who I am and it is why I am a progressive.  It is also the impetus for why I am a fervent advocate for inclusion and aim to create social and public policy that speaks to the root of the problem and not the symptom.”

We invite you to listen to more of Andrew Gillum’s thoughts – in his own words.

To get a flavor of the “coast-to-coast” connection of the YEO Network, check out the list of young elected officials elected in 2011.

Perhaps one of the best examples of the network’s leaders includes Wisconsin State Senator Chris Larson.  Larson was one of the 14 state democratic senators who left the state last winter and slowed down the legislative process that helped to bring national attention to the anti-working agenda of Wisconsin right-wing Governor Scott Walker.

“The first (YEO) event I went to was in May 2010. I was a county supervisor at the time and just considering running for state office.  It was where I could talk to other young people who had gone through the same things and in fact there was another young official going through the exact same thing (deciding whether to run for state-wide office),” Larson said. “It was tremendously helpful to be able to compare notes and was a huge factor in helping me decide to take on an incumbent and run and eventually win. 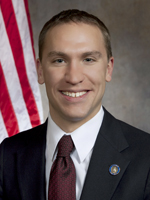 “I think each generation worries that the next generation isn’t going to be able to live up to the legacy that was chartered before it.  But what I feel confident about is that there is a new generation coming in. I believe there are at least a half a dozen YEOs running for Congress in 2012.  There are people who are stepping up and are looking to lead.