Amidst the horror, pain and sadness that swirls around State College, Pennsylvania, and the Penn State University campus this November, one simply must take the obvious look at the similarities between this scandal, the sex abuse scandals of the Catholic church, and yes, the abuse and rape done by Wall Street.

Every writer or commentator who has spoken on the atrocities in “Happy Valley” has acknowledged (and rightly so) that the number one thing on everyone’s mind are the victims, their families and how these incidents have changed their lives forever.  But without deep reflection by university officials, college football fans and indeed all of us on the how and why yet another abuse of power by individuals and institutions was left to prey upon innocent victims, the opportunity for real change in our society will be lost.

The thread that ties the Penn State and Catholic church sex abuse scandals is obvious to even casual observers.  Substitute the word archbishop for athletic director and parish priest for assistant coach and there is little difference between the two.  But the deeper connection is the institutional power structure that allows both a football program and an organized religion to throw away basic concepts of right and wrong because of power, control, and greed.  Talk all you want about either of the scandals and it ultimately comes down to those three words.

We have turned into a society that says it is more important to protect an institution than to utter the words that make us human:  We have failed; we have made a mistake.  It’s not always easy to say and admit that, but the consequences for failing to acknowledge our humanness has been enormous.

I found myself dusting off my copy of David Callahan’s The Cheating Culture:  Why More Americans Are Doing Wrong to Get Ahead.  His 2004 book is as relevant today as it was then.  Cheating is nothing more than a direct action of power, control and greed.  And when any part of society is rife with greed, cheating and lying, the word “integrity” and knowing the difference between right and wrong has most likely disappeared.  In the book, Callahan references Yale law professor Stephen Carter who says integrity requires three steps:

3.         Saying openly that you are acting on your understanding of right and wrong.

Callahan follows that with:

“Notions of right and wrong are not only shaped by our family and friends and by work or academic environments, but also by the broader culture. As we go through life, the culture’s prevailing values or social norms, shape our ideas about what constitutes the good life and how hard we should labor…You have to understand how the values of American society have changed over the past quarter of a century.  Simply put, we have a nastier, more cutthroat set of values than previous generations did.  As the race for money and status has intensified, it has become more acceptable for individuals to act opportunistically and dishonestly to get ahead.  Notions of integrity have weakened.  More of us are willing to make the wrong choices, at least when it comes to money and career.”

My belief is that former Penn State football coach Joe Paterno put aside what he knew to be right and wrong because he saw the dollar signs and the power he held.  On one side of the thought process was “doing the right thing;” on the other was “my football program, my status, my legacy, my pension (my ego).”  When he reported the incident to his athletic director, the same thought process kicked in:  Millions of dollars in revenue or do the right thing.

Flip that to the Catholic church and ultimately you have the same thing:  Help the vulnerable young boys who have been wronged or risk unraveling one of the most powerful institutions in the world. 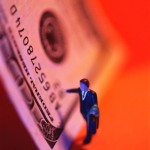 Wall Street?  How different is the out-of-control power and greed that propels the individual internal engines of every CEO or hedge fund manager from that displayed by Penn State or the Catholic church?  The idea of right and wrong is simply lost.  One of the major accomplishments of the Occupy Wall Street Movement has been its ability to put front and center a very simple message:  Our values as a society are totally unbalanced.

A movement is afoot across this country.  It’s no accident that Occupy Wall Street and the collapse of a powerful football program are happening at the same time.  We have turned college football into something it was never meant to be: a multi-million dollar industry.  Organized religion has morphed over the centuries into something that its original prophets never intended it to be.  And our financial institutions have made us look at money as the be-all and end-all of our lives.  There is more to our human existence than selling out our souls for printed greenbacks or gold.

It is up to all of us individually to work to reclaim a character for our nation, our youth and ourselves that is better than where we are today.  Let’s hope we don’t waste this opportunity for reflection and change or these young boys and their families will once again have suffered in vain.