This Is The Issue; There Are No Other Issues

If you think the insanity of money spent on political races is at an all time high, you are correct.  In the wake of the Citizens United Supreme Court ruling, many believed that the unlimited amount of money pouring into political campaigns would be “over the top.”  But even those “in the know” are finding the spending frenzy amazing.

Take the Wisconsin state senate recall elections that came to a dramatic close Tuesday night (August 9). Mike McCabe, executive director of the Wisconsin Democracy Campaign, a nonpartisan group tracking the flow of money in Badger state politics, said, “This is so out of whack from everything we’ve ever seen.” On the weekend before the recall elections were held, it was estimated that nearly $31 million (that’s right, $31 million for state senate races) was spent.  That compares with $3.75 million for the entire slate of all Wisconsin senate races in 2010.

That’s just one example of what Citizens United unleashed.  The same scenario is being repeated across the country and serves as a harbinger of what to expect on a national level in 2012.  One wonders if the electoral system can sustain itself with this type of financial lunacy at play.

Campaign Finance Reform.  The end of Citizens United.  Those two phrases cannot be repeated enough by those concerned with our democracy.  In a nutshell, Citizens United (in a sharply divided 5-4 ruling) decided that the American people are powerless to stop corporations from using corporate funds to influence state and federal elections. The ruling overturned two previous cases where the Court ruled that Congress and the States may try to keep corporate money out of politics.

Jim Hightower offers another view of the deep consequences of the rulings of the John Roberts Supreme Court in his recent piece: Why are we letting corporate Supremists steal our democracy from us? (http://www.hightowerlowdown.org/node/2727)

Free Speech For People (www.freespeechforpeople.org), a national non-partisan organization, is one group diligently working since the day of the Citizens United ruling to educate American voters about its devastating impact and what can be done to overturn it.  The group is pressing for a 28th Amendment to the Constitution to restore democracy to the people and to ensure that people, not corporations, govern in America.

It may seem like a daunting task, but one that must be pursued, according to John Bonifaz, co-founder of Free Speech For People. 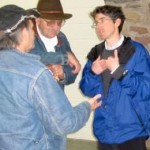 “The Citizens United ruling presents a serious and direct threat to our democracy, unleashing a torrent of corporate money in our political process unmatched by any campaign expenditure totals in our history,” Bonifaz said.  “The ruling also marks the most extreme extension yet of a corporate rights doctrine that has placed corporations over people.

“We must begin the process of restoring the Constitution and fair elections to the people. While there are many calling for legislative fixes—including public funding of elections, which we support—we must face the reality that only a constitutional amendment will enable us to reclaim free-speech and other constitutional rights for people, not corporations.”

“For the first 200 years of our nation’s history, corporations were never defined by the courts as persons with free speech rights under the First Amendment.  Only in recent years have we witnessed this corporate takeover of our First Amendment, culminating in the Citizens United ruling.”

Bonifaz and Free Speech For People take an historical look at amending the Constitution to keep them energized as they continue the battle.  “Americans have amended the Constitution repeatedly since the Civil War to expand rather than dilute democratic participation of people in elections,” Bonifaz said.  “Most of the 17 amendments that followed the 10 amendments of our Bill of Rights were adopted to defend and expand our democracy.”

In case you need a refresher: Constitutional amendments ended slavery; guaranteed liberty, due process, and equal protection for all; guaranteed the right to vote regardless of race; empowered the people to elect senators, who previously were appointed by state legislatures; guaranteed the right of women to vote; eliminated the poll tax, previously used to block poor people, often African Americans, from voting; and established a standard voting age.

How Does One Amend The Constitution?

Other than via a constitutional convention, a two thirds majority vote in both houses of Congress begins the process.  The proposed amendment must then be approved by three-fourths of the states; in other words, through the support of engaged, educated American citizens.

It appears a strong basis of the support is already there:  According to a Hart Research Associates poll released by Free Speech For People, 82% of American voters believe Congress should take action to limit corporate spending in elections, and 79% of voters would support an amendment making clear that corporations do not have the same rights as people under the Constitution. The survey also revealed that support for an amendment transcends party lines, with large majorities of Democrats (87%), Independents (82%), and Republicans (68%) supporting its passage.

What Can One Person Do?

Too often we hear the electorate bemoaning, “What can I do?”  This is one instance where organized people can take a stand against organized money.  Free Speech For People offers a list at their web site of simple things that everyday citizens can do to start the hard work to amend the Constitution and stop the damages being done by the Citizens United ruling.  Perhaps, for many, just learning and knowing about Citizens United may be the first step.  Becoming educated, informed, and engaged is a must.

Many of us have what we like to think of as our “favorite causes” to which we throw our support – be it environmental issues, single payer health care, voting rights, etc.  However, the chance of progressing on any issue today with corporate power maintaining such a gridlock over every level of elected official in this country remains slim.  To borrow from a phrase from Paul Newman in the movie The Verdict:  This (stopping unlimited corporate expenditures and the corporate takeover of our government) is the only issue.  There are no other issues.