‘This is What Democracy Looks Like’: A Visit to Madison

We are native Wisconsinites.  We have a daughter currently pursuing a Ph.D. at the University of Wisconsin-Madison.  Madison is a five-hour drive from where we live, so this past weekend, my husband and I drove to visit our daughter and to see what’s been happening in the state of our birth.

I’m happy to report that both our daughter and the city are doing quite well.

The sight on Saturday in Madison was nothing less than historic, inspiring, and humbling.  More than 30,000 (my estimate) people braved the snow that fell overnight, the damp air, and a piercing wind that cut to the bone.  What remarkable courage these people have shown for more than three weeks.  And their humor is still strong.  The most popular protest “prop” displayed Saturday was an inflatable palm tree:  a clear reaction to the continued Fox News lies about what is going on in Madison.

It is the demonstrators’ perseverance and the conviction of their beliefs, however, that is most striking.  Hand-made sig

ns, drawn on everything from poster board to grocery bags, showed a deep support for working families, and disgust with what this radical governor is doing.  There were so many signs, it was hard to read one before another walked past.  Some of my favorites:

And on and on they went…all day in the freezing cold.  Peaceful protesters with not a hint of agitation or violence. Wall-to-wall people marching around the Capitol Square.  The signs said they were from Sister Bay (in Door County), Whitewater (near Madison) and Wonewoc (in the hills near LaCrosse).  Trade union members — Teamsters, Pipefitters, Boilermakers.  Cops, including a group of New York State Troopers. 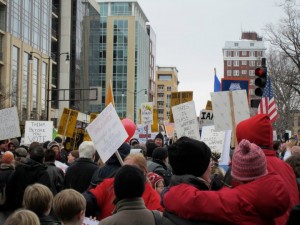 The incredible speech delivered by Michael Moore in a surprise visit was like frosting on the cake to the crowd.  Wisconsin folks know what they are fighting for.  These are the faces of average Americans, who want nothing more than to work for a living, to be paid a living wage and to educate their children. And if they are lucky, to have time to spend summer days at a cabin “up north.”

They are not the ones who bundled sub-prime mortgages into ‘toxic waste’ and created default swaps and derivatives, imploding our economy.  They did not defraud the country or ship jobs overseas to create obscene profits for multi-national corporations.  They are honest, hard-working people, who still believe a middle class existence is possible in 21st century America.  Why are we vilifying them while the criminals on Wall Street walk free?

And their display of their beliefs is unprecedented.  On Sunday morning, over coffee and conversation, one friend remarked:  “In my 40 years of working in or around the capitol, I’ve never seen anything like this.  There have been 10,000 protesters who have come to Madison for a day to support a cause and then they leave.  But for protestors to be here this long and with this many…I’ve never seen anything like this.”  The friend also reported that Governor Scott Walker was greeted by 500 protesters when the governor attended a function Friday night at the Columbus (near Madison) Country Club.

No one knows where or how these protests in Wisconsin will end.  One thing is for certain:  Whatever happens, it is NOT the end.  This is the beginning of what can be a national movement to bring back a middle class to this country.  We’ve done it before with the support of organized labor (re-read your American history from the turn of the last century if you’ve forgotten or don’t know).  We can do it again.  What started in Madison and continues today needs to be duplicated across this country.

On, Wisconsin! And thank you Madison for your courage, convictions, and perseverance.

This entry was posted in Wisconsin Politics and tagged Scott Walker, Wisconsin demonstrations. Bookmark the permalink.