Grassroots organizing.  Local communities reinserting themselves into the decision making process that impacts their communities. “We the People” reclaiming our role in democracy.  Those elements serve as the most effective tools at our disposal today to fight the environmental battles of the 21st century says Thomas Linzey, Executive Director and co-founder of the Community Environmental Legal Defense Fund.

“There cannot be sustainability unless people who are impacted by certain decisions are actually making the decisions about what impacts their communities,” Linzey said in a recent interview with Wisdom Voices.  “We live in a system in which our communities have been systematically divested of almost any governing authority to say ‘no’ to the types of projects such as fracking coming into their communities. 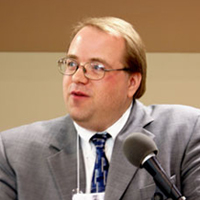 Thomas Linzey: Communities generally believe that someone is looking out for them and intervenes in an unjust situation for them. And generally that’s just not true.

“And, if local communities attempt to then ban the use (like a corporate factory farm, or fracking project), then they are sued by the corporation whose project has been affected. And, through that suit, the corporation can demand damages from the municipality for “interfering” with its use. That result is produced by a combination of the doctrines of preemption (by which state law via the permitting process overrides any local control) and through corporate “rights” (by which corporations have certain constitutional “rights” to property that the municipality is then interfering with).”

Sound a bit daunting to those local communities trying to keep corporations from polluting or changing the environmental landscapes around the country?  That’s where Linzey’s organization comes in to help.

“The joke here is that we are the law firm of last resort,” Linzey said.  “People usually contact us after they’ve tried everything they’ve been told to do and still find they don’t have a remedy.  We’ve learned to have a lot of patience, because initially people think the system is something that it isn’t.  People don’t understand how the system works until they are in the jaws of it.  So, for example, if a factory farm is moving in next door, someone may say to themselves: ‘This is going to cost me 60 percent of my property value.  Surely, the system compensates me for that.’ And lo and behold, the system doesn’t.

“Communities generally believe that someone is looking out for them and intervenes in an unjust situation for them. And generally that’s just not true.  We have to explain to them that logically it isn’t true.  That in fact there’s a system of law created over the past 200 years that is all about resource extraction and use and not about the rights of nature or of people in communities.  The laws were established to protect production and commerce at all costs. That’s how the Constitution was written and it was a natural thing because the people who wrote the Constitution looked out and saw an endless bounty of natural resources.  Their interest was in building a nation state, not necessarily in advancing rights, especially at the expense of the production and the commerce that was necessary to build a nation-state.

“So what we got was a Constitution that put the rights of production and commerce above communities and nature. The Founders didn’t know anything about deforestation and global warming. They just thought that to become a great nation state you had to exploit your natural resources, and god knows they did a wonderful job with this Constitutional system they put in place.

“We are now in a different time and that means we need to look at what a new structure of governance looks like that wasn’t written in the 1790s.  But rather one that’s written today for the contingencies we are facing.”

And slowly but surely local communities are organizing and fighting back with new laws.  Currently, the Environmental Legal Defense Fund operates in 24 states and is creating an international presence.  “We assisted Equator with the drafting of a new constitution in 2008 that includes a ‘Rights of Nature.’  It’s a concept in which ecosystems in nature have the right to exist and flourish independently of human use of those natural resources.  It makes Equator the first country in the world to move from a property-based system of environmental protection to a rights-based system of protection.

“We now get calls from Nepal, Italy, different locations around the globe from people with a recognition that the existing systems we have that treat ecosystems as property just aren’t working and will eventually guarantee that the ecosystems we have will be extinguished.  This is actually one of the exciting pieces of our work, to see that we are beginning to move away from a corporate created system of protection toward one that is ecosystem centered.”

The work of community organizing and local governance restructuring is also happening within the United States.  Linzey points to the example of the City of Pittsburgh, whose city council in 2010 adopted a local bill of rights banning fracking of natural gas from the city, as one of the best examples.

“I’m inspired by the 140 municipalities in seven states who have said: ‘We’re done with the regulatory route.  We’re going to move to make new laws that actually protect our communities from these types of projects and corporations.’  So every day brings a new success story in terms of communities standing up on their feet and refusing to use the ‘corporate tools’ they’ve been left with to try to slow down environmental destruction.

“What we need now is for those 140 communities to become 10,000 and then those 10,000 communities need to stitch themselves together and push state constitutional change.  That’s when you begin to change the basic DNA of the system.  And then you have to have enough of those states join together for a federal Constitutional change.  A movement needs to be created, one that expands civil, political and environmental rights out at the local level and then drives it upwards against those other systems.  That’s when real change happens.

The Community Environmental Legal Defense Fund web site provides a full list of resources available and offers a wealth of information including updates from communities around the country in their efforts to fight back against fracking, factory farms, and other environmental issues.

“We’re beginning to awake from our slumber,” Linzey said.  “For decades we’ve ‘left it to the professionals’ to take care of the environment and the think was that that was good enough.  People are now figuring out that the professionals have things to gain from the system they created.  It’s up to us now.  The national government isn’t going to save us.  The state government isn’t going to save us.  It’s up to the communities to create this new system of law.”