Those of us who grew up in the 1960s watching TV game shows may recall one of the classics: You Don’t Say. The show’s sign off from host Tom Kennedy went something like… “Remember, it’s not what you say that counts, it’s what you don’t say.” 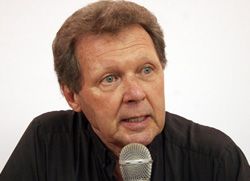 Ray Bourgeois: We are not made for war

Who knew that nearly 50 years later that clever little saying would apply to what’s become discourse in our conversations on politics and economic and social justice issues. The headlines – be they on Twitter, Facebook, or the old fashioned kind in daily newspapers – fail to inform us or discuss the real issues that so desperately need our attention and debate.

One critical example. During one political party’s national convention last week, this headline screamed at us: “US-Led Bombings in Syria Kill 77 Civilians, Including Many Children” Did you see it? Did you hear the national media talking about it? Do we ever talk about or debate US-led drone airstrikes?

And what about the discussion concerning the U.S. military budget and how we at home are impacted by our never-ending wars? Who in the national, corporate-controlled media is leading this discussion: America’s Wars Come to “the Homeland”? Who in either of the two major political parties wants us to connect dots or even talk about what Tom Engelhardt wrote as part of that article?

“Strangely, amid the spike in racial tensions after the killing of two black men by police in Louisiana and Minnesota, and of five white police officers by a black sharpshooter in Dallas, one American reality has gone unmentioned. The U.S. has been fighting wars—declared, half-declared, and undeclared—for almost 15 years and, distant as they are, they’ve been coming home in all sorts of barely noted ways. In the years in which the U.S. has up-armored globally, the country has also seen an arms race developing on the domestic front. As vets have returned from their Iraq and Afghan tours of duty, striking numbers of them have gone into police work at a time when American weaponry, vehicles, and military equipment—including, for instance, MRAPs (mine-resistant ambush protected vehicles)—have poured off America’s distant battlefields and, via the Pentagon, into police departments nationwide.”

Robert Koehler is not afraid to say what counts in his recent post, Volatile America:

Indeed, the war — and the trillions of dollars it costs — go virtually unmentioned in the surreal race for the presidency that’s currently underway. Also unmentioned is the fact that the war is being brought home to our gun-saturated society by former soldiers fighting back against racist policing the way soldiers always fight back: They’re killing “the enemy.”

We were reminded of this non-discussion and not saying anything about war the other day when one of those Facebook Memories popped up on our “news feeds.” The memory reminder linked to our progressive profile from four years ago in which we featured peace activist Father Ray Bourgeois. In the profile we highlighted his eloquent talk at a peace event and how he told the audience: “We are not made for war.” Four years ago – in the midst of another presidential campaign – he said:

If you google anything about that 1960s game show, you’ll find this reminder on the show’s introduction: “Today, (insert celebrities’ names) are here with us on YOU DON’T SAY! Now here’s your host, TOM KENNEDY”

Will we allow another presidential campaign season to be like a game show? Insert “celebrities’ names” and watch them focus on what they don’t say? It’s up to us to demand more.

We are not made for war.

Help lead the discussion on peace and non-violence– and demand our political candidates talk about the horrific price we pay when we don’t say the words: drones, war, invasion, and empire.